Are you ready for some hyperbole?! A guide for those who are not big-time NFL fans but who still plan to watch the game

It’s almost time for Super Bowl Sunday, America’s annual pageant of hyperbole, excess and, somewhere in there, football. Here’s a guide for those who are not big-time NFL fans but who plan to watch the game anyway because: nachos.

The Denver Broncos, one of the league’s elite franchises, will be taking on the Carolina Panthers, who also play football. The Panthers were lousy last season—but this year they lost only one game and are favoured by 4.5 points against the overmatched Broncos. If you want to sound “in the know,” you can say things like, “I’m betting Carolina minus 4½,” or, “I’m laying $500 on Denver because I have a head injury.”

Carolina’s Cam Newton is impossibly athletic and congenitally jubilant. He is known for celebratory dancing and for presenting the football to an adorable child after each touchdown. Naturally, sports pundits hate his guts. They bellyache about his “showboating” ways. This is yet another reason for Sportsnet executives to green-light my proposed reality show: Let’s Lock Some Sports Pundits in a Basement!

Denver’s Peyton Manning is one of the greatest QBs in football history. He is also a 39-year-old man who has endured four neck surgeries. At this point, Manning’s brain is connected to his body with elastic bands and prayer. Unsurprisingly, his passes now display all the zip of a Biggest Loser contestant on the third flight of stairs.

I’m not saying a roll of Mentos could provide better analysis than Phil Simms of CBS. I’m not saying it—however, I am typing it in a magazine and placing it on a long banner pulled by a biplane. Listen for yourself: When someone makes a great play, Simms will say: “Whoa, that’s a great play!” He is the perfect analyst for football viewers who can’t figure out how to face their television screen. (To be fair, that does account for roughly 40 per cent of Cleveland Browns fans.)

The play-by-play duties will be handled by Jim Nantz, whose affection for Manning is so firmly established that, well, prepare yourself for this: “And here’s The Sheriff once again not accidentally coming out to play in his street clothes. PEYTON MANNING: WHAT A PRO!”

If there’s a contentious play that goes to video review, turn up the volume no matter where you are: a party, a bar, the delivery room. That’s the only way to fully appreciate the Mike Carey Experience. Carey is a former referee whose entire job is to clarify rules and give insight into close calls. Except that every time—EVERY TIME—he further confuses the situation and gets the call wrong.

Mike: “Ghosts, a lot of the time. Once my ottoman winked at me.”

Jim: “I mean on the video review.”

Mike: “Clearly we see the receiver drop the puck through the hoop. By rule, that is a Yahtzee!”

It’s fun to watch for glimpses of celebrities. Five years ago, the Super Bowl cameras caught Cameron Diaz feeding popcorn to Alex Rodriguez, and not a week has gone by that I haven’t thought about that image. Was it a weird gesture of affection? Or is this how all famous people snack? We’ll have our answer if we come across Gwen Stefani flinging hushpuppies into Blake Shelton.

Anyway, be sure to pay attention when they cut to the luxury box of Carolina owner Jerry Richardson, a 79-year-old former player who amassed his fortune in restaurants and last altered his facial expression in 1993. 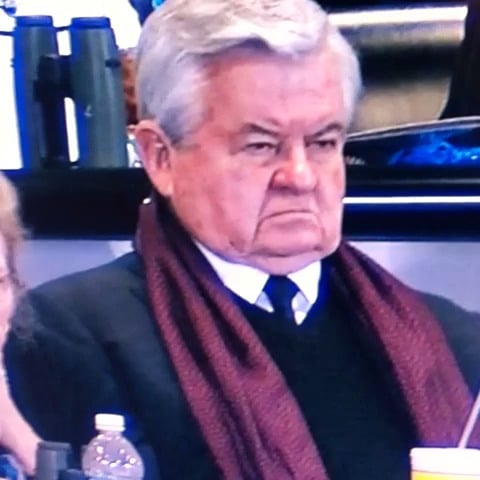 The Richardson Frown is an anatomical marvel, and wonderfully sinister. If you squint at Richardson’s suite, you may be able to make out James Bond in the background, about to be lowered into a pool of piranhas.

One year the NFL gave us Springsteen. Another time: Prince. This year? Sit back and enjoy the lukewarm sonic oatmeal of Coldplay—the favourite band of people who like self-help lyrics set to music you’d hear on a mutual-fund commercial. Right now, Pepsi.com is showing a behind-the-scenes video that claims a team of workers has exactly 7.5 minutes to erect the stage on which Coldplay will deliver its 12-minute performance. Singer Chris Martin said: “In an ideal world, we’d like to somehow honour the past, celebrate the present and look to the future.”

In an even more ideal world, it will take me 19.5 minutes to pee.