The hypermasculine spectacle of the Mayweather-McGregor fight

Opinion: The boxing match is reinforcing damaging ideas about race relations and men’s role in society 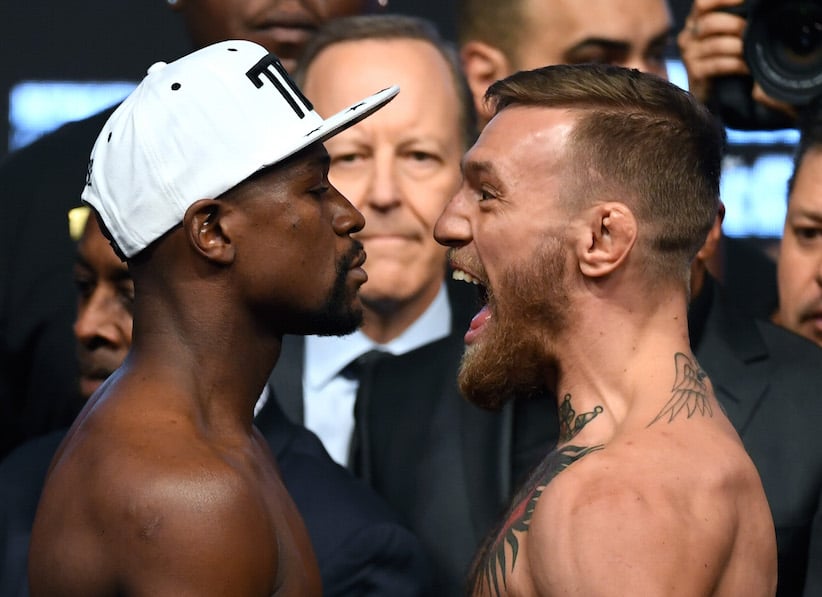 Regardless of what happens in the ring between Floyd Mayweather and Conor McGregor, the spectacle will be a success when measured by the stakes of boxing promotion. Whether it’s one of history’s most remarkable upsets or an absolute dud, it will be watched by millions around the world and it will be profitable, by a count of hundreds of millions of dollars. By that standard, the Mayweather-McGregor fight might be the most successful boxing event in history.

It is also a travesty.

Lacking any real sporting stakes, the hastily assembled circus needed as much hype as possible to matter — and it has relied on the most retrograde tropes to build its allure. A four-city press-conference tour leaned on undertones of racial conflict and outright misogyny. McGregor told his black opponent to “Dance for me, boy.” Mayweather hurled a homophobic slur at his opponent (though he later apologized for the remark). At each stop, the shtick was littered with overt sexism. The hypermasculine, racialized rhetoric helped build the hype around the must-see pay-per-view event.

Even in a time when professional leagues are working to combat the racism, homophobia and misogyny that have traditionally permeated the culture of sport, the regressive promotional approach to Mayweather-McGregor came as no surprise to Dr. Jeffery Sammons, an expert in African American history, culture and sports at New York University.

“I’m not shocked,” Sammons says. “These are masculine preserves, and they’ve been heavily inflected with race.”

For many, Sammons explains, the allure of boxing — and combat sports in general — is that it throws us back to a more aggressive, male-centric era where dominance was determined by strength in combat. The racialized and misogynistic tenor of the Mayweather-McGregor fight plays to a kind of hypermasculinity that has been challenged by modernity. “Boxing is freighted with so much meaning and symbolism that extends far beyond the ring,” says Sammons, who has written extensively about the role of boxing in American society.

MORE: Boxing saved him. Then he killed a man in the ring.

Racial tensions have played out in the ring throughout the history of boxing, going back to the days of Jack Johnson, the first African American to the hold the world heavyweight championship, and the call for a “great white hope” to take the title from him. Those tensions carried on through the decades in the theatre of what Sammons calls “war individualized.”

Wittingly or not, McGregor reinforced those ideas with his racially charged rhetoric. “McGregor is playing into all these racial stereotypes and fears and hatred. And he might not be a racist — he might be doing what his backers want him to do,” says Sammons. “But the fact of the matter is that this has unintended consequences … It’s dangerous. It doesn’t matter what your motive is, or what might be in your heart. You’re doing stuff that can cause a lot of damage.”

Boxing has always been a sport of the rough and tumble. It plays to the idea of people stuck on the lower economic rungs of society fighting their way to the top, while unapologetically maintaining their working-class edge. McGregor’s own rags-to-riches story is impressive. He has wide appeal in the same way that Jack Dempsey, the impoverished rail-rider turned world heavyweight champion, did a century ago. Mayweather also rose out of a difficult past, en route to becoming one the greatest boxers ever.

But impressive as both fighter’s careers have been on their own, this gimmicky collision has done nothing but reinforce dangerous and damaging ideas about race relations and men’s role in society.

“It’s something that shouldn’t exist in our day and age,” says Sammons. “I think it just shows how primitive and barbaric we can be.”