Senators fans hate their owner, the feeling appears to be mutual, and internal dysfunction keeps producing HR messes. How did it get this bad? 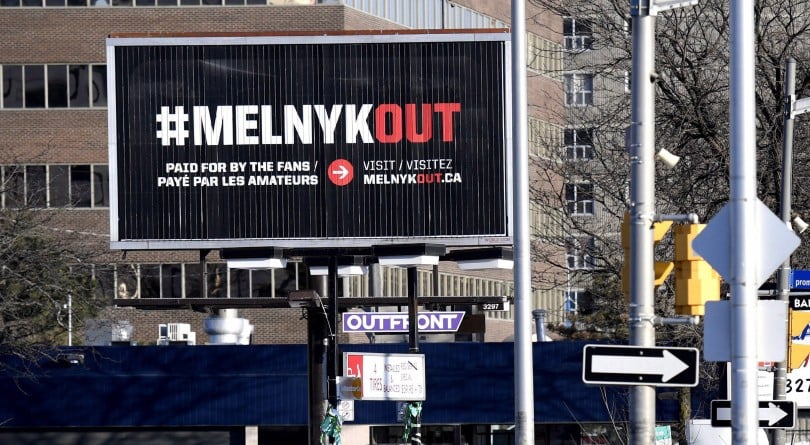 A billboard calling for Ottawa Senators owner Eugene Melnyk to sell the team is seen in Ottawa on Monday, March 19, 2018. (Justin Tang/CP)

The sports columnist Bill Simmons coined the term “the Tyson Zone” to describe the rare celebrity whose behaviour is so unhinged that there is nothing they could do anymore that would shock or surprise anyone. Mike Tyson, of course, was the original, and the president of the United States is currently the most prominent occupant of this rarified air.

But the Ottawa Senators hockey club, impressively, is nearing this territory as an organization. Recent events surrounding the NHL’s Senators are the narrative manifestation of that thing where you close your eyes, pinch the bridge of your nose and mutter a string of curses so foul and deformed by your own canned rage that they just emerge as a string of consonants: “Ffffffkkkkmmttrrrrgh.”

The roots of the acrimony between fans and the organization go back to 2013, when captain and supposed Senator-for-life Daniel Alfredsson was driven to sign with the Detroit Red Wings for the last year of his career because of contract dickering that should never have happened. Ottawa is a relatively young franchise and a small-market city, and it’s difficult to overstate what Alfie meant here, and how his departure destroyed trust in the organization and owner Eugene Melnyk, who was seen as responsible for the debacle.

READ MORE: The Canadian senator who ranted in the Senate about American hockey</strong

Still, in 2015, Sens fans literally saved Melnyk’s life. The owner was in end-stage liver failure, so the team launched a public campaign—complete with a news conference attended by the team doctor—to solicit potential donors who were willing to be tested. They received more than 1,000 calls, and within weeks, a successful candidate was located and Melnyk received a transplant. He vowed that he would find a way to fulfill his anonymous donor’s one wish: the Stanley Cup returning to Ottawa.

Hoo boy. Instead, here is what happened over the past year or so:

In November 2017, the team traded away one of their top forwards, Kyle Turris, and he said publicly that management wanted to keep him but Melnyk wouldn’t write the cheque. When a reporter tweeted general manager Pierre Dorion’s insistence that all hockey decisions were his and not Melnyk’s, Turris’s wife, Julie, replied, “lol.”

The following month, the Sens hosted the Montreal Canadiens in an outdoor game at Lansdowne Park to celebrate the league’s 100th anniversary. Melnyk felt that was an ideal moment to complain about low attendance, and how he’d “cut everything to the bone” with management, so the roster was next. “If it doesn’t look good here, it could look good somewhere else,” he said. Ottawa was 24th out of 31 teams in the league in average attendance for the 2017-18 season, but that’s fallen off precipitously; five years ago, the Sens were sixth overall. Forbes ranks the team 20th in its valuation of NHL franchises, worth an estimated $420 million when debt, revenue and operating income are considered (by comparison, the New York Rangers, in the No. 1 spot, are worth an estimated $1.5 billion, and the Arizona Coyotes are dead last at $300 million).

Threatening to move the team, amazingly, did not improve relations with fans. #MelnykOut became their viral hashtag rallying cry, and by March, a crowdfunding campaign had raised more than $10,000 to install four billboards around the city, demanding the owner sell the team.

In May, assistant GM Randy Lee was arrested and charged with harassment in Buffalo, N.Y., after a 19-year-old hotel shuttle bus driver accused him of unwanted sexual advances. Lee has pleaded not guilty, and the accusations have not been tested in court.

Then, in June, it emerged that captain Erik Karlsson’s wife, Melinda, had applied for a peace bond against Monika Caryk, fiancée of Sens forward Mike Hoffman, alleging a campaign of harassment stretching back to the previous fall. Earlier in the spring, the Karlssons had suffered the loss of their stillborn son, Axel, one month before his due date, and Melinda alleged in her complaint that Caryk had posted more than 1,000 harassing messages on social media, threatening her unborn child and her husband’s health.

Caryk and Hoffman have both vehemently denied being involved, but the toxicity of the dressing room was obvious, and within weeks, Hoffman was traded—at a steep crisis discount—to San Jose and then, two hours later, to the Florida Panthers.

In the meantime, starting goaltender Craig Anderson has reportedly requested a trade. It’s hard to imagine why, when he could continue to work in what appears to be a particularly dark late-season episode of The Office. And Alfredsson told a reporter in late May—apparently by accident, not realizing she was media—that he and Ottawa Mayor Jim Watson were in agreement that “we hope we get a new owner.”

Karlsson, the swift and flashy two-time Norris Trophy winner, meanwhile, has one year left on his contract and was given an offer sheet by the Sens, but they also granted permission for him to talk to other teams. As of press time, he is still a Senator, but given Melnyk’s legendarily tight budget, Karlsson leaving town appears to be a when, not an if, and recent history suggests the team will get hosed on the return for him.

So, to sum up Ottawa right now: the fans hate the owner; the owner appears to hate the fans right back; the team’s beloved former captain was driven out of town and now appears to also hate the owner; the team’s beloved current captain is on the verge of being driven out of town; the organization is either so dysfunctional or simply unlucky that hideous HR problems are blooming like bruises. Also, a bunch of Sens-branded baby onesies were recalled recently because they posed—I swear to God this is true—a choking hazard.

In hockey, as in life, you’d like to think there’s some sort of grand balance in the universe, some mechanism by which the cosmic hands tweaking the puppet strings will only wreak a certain amount of havoc in one spot before moving on. But being an Ottawa Senators fan these days suggests that in hockey, as in life, that is not even a little bit true.