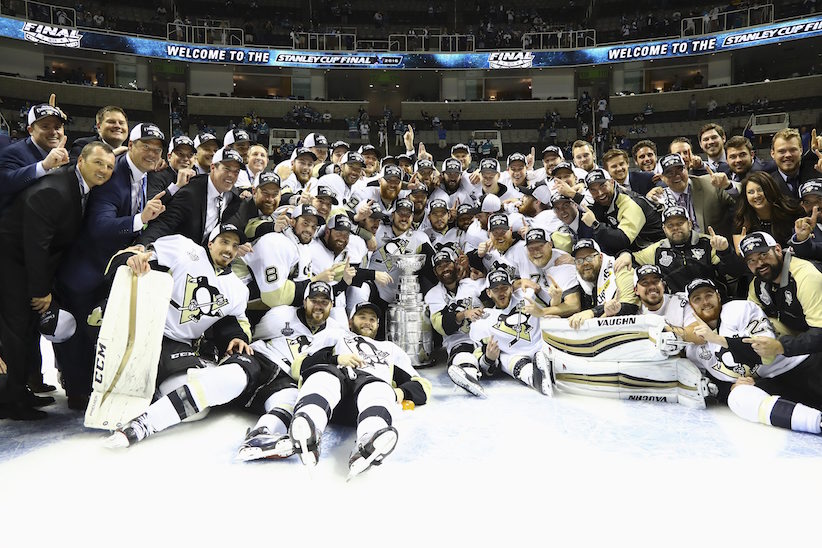 Pittsburgh Penguins players and coaches pose for photos with the Stanley Cup after Game 6 of the NHL hockey Stanley Cup Finals against the San Jose Sharks in San Jose, Calif., Sunday, June 12, 2016. The Penguins won 3-1 to win the series 4-2. (Bruce Bennett/Getty Images via AP, Pool)

Crosby and the Penguins beat the visiting San Jose Sharks 3-1 on Sunday night to win the Cup final in six games, setting off the familiar sight of an American team parading the iconic trophy around an American rink.

A Canadian team hasn’t won the Stanley Cup since the Montreal Canadiens beat the Los Angeles Kings in the 1993 final. This year, no team north of the border came close to ending that drought.

All seven Canadian teams failed to even qualify for the 2015-16 playoffs. The last time that happened was 1969-70, when the only Canadian teams in the league were Montreal and the Toronto Maple Leafs.

League commissioner Gary Bettman urged Canadians to tune in to the playoffs anyway, but the lack of Canadian content led to a dip in ratings for Rogers, which signed a 12-year, $5.2-billion deal for NHL rights in Canada in 2013. Audience levels fell below the million mark for many early-round playoff games.

The lack of interest was compounded in Toronto, where the NBA’s Raptors and baseball’s Blue Jays stole much of the NHL’s playoff buzz.

Ratings recovered for the final. Scott Moore, president of Sportsnet and NHL properties, told The Canadian Press that the first three games of the final series between the Penguins and Sharks drew between 1.7 and 2.2 million viewers. Still, that pales in comparison to last season’s first-round meeting between Montreal and the Ottawa Senators, which averaged 3.2 million viewers per game.

If there was a silver lining for Canadians in these playoffs, it was the play of Crosby who was awarded the Conn Smythe Trophy as the post-season’s most valuable player. The Penguins star is expected to be a leader for Canada at this year’s World Cup of Hockey in Toronto.