The ringmaker behind the Toronto Raptors championship bling

What do you put on a diamond-encrusted bauble to make an NBA star smile? More diamonds, of course. 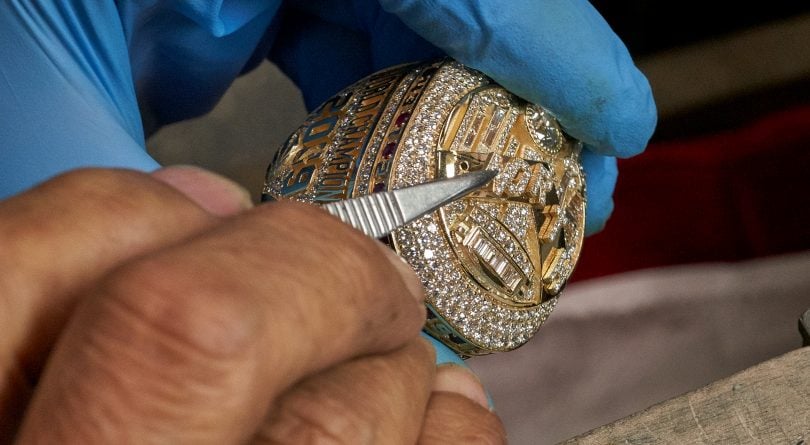 The Raptors’ ring is the largest NBA championship ring ever made, with more than 650 Canadian-mined diamonds totalling 14 carats (Photograph by Geoff Robins)

When Kyle Lowry ﬁrst picked up a prototype for what would become the Toronto Raptors NBA championship ring, he put it on his ﬁnger, stared at all the diamonds around Toronto’s skyline with “We the North” written across the face, and let out an audible “holy f—.”

Then he walked around the room with it on, and even FaceTimed a teammate to show off the jewellery. But this wasn’t the ﬁnal product. At the time, it was one of three models submitted by suppliers bidding to become ringmakers to the 2019 NBA champions.

Given Lowry’s reaction, however, “we had a good feeling,” says Arthur Horton, vice-president of sales at Baron Championship Rings, the family-owned company in tiny Tecumseh, Ont., that won the contract.

READ MORE: Journey to glory: The story of the 2019 Toronto Raptors

Lowry later offered suggestions, such as: let’s add even more diamonds. “We the North” looked cool, the point guard agreed, but how about just keeping the “North” chevron across the middle—no need for “We the”—and ﬁll the open space with diamonds? The 14-karat, yellow-gold sides of the ring? More diamonds there, too.

“Kyle said he wanted it glassed out,” says Mike Zinyk, the ringmaker’s production manager. “He said to ﬁll it with as many stones as you can.”

On opening night of the Toronto Raptors 2019-20 season, Baron unveiled its ﬁnal product to the reigning champs: more than 650 Canadian-mined diamonds, totalling 14 carats; 16 rubies next to the jersey numbers of the 16 Raptors on last year’s roster; six diamonds on top of a golden Scotiabank Arena to represent the “6ix”; and a seven-millimetre diamond as the centrepiece to represent the Larry O’Brien Trophy. It is the largest NBA championship ring ever made.

Purists might call it gaudy, but the ring represents a team—and a country—that had been on a 25-year quest for an NBA championship. And for Baron Championship Rings, based in an unassuming building in a quiet town near the Detroit-Windsor border, the ring tells a story of its own quest for supremacy.

Back when Baron Insignias Ltd. was founded in 1984, the company was trying to get in on the market for school grad rings. “I went after 40 schools and I got only one: Tilbury District High School,” remembers the company’s founder, Richard Baron. “The next year, I got ﬁve schools.”

As his portfolio grew, Baron would learn about a football coach here or hockey coach there who wanted a ring to commemorate a high school championship. He’d meet up with them, pencil in hand, and draw designs on napkins.

The family found the design work exhilarating, and Baron started to make rings for peewee and bantam hockey teams before getting a contract to make championship team rings for the Ontario Minor Hockey Association; that, in turn, opened up the doors to B.C. football, and then the massive Greater Toronto Hockey League. The company rebranded as Baron Championship Rings and some big breaks followed: world title rings for Hockey Canada’s under-17 team and a toehold in the lucrative market of U.S. college sports rings.

They kept expanding until Baron completed a basketball sweep in 2016—making rings for the U.S. men’s and women’s Olympic gold medal teams, the WNBA champion Los Angeles Sparks, and the NBA champion Cleveland Cavaliers. “This really put us on the map,” says Baron vice-president Drina Baron-Zinyk, who with her brother Peter Kanis, bought the company from their dad that year. “We were doing LeBron James’s ring.”

Then the championships started to rain for Toronto—and for Baron’s: NBA D-League team Raptors 905, soccer’s Toronto FC, the Toronto Marlies of the American Hockey League. (The company lost out, however, on a bid to make rings for the Grey Cup-winning Toronto Argonauts.)

On the night the Raptors clinched their ﬁrst NBA title, Baron-Zinyk emailed to congratulate Judy Tanenbaum—a part owner of the Raptors along with her husband Larry Tanenbaum, the chairman of Maple Leaf Sports and Entertainment. After a friendly exchange, Baron-Zinyk told Judy that, when the team was ready, her company was working on potential ring designs they’d love to share.

Days before the Raptors’ home opener, staff in the production room focused on placing the ﬁnal few diamonds on 16 rings, one for each player on the title-winning roster—plus one more ring for “The Boy,”  better known as the rapper and “team ambassador,” Drake.

The company’s humble roots are visible all over its headquarters, including a black-and-white picture of little Drina and Peter standing outside the “Baron Mobile” bus their dad used to drive to schools, decades ago, to provide ring cleanings. Today, the business has four high-end 3D printers creating wax models. But for all the technological advances, the company’s founder won’t let his kids get rid of his old tools and ring dies from yesteryear. “We get the odd person who will call about replacing a championship ring, so we can’t get rid of the dies,” explains Richard Baron, before adding his customary, old-school salesman pitch: “And we got a lifetime guarantee on these rings.”

See the Raptors ring get glassed out below: 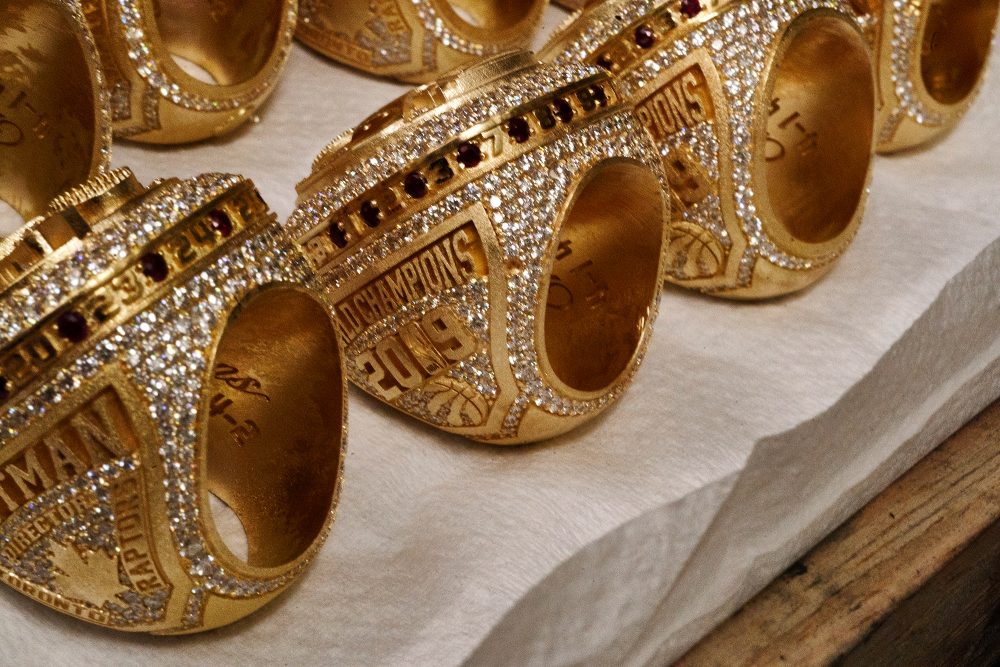 This article appears in print in the December 2019 issue of Maclean’s magazine with the headline, “Bling on the champions.” Subscribe to the monthly print magazine here.