The celebration was 'a clear reminder,' said one, 'of what the city can be on days or years when we are not winning championships' 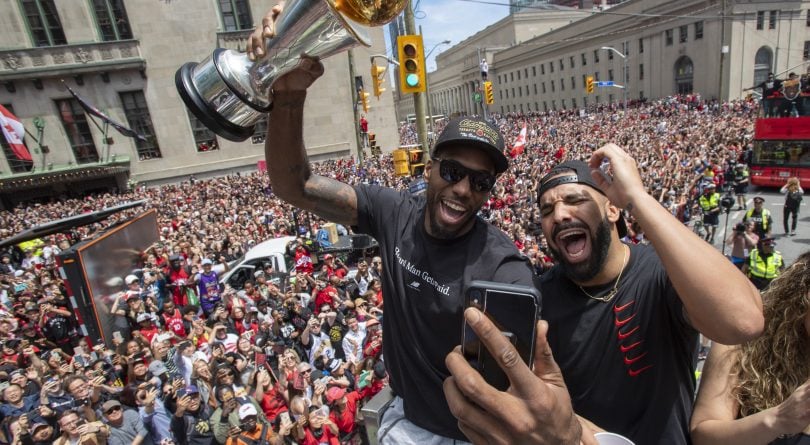 Leonard holds his MVP trophy with Drake during the parade in Toronto on Monday. (Frank Gunn/CP)

In the shadow of the CN Tower, as the crowd roared and the camera phones came out, a big red double-decker moved slowly around the corner to the deafening and distinct Toronto Raptors-fans’ battle cry, “We the North.” On board, veteran leader Kyle Lowry wore a vintage jersey of Damon Stoudamire as a tribute to his mentor and the franchise’s first-ever draft pick. On the ground, fans allowed themselves to savour the moment with the sort of elation that, for many, had been decades in the making.

“To be honest, I never thought I would see the Raptors win the NBA championship, or even make it to the finals. I saw them lose to teams like the Wizards and the Nets. We never thought we’d win anything,” said Carl Hart, a 42-year-old construction worker who had come to watch the victory parade from Burlington, Ont., with his wife, his son and his three-year-old daughter. “I never thought I’d see anything like this in my lifetime. But this is much bigger than this city; this is about the world. Because this team is practically the United Nations.”

This season, the Raptors played dazzling, feisty, resilient basketball. On defence, led by the world’s best two-way player, Kawhi Leonard, they no longer gifted games to opposing teams under pressure. On offence, driven by committee, they were unpredictable and fast. The Raptors appeared to have discovered new levels of confidence and fortitude, which translated to one of the most remarkable playoff runs in NBA history.

For some fans, that means a restoration of pride. Sam Maraj, 36, had been watching the Raptors play since he was a little boy and was “made fun of in high school” by his classmates, who at the time were cheering for the New York Knicks. The team has started to do things on court it could never do before, he said, adding: “This is our time.”

Alex Munro, a 31-year-old postgrad student, admitted to being “absolutely shocked,” and said the feeling is still sinking in. The victory over the dynastic Warriors, he said, brings “a massive feeling of vindication because although we’ve won lots of games in recent years, we never won the league’s respect. Now, as champions, we belong to that special club. So, this means we’ve arrived.”

Forecasts of two million people attending the victory parade appear to have been close to the mark. (The event was marred by a shooting near City Hall that left four injured; their injuries were not life-threatening, police said, and three people were under arrest.)

As they passed the ecstatic crowds lining the streets of Toronto, players including Marc Gasol, Pascal Siakam, and Fred VanVleet jumped up and down on top of the bus. Gasol led the crowd in victory chants, spraying fans with champagne as they jockeyed to get a clear glimpse of the NBA championship trophy. Some hung off trees and street lights; others waved “Please Stay” signs—presumably meant for potential free agent Leonard. “We The North” flags flew from balconies as the parade approached Nathan Phillips Square.

Prime Minister Justin Trudeau was among the attendees, embracing Masai Ujiri with a smile. Ontario Premier Doug Ford’s reception was icy, as he was greeted with a chorus of boos when he was announced to the crowd. Toronto Mayor John Tory presented Leonard and the Raptors with the key to the city and unveiled Raptors Way as a ceremonial street.

RELATED: With the Raptors’ win, Toronto leaves the agony behind

The last time Toronto held a sports celebration of this magnitude was after the Blue Jays won the World Series in 1993.

Yet Leonard’s future remained the one big question looming over the historic day. The finals MVP heard the fans, who were chanting along the parade route “One more year,” and responded with a smile. Kyle Lowry replied to the crowd, “Five more years!”

Speaking to the energized crowd through a microphone in Nathan Phillips Square, Masai Ujiri, who will be primarily responsible for convincing Leonard to come back, thanked the fans: “I want to thank the people of Canada and all over the world who supported the Toronto Raptors. I had no doubt that we could win in Toronto and we will win some more in Toronto.”

“There is a lot of good energy flowing through the city right now. People can worry about if Kawhi will come back or just enjoy this moment,” David Azari, 26, said. “I think we have, as Fred VanVleet put it, done what we could do. Toronto is a hard-working city; Kawhi is a hard-working player; I believe he respects the vibe of this city. I might have bias obviously but I’m confident. We are champions, man.”

Like many fans, Azari envisioned deeper meaning for Toronto arising from this defining moment, which he described as  “a clear reminder of what this city can be,” he says, “what it should try to be on days or years when we are not winning championships.”

This story has been updated to accord with police reports on the number of injuries from the shooting.