'This is why athletes kneel': CFL players and alumni speak out

Some CFL athletes, both past and present, explain why they stand with Colin Kaepernick and National Football League players who take a knee 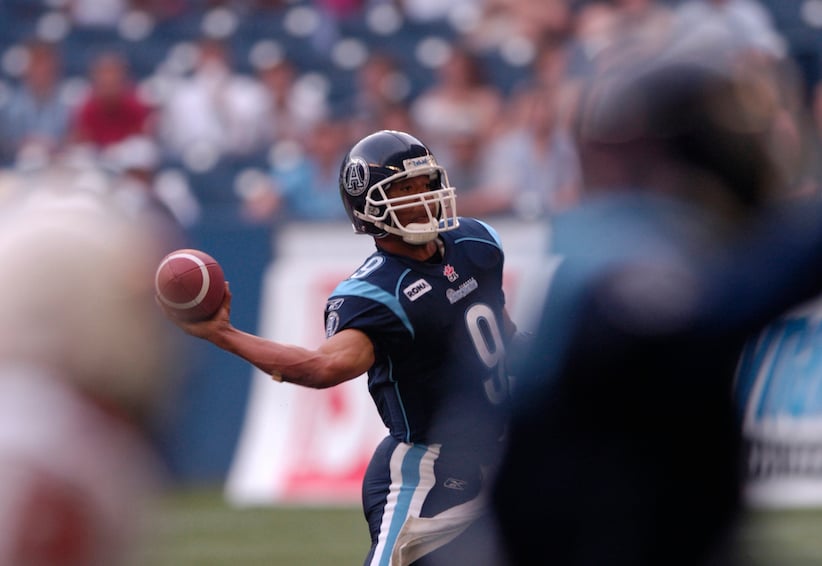 Toronto Argonauts QB Damon Allen unloads downfield during CFL action at the 2005 home opener between Toronto and the BC Lions at the Rogers Centre. (Rick Madonik/Toronto Star)

“You don’t have a right to tell an athlete what to think, or what to say,” the retired quarterback tells me over the phone. “We’re not just football players, we’re all of these other things. We’re fathers. We’re taxpayers. We’re citizens. But more so than that, we’re human beings.” I’m on the phone with Damon Allen, the four-time Grey Cup-winning quarterback who retired with the Toronto Argonauts in 2007. Allen’s voice, honed for decades for sound bites on broadcast television, carries a tinge of indignation.

As the National Football League limps into the tenth week of its 2017 season, the league has been dogged by controversy over players who kneel, as well as the continued blackballing of former 49ers quarterback Colin Kaepernick. Allen, a legend in the CFL for his versatility in passing and rushing, believes there’s a double standard at play. “We all participate in politics, and people want to try and dictate to players what type we’re allowed to participate in?”

The people Allen is referring to are everyone from commentators, advertisers, and even team owners, whose recent vocal opposition to the protest has further enmeshed the league in negative media attention. Former Los Angeles Dodgers broadcaster Vin Scully declared, “I will never watch another NFL game” at a private speaking event, due to his disappointment over perceived disrespect of the military. John Schnatter, the owner of Papa John’s Pizza, blamed the chain’s lagging sales on player protests during the national anthem, and that “this should have been nipped in the bud a year and a half ago.” Houston Texans owner Bob McNair let slip the words “We can’t let the inmates run the asylum” at an owners meeting, though he apologized, and clarified that his remarks were meant to describe the relationship between the owners and the NFL head office.

But what rankles Allen the most are people who misunderstand the purpose of the protest—that is, the misguided belief that players are kneeling in protest of the national anthem, and of the American flag—and choose to remain ignorant about what issues the players are kneeling for. He believes the strain between NFL players, owners, and outside commentators is indicative of broader racialized tensions in America, and along with other current and former football players I spoke with, says about time the league address the issue head-on. “People always say ‘there’s a better way to go about it,’ but tell me a better, more peaceful way to shed light [on injustice] than kneeling.”

“If it was any other business where people make millions, no one tries to tell them to shut up,” says Alouettes defensive back Tevaughn Campbell. “If I was working at a Fortune 500 company, I’m saying what I want to say. I don’t care who pays me. But a football player speaks up, and they’re penalized for it.” As a Toronto-born player, Campbell identifies strongly with the sentiment that the Black community in America, and NFL players themselves, have a personal stake. “It’s not like any of the players are fighting for anything except equality, and equal rights. For people to s—t on that, or for businesses to blame his losses on them, that’s just a scapegoat.”

“Some of these people don’t know what it is you have to go through, in order to be an NFL player, or what it means to be a Black person in America,” said James Hargrave III, a former linebacker for the Detroit Lions and the Hamilton Tiger-Cats. Hargrave was rudely introduced to the difficult reality of racism in sports while still in his teens; during a contentious season at St. Joseph’s High School in Atlantic City, N.J., students from an opposing school once spray-painted his school’s football field with racial slurs. “My school was majority white, and there were maybe six or seven African-Americans in the whole school,” he said. “It was a message for me.”

When I asked if he would take part in the protests if he were still playing, Hargrave answered without hesitation: “No doubt. I went through it personally. When I see Kaep take a knee for injustice, I’d have to take a knee too.” 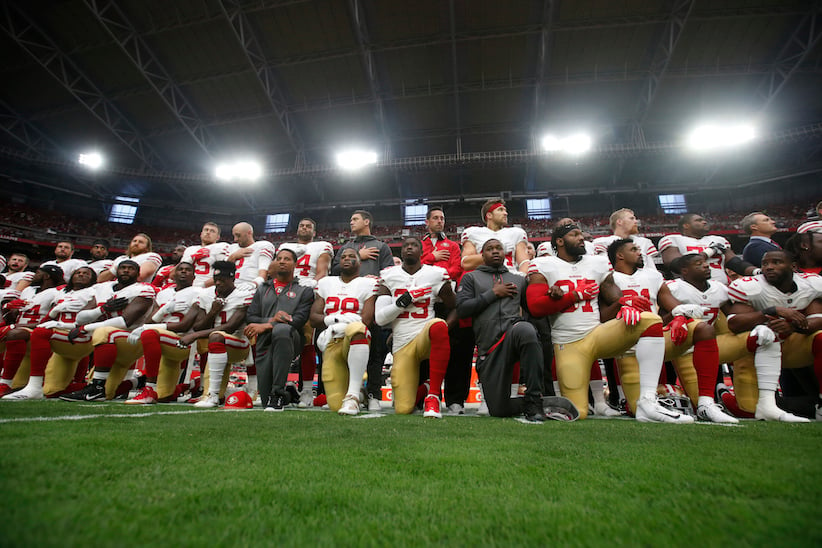 While players often wish to speak up on issues that affect their communities, if not themselves personally, many remain silent out of fear of serious financial repercussions. In fact, ESPN anchor Jemele Hill said as much in the series of tweets that resulted in her two-week suspension. Marcus Adams, former defensive tackle for the Saskatchewan Roughriders, put it bluntly: “Some of these athletes grew up broke, poor, struggling. The owners know not many people on the team will be like ‘Man, whatever, just cut me.’ They need the paycheque. You bought your mama’s house, you take care of your brothers and sisters, and you have your own family.”

Adams currently works as a talent scout for the Montreal Alouettes, as well as a correctional officer for the province of Saskatchewan, and believes that many sports franchises—including the Roughriders—often perpetuate the same culture of silence, out of fear of alienating fans. After the 2008 U.S. election, in which Barack Obama was elected the nation’s first Black President, Adams says the Roughriders players were paid an unusual visit by the team’s media relations staff. “We had people in the media relations department tell us what we could and couldn’t talk about…We got so hype when Obama was in the office, but they would say, ‘Keep this about the team we’re about to play,’ and that ‘we’re a community-owned team.’ They didn’t want to piss off the fans.” (When asked about Adams’s statement, a Roughriders spokesperson said that most of the current team’s corporate staff were not around in 2008, and declined to comment.)

When I asked Adams about the current state of tensions in the NFL, given that race has been a longstanding issue of contention in America, he pointed to the election of Donald Trump, specifically the President’s call for the NFL to fire every “son of a b—ch” who kneels. “When Trump got into office, white supremacists got more confident, because they have one of their own in the White House,” Adams says. “That’s why you see these rallies happening so often. You didn’t see that very much, before. Racism never really left, but you see so much more of it. This is why athletes kneel.”

On the matter of how the NFL might put an end to the protests, former Roughriders defensive back Tamon George made it clear that the league needed to show the type of compassion that other leagues have extended to their athletes. “There are soccer leagues that have had issues with racism, and have said, ‘This is important enough to us to create a campaign for it.’ Outside the stadiums, you see these big ‘end racism’ banners, and have even created advertising campaigns. But this doesn’t seem to be important to the NFL.”

For his part, George isn’t watching the current season, and may never watch another game until the league does more to support its players, 70 per cent of which are Black. “The NFL has had ample opportunities to say that it cares. But perhaps our values perhaps don’t align, so I’m not going to watch this game that doesn’t support my right to equality.”

There are seven weeks left to go in the season before the playoffs. Lower-than-usual viewership numbers, in addition to the plague of injured high-profile quarterbacks, have already marked 2017 as a dismal one for the NFL. But this season could also  mark a turning point for both the league and its athletes.

As much as fans and owners would like to believe the ugliness of the season will blow over, the majority of NFL players are still Black people in America when they leave behind their pads and jerseys between games. They still exist as Black people in a country that applies justice unequally to their kin, and voted to hand the reins of power to a white supremacist. And that, Allen believes, is why it’s important for the current generation of players to keep up the struggle.

“The new generation of athletes needs to understand that politics affect them as well. As athletes, we have to be much more well-rounded, and understand what our responsibilities are. You can represent yourself properly and do things that are appropriate, but you have to make a statement. You can’t not be involved in politics. It’s everywhere.

“They’re never going to stop, so we might as well speak our truth.”