This Quebec politician dropped the gloves on the ice. Now he wants fighting banned.

Quebec's National Assembly unanimously approved a bill to end hockey fights sponsored by Enrico Ciccone, a former NHL player who racked up 1,469 penalty minutes and 28 points. The next move is up to the government. 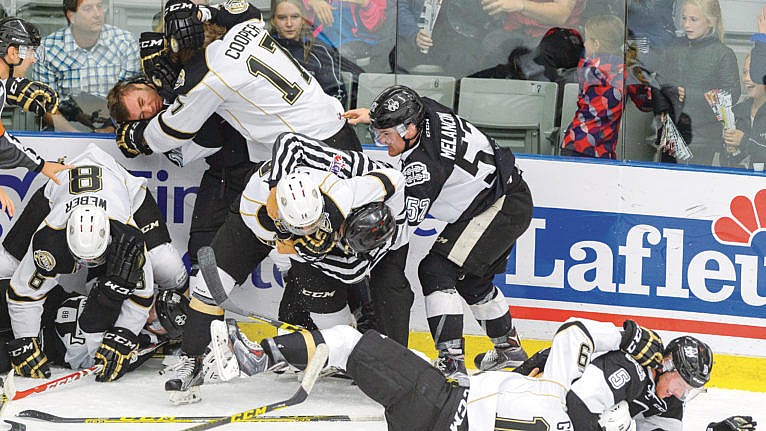 To hear Enrico Ciccone describe it, retiring from the NHL is a bit like shaking yourself awake and looking around to find you’re in your own bedroom and not whatever dreamscape you thought you were in.

“It takes about two years, when you retire, to realize that what you’ve been living for the last 10 years, it’s not reality,” he says. “After you get back down to earth, then you realize, ‘Oh my god, really? Is that what was going on? Did I really do this? Was I speaking like that and did I act that way?’ ”

Over 374 NHL games as a journeyman with teams including the Chicago Blackhawks and Tampa Bay Lightning, Ciccone racked up 1,469 penalty minutes and 28 points, before playing his last game wearing a Montreal Canadiens sweater during the 2000-2001 season. “If you would have asked me that question when I played, should we take fighting away from the game, I would have said, ‘No way, that’s the way it is, and that’s the way we play and we’re tough and we have character,’ ” he says.

But Ciccone is far from the game now and has discarded that Don Cherry manifesto entirely. In 2018, after a long post-playing career as a hockey broadcaster, he was elected as a Liberal MNA representing the Marquette riding in his hometown of Montreal, and he is now attempting to advance a private member’s bill through the National Assembly that would ban fighting in youth hockey.

READ MORE: Hockey’s chance to reckon with its culture of abuse

It is already effectively outlawed in all but the Quebec Major Junior Hockey League (QMJHL), which is why that league is Ciccone’s target. “It is ridiculous, and it’s pathetic that a legislator has to write a bill to get that to stop here in Quebec in 2020,” he says. “That’s a last resort.”

The QMJHL points to a reduction in fighting as a result of increased penalties enacted this season and suggests it will take further steps, but has so far resisted an outright ban. Ciccone, in contrast, points out that the provincial authority that licenses events such as boxing and UFC will not permit events where adults fight with their bare fists. “We accept bare-hand fighting in hockey with 15-, 16-, 17-year-olds. What the hell is going on here?” he says. “I know it’s tough to change traditions—that I know, believe me. We’re talking about hockey here.”

But he says the feedback about his bill has been vastly positive, and any charges of hypocrisy over the idea that he’s a former goon now looking to end other people’s fisticuffs roll right off. Rather, Ciccone argues, he is the perfect person to bring this bill forward because he knows the personal cost of on-ice punch-ups. “The funny thing about it is that every time the people who make decisions, who take care, who vote for it—they never got punched in the face,” Ciccone says. “They never got a concussion probably, they don’t know how it feels.”

He has former teammates who have committed suicide and others who need alarms on their phones to remind them to pick up their kids from school, or their wives stick Post-its to the thermostat to remind them not to change the temperature. Ciccone can remember being just 30 years old and unable to give his toddler son a horsey ride on the floor because of his damaged knees, but so far he hasn’t experienced major cognitive issues from the half-dozen concussions he figures he sustained as a player. “But I live with the anxiety that maybe one morning I’ll get up and I’ll start getting some effects,” he says. “Sometimes I forget something very easy, or a name, and I’m always telling myself, ‘Oh my god, is that a part of what happened in the past?’ ”

RELATED: Black hockey players on loving a sport that doesn’t love them back

The vast majority of kids who play junior hockey will never make it to the NHL, he points out, so if they run into trouble one day, they won’t have access to the alumni support services he and other former pros do. And while Ciccone is targeting youth hockey with this bill, he believes it’s inevitable that fighting in hockey will eventually become extinct; we simply can’t keep looking away forever, he argues. “I think it should have been there today, with everything that we know now.”

When his bill was introduced in the National Assembly on Oct. 21, it received unanimous support, but it’s now up to Isabelle Charest, the junior minister responsible for sport, to decide whether to proceed. Private member’s bills are long shots, but Ciccone says he would be perfectly happy to see his proposal made redundant before it ever passes into law. “If in two or three months, they make a decision, they take a vote, and they ban fighting in the Quebec Major Junior Hockey League,” he says, “I will take my bill and gladly throw it in the garbage.”

This article appears in print in the December 2020 issue of Maclean’s magazine with the headline, “Stop fighting, or else.” Subscribe to the monthly print magazine here.