Toronto might have a wee bit of a Kawhi Leonard problem

Yes, he led the Raptors to their first NBA title. But tracking his flight and car ride and standing outside a hotel where he may or may not be meeting? Yikes, Hogtown. 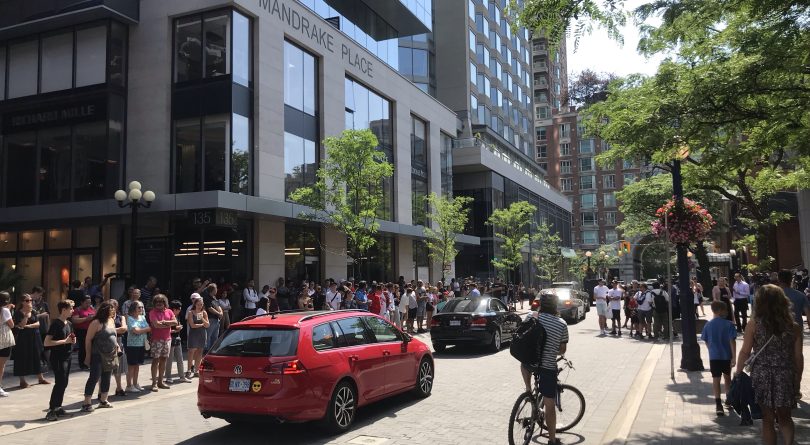 As the basketball world held its collective breath on Wednesday for Kawhi Leonard to announce his next destination, all eyes turned to a hotel in downtown Toronto called the Hazelton. A lot of those eyes were looking at it up close—in real life.

Such was the fever pitch of the city as speculation mounted that maybe, just maybe, the NBA superstar and finals MVP was poised to re-sign with the team he’d just led to a title. The hashtag #KawhiWatch took off on Twitter.

This is the scene outside The Hazelton Hotel in Toronto. Crowds are gathering in hopes of catching a glimpse of Kawhi Leonard. Video by @ArezaNaraghi #KawhiWatch pic.twitter.com/FrJhEe0Dxy

At least one of the city’s TV stations gave live coverage of the MLSE private jet landing in Toronto, with speculation that Leonard was on it. The plane reportedly arrived from Los Angeles International Airport, and it’s now believed that Kawhi was indeed on board.

For everyone on #KawhiWatch… Here are the passengers getting off the MLSE plane that landed in Toronto Wednesday afternoon. pic.twitter.com/fOqW67IsCA

The cameras and cellphones (including ours here at Maclean’s) then followed a mini-motorcade of two black SUVs as they made their way through city streets in the late afternoon.

Super weird that everyone I know is transfixed by two black SUVs winding their way through downtown Toronto, but here we are! A live shot from Rogers HQ! pic.twitter.com/825zteND7C

Shortly after, a growing crowd of Raptors fans gathered outside Yorkville’s Hazelton Hotel, where Leonard was thought to be meeting with Raptors president Masai Ujiri and general manager Bobby Webster.

“I’m just here to show my appreciation for what he has done for the city,” says Alison Clark, one of the onlookers standing in the afternoon heat. “I know he’s very private, but with delivering the Raptors their first championship, I’m sure he understands the excitement.”

The Raptors were keeping the talks under close wraps, as Leonard’s camp had evidently insisted.

But if the reaction to his mere presence in the city is anything to go by, the dramatic arrival might have been the easy part. Unless they get his autograph onto a contract, these people might not let him leave town.