Wayne Gretzky on the love of his life

A rare sit-down with Wayne Gretzky who talks about what it takes to win a Stanley Cup, how NHL players have changed, and why he only ever wore used skates 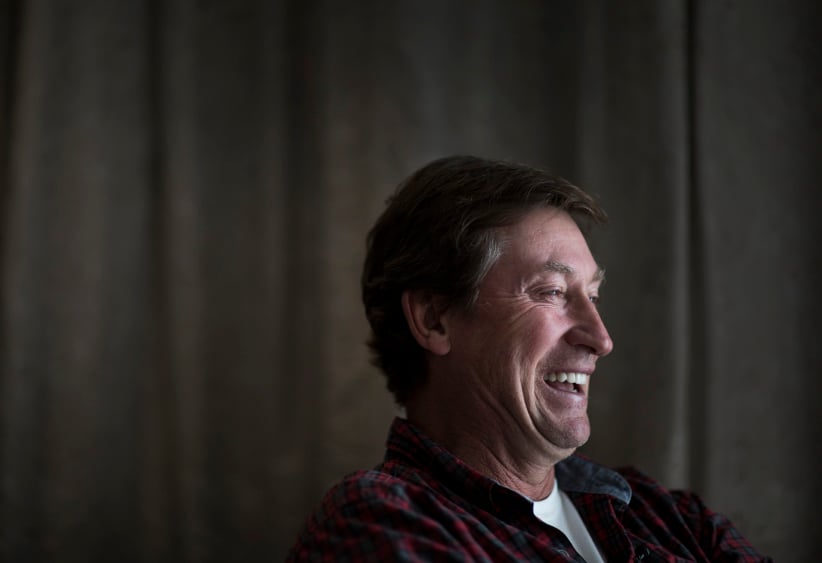 This article was originally published on Oct. 16, 2016

The Great One has done—and seen—it all. The NHL’s all-time leading scorer, nine-time MVP, winner of four Stanley Cups, is still the holder of 60 league records, 18 years after his retirement. He represented Canada on the world stage, coached in Phoenix, and built the men’s team that ended our Olympic gold medal drought in 2002. In 2016, he became an author with 99: Stories of the Game.

Q: What made you want to do a book of other people’s hockey stories as well as your own?

A: I grew up such a fan. It was my life. Everything I did was hockey related and everything I have is because of hockey and the NHL. So I really wanted to write a book on the tradition and history of the league, where kids can pick it up and read it and learn things and say, “Geez, I didn’t know that. That’s pretty cool.”

Q: You write about how hockey players remember the cheap shots and dirty hits forever. Is it the same thing for the goals and the great plays?

A: I think so. When people come up to me and say, “I was at your Game 7 in the playoffs in Toronto,” or, “I saw your first goal in the NHL,” that triggers memories. But I don’t sit around my kitchen table and tell my kids, “You know, one year I got 92 goals.”

Q: But you played almost 1,500 games and scored more than 2,800 points. Do you have that gift of recall, or do they all run together?

A: Oh yeah, I have recall. I don’t know why or how. I had a guy once who said he played against me in novice [league, for kids under nine], for the Detroit Lasers. And I said, “Oh yeah, we beat you in the tournament, 8-1 and I think I scored seven goals, and the goalie was left-handed.” And he was, “Oh my God. I was the goalie!” I can remember hockey. It was my life, my passion. It’s what I love the most.

Q: Was memory something you were able to use to your advantage?

A: Yes. The game is played out of instinct, but everyone on the ice has habits—good and bad. So the key to the game is to exploit the bad habits of your opponent.

Q: In the book, you describe the old-school, Original Six mentality when you started out, where you didn’t socialize with your opponents, ever. Today, the guys are all friends. Has that taken something out of the game?

A: Absolutely not. Competitive spirit is still at a premium. The more you win, the better you play, the more money you make, so they all have that in mind. We played in an era where you were taught to hate your opponent. But life changes. I raise my kids differently than my mom and dad raised their kids.

Q: People say the Stanley Cup is the hardest trophy to win in all of sports. What kind of sacrifice is required?

A: It’s really hard. And it’s harder today because of the salary cap. It starts in September at training camp—getting every guy on the same page, being as mentally and physically as focused as you can be. Then in April and May, you basically spend eight weeks practising, watching video and playing games. That’s your life. Your friends, family, and kids have to understand that’s your priority. It’s the only way you can be successful.

Q: You write about that first Cup for the Oilers in 1984, beating the Islanders the year after they beat you. There was joy and pride, but also something close to relief. Is the mental grind tougher than the physical one?

A: It’s easier to lose than to win. We watched the Islanders beat us and learned what it took and carried it with us from day one of training camp. Then in Game 5, we were winning 5-0 after two periods, and we were all in the locker room going, “Oh my God, this is something we’ve thought about our whole lives—we were going to lift the Stanley Cup!” We were so excited. We got back out there for the third and the Islanders scored twice, in like 30 seconds. And we were, “Oh, no, we’re in trouble.” But ultimately we won. When you lift that Stanley Cup the first time it’s so incredible, I can’t even describe it.

A: And they don’t have to connect through Minnesota or Saskatoon! It’s changed. It’s completely different. But Gordie Howe and Bobby Hull and Jean Béliveau probably looked at us in the ’80s and said, “These guys are soft. We used to take the train.” The last year I was playing, I asked the stick boy to get me a Diet Coke and he said, “Really?” But I always had one on the bench because that’s what I did in 1979 when there wasn’t Gatorade. If you needed energy you went and got a Snickers or a Kit Kat. Nobody knew any better.

Q: You write about your skates—how you’d send them to a friend to break them in. Did you play in used skates for your whole career?

A: Pretty much. I wasn’t a great skater and I needed my skates to be perfect—really tight around the ankles. But I couldn’t break in new ones because my feet would hurt so much. I wore a size 9 shoe and a 6.5 skate—my foot was really crunched. My best friend had a hockey scholarship at Ohio State, so I would get a couple of pairs at the beginning of the season and send them down to him. They practised two hours a day. He’d skate in them for three weeks then ship them back.

Q: There are lots of stories in the book about tough guys, from Eddie Shore on. But you think fighting is on the way out. Will you miss it?

A: I think people who are historians will miss it. But will it change our game? Not really. It’s really been taken out already. Kids don’t fight in minor hockey anymore. There’s very few fights in junior and college hockey. So growing up, all these guys are not fighting. I can’t remember the last time I went to a game and there was a fight. I think they fight more in baseball now than they do in hockey.

Q: You scored more than 200 points four times, and got 196 another year. Patrick Kane won the scoring title with 106 points last year. Jamie Benn took it with 87 points in 2014. Doesn’t that drive you nuts?

A: No. When I played in a 21-team league, there were six or seven goalies who were just average, and the equipment and pads were smaller. I came in the right era. I played for the right team. It was all speed, and creativity and imagination.

Q: Is there anything you’d like to see the league do to try and bring back offense?

A: If we’re going to change the game it has to start at eight, nine and 10 years old. When we were that age we’d go to the pond or backyard rink and throw a puck on the ice and play five on five, or seven on seven. You get this creativity and this imagination that comes from within, just having fun on the pond. Now kids are so focused on team play, and the coaches are so focused on positioning. You can’t change it at the NHL level.

Q: There’s a passage about Rocket Richard, where you talk about how the rink was a sanctuary for him; a place where his troubles went away. Was it the same for you?

A: Oh, it was my favourite part of my life. As my time went on, I started going to the arena at two o’clock or three o’clock. Just to sit around and talk to the trainers and have a cup of coffee and think. Nobody could get to me. Nobody could call me, nobody could ask me for something. The arena was heaven. It was where I wanted to be all the time.

Q: Was that part of the attraction of going back and becoming the Coyotes’ coach?

A: Hockey is my life. I love every minute of it. I love everything about it. So when I was offered that opportunity, I was like, okay.

Q: It wasn’t an easy transition.

A: It’s hard. As a player, you have one responsibility, to focus yourself and be ready for the game. As a coach, your responsibility is to get 20 guys ready and have them all on the same page. If you can’t get every guy ready every night, you’re going to struggle.

Q: You had your own highs and lows at the Olympics. You write about that shootout loss to the Czechs at Nagano in 1998, where you were nailed to the bench. Is that the defeat that sticks with you the most?

A: Yeah. We were sailing through the tournament. Nobody came close to beating us. Then we got into that game. We played exceptionally well, but we couldn’t score on [Dominik]Hasek and we tied 1-1. The amazing thing was that most of us didn’t know whether we went to overtime or what. It was a 10-minute overtime and then a shootout. I just think we all got caught flat-footed. It wasn’t any one person’s fault. We weren’t prepared.

Q: Did you see anything in the World Cup that convinces you it can replace the Olympics?

Q: In your early days, you used to sit with Béliveau or Hull or Howe and hear their stories. Now it’s you holding court with the young stars. What story do you like to tell them?

A: Lifting the Stanley Cup for the first time. There’s nothing like it. It’s the greatest story. In my era, they used to say you couldn’t be a superstar without winning one. I remember thinking when I lifted it: “Now they can’t say that about me.”