Why 2017 will be hockey year in Canada

In 2017, the NHL will turn 100, and turn its focus to hockey lore, outdoor games—and even a brand new team 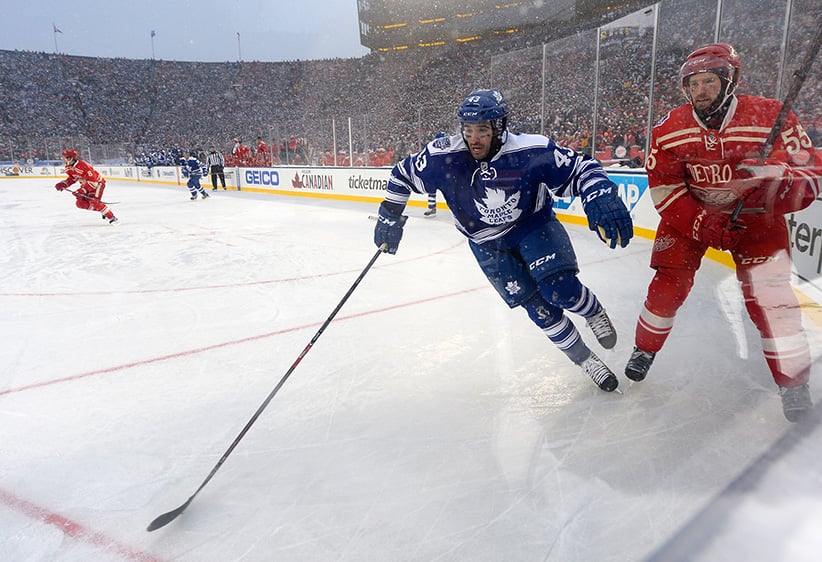 The weathered blue and brown leather notebook with the hand-written label might qualify as Canada’s most important founding document. The minutes from the first board meeting of the National Hockey League make for pretty dry reading, but there was no shortage of drama at Montreal’s Windsor Hotel on Nov. 26, 1917. The owners of four franchises from the National Hockey Association—the Ottawa Senators, Quebec Bulldogs and Montreal’s Canadiens and Wanderers—had gathered together to get rid of Eddie Livingstone, the man who owned the fifth team, the Toronto Blueshirts. A noted jerk, Livingstone had spent years fighting his partners in the boardroom and in court. So they made a stab at revenge by forming a new pro-hockey league with the same rules and constitution, just with a slightly different name and no him.

It didn’t work out exactly as envisioned. Quebec backed out, and desperate for a fourth team, the NHL created the Toronto Arenas, gifting them all of Livingstone’s contracted players. They won the first NHL-era Stanley Cup in the spring of 1918. The legal battles dragged on for years, however, all the way to the Supreme Court, and ultimately, the Privy Council in London, with the fees and judgments in Livingstone’s favour bankrupting the Toronto team in the process.

It’s not the kind of hockey lore that will be celebrated when the modern NHL kicks off its centennial festivities with an outdoor game in Toronto between the Leafs and the Detroit Red Wings on Jan. 1. The focus for the next year will be on happier history, like the naming of the league’s 100 greatest players, during All-Star Weekend in Los Angeles Jan. 25-27. (A list that will surely be topped by the “official ambassador” of the centenary, Wayne Gretzky.) Hockey documentaries have been commissioned. There are plans for a party to celebrate the 125th anniversary of the Stanley Cup in Ottawa in March. And outdoor games are in the works for the nation’s capital and Montreal to mark the actual 100th anniversary of the first league matches on Dec. 19.

MORE: Why the disappearance of NHL fighting is a good thing

Yet the National Hockey League, now a US$4-billion a season enterprise, continues to pay quiet tribute to its money-hungry roots. Scotiabank, Bridgestone and Coors are all title sponsors of various centennial events. The league recently announced a multi-year deal to make Dunkin’ Donuts the official “U.S. coffee, donut and breakfast sandwich of the NHL.” A 31st team, the Vegas Golden Knights, will join play next fall, after financial services billionaire Bill Foley paid a US$500-million expansion fee. And last month, league commissioner Gary Bettman set the clock ticking toward another lockout, offering to send NHL talent to the 2018 Winter Olympics in Pyeongchang, South Korea, if the players’ association agreed to extend the current collective agreement by three more years. (The NHLPA rejected the idea.)

The original minute book, meanwhile, will go on display at the Hockey Hall of Fame in Toronto next spring, as part of a special NHL centennial exhibit. The exact content is still being worked out—with more than 20,000 league-related items in the collection, narrowing things down is a big task for the curators at the hall. But a past display for the 100th anniversary of the Canadiens, and a current exhibit on the Leafs (who hit the big 1-0-0 in 2017, if you include their predecessors the Arenas and the Toronto St. Patricks) provide hints: a tattered program from the Arenas’ first season, Ace Bailey’s wood stick, and a moth-eaten jersey from the 1934 all-star game held in his benefit after Boston’s Eddie Shore levelled him from behind, cracking his skull and ending his playing career.

MORE: Visions of the year ahead, from politics to sports and beyond

Ron Ellis, now the program director of the hall’s development association, played more than 1,000 games for the Leafs over 15 seasons, spanning the Original Six era through expansion to the high-flying Gretzky years. The league’s history was always present and part of the game, he says. “When I became a Leaf, I knew that the tradition was there.” Post-injury, Ace Bailey served as the timekeeper at Maple Leaf Gardens from 1938 to 1984, and lent Ellis his sweater number, the now-retired “6.” King Clancy, the superstar defenceman for whom the original Buds owner Conn Smythe paid $35,000 in 1930 (the proceeds of a good afternoon at Woodbine racetrack) was part of the team’s front office.

In 1967, his third full season, Ellis made history himself as the youngest member on the veteran team that won the franchise its 13th—and 50 years later, still latest—Stanley Cup. In the clinching Game 6 at home, Ellis scored the first goal on a rebound from a Red Kelly shot. “I had a wide-open net to put it in and I didn’t shank it, thank goodness,” he recalls.

It’s the kind of hockey memory that could endure for a century. After all, it’s already lasted 50 years.