Why Canada needs the CFL’s ‘Diversity is Strength’ campaign 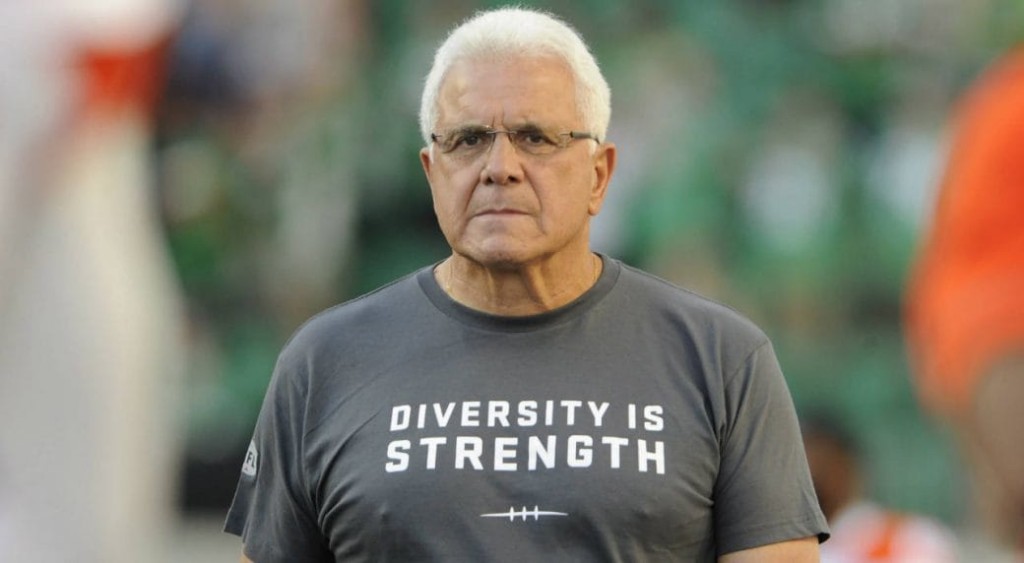 B.C. Lions head coach Wally Buono sports a “Diversity is Strength” T-shirt on the sidelines before taking on the Saskatchewan Roughriders in CFL football action in Regina on Sunday, August 13, 2017. (Mark Taylor/CP)

When Wally Buono was asked by the CFL if he’d support the early release of the league’s “Diversity is Strength” campaign last weekend, the general manager and coach of the BC Lions didn’t hesitate.

The Lions were set to meet the Saskatchewan Roughriders on Sunday in a regular-season game that seemed unimportant in the shadow of tragic events that had occurred in Charlottesville, Va. During a hateful and violent march led by white supremacists, an act of domestic terrorism killed 32-year-old counter-protester Heather Heyer and seriously injured many others.

Many prominent athletes forcefully rebuked the disturbing scene of neo-Nazis and KKK members marching through the streets of Charlottesville — and of U.S. President Donald Trump’s initial and then later repeated assertion that there were many sides to blame for the tragic violence that occurred. However, no major American professional sports league made an official statement in the immediate aftermath.

Meanwhile, the CFL decided that if it has any platform at all, it had to use it, and both Buono and the Roughriders got on board. It was a quick, bold decision.

And it was the right one.

Buono, who emigrated to Montreal from Italy when he was two years old, views the diversity being attacked in Charlottesville as essential to the success of both Canada and the United States, where his wife is from. His father worked in construction, struggling to learn a new language and support his young family in a new country — one that is continuing to be built by people with similar stories, coming from all over the world.

“Diversification is a big part of why I’m here and why people like me are here,” says Buono, one of the most successful coaches in CFL history. “When you look at the CFL it’s almost a microcosm of that. You’ve got players from all different nationalities.”

The Diversity is Strength shirts were initially created for the league’s Canada 150 campaign to be launched later in the season. When the league got the okay from both teams, they flew a batch with a league employee from Hamilton to Saskatchewan in time for Sunday’s game.

Buono told his players and coaches they didn’t have to wear the shirts if they didn’t feel comfortable. But there wasn’t any resistance. Players on both teams wore the message proudly.

Jeff Keeping, president of the CFL Players’ Association and an offensive lineman for the Winnipeg Blue Bombers, says the league’s multicultural cross-section of players creates unique families, where much bigger issues than Xs and Os are discussed in the locker room.

“There’s mixing of nationalities, race, religion, creed — all those kinds of things — where people are coming together,” Keeping says. “We just thought it was important to get that message out now.”

The CFL’s Diversity is Strength campaign focuses on the parallel between the diversity that makes up the league and that which makes up the country. But by no means is Canada a nation that’s perfected it. Not when black people are disproportionally targeted by police. Or when Indigenous people remain marginalized by a system that has never truly treated them as equal citizens. Or in a year that started with the murderous rampage of an Islamophobic terrorist who killed six people in a Quebec City Mosque.

The list goes on and on. Canada is a nation built on diversity, but not one that unilaterally supports or promotes that diversity.

That’s why the CFL’s shirts and the message printed on them should resonate — and serve as a rebuke — as much here in Canada as they do in the United States.

Some might believe it’s best for pro sports leagues to stay on the sidelines of history. But that ignores the record of professional sport itself, which is intertwined with the ugly history of racism. The struggle for progress has long been played out on the field and in the arena. To not acknowledge that fact by boldly, publicly condemning the hatred of far-right, neo-Nazi violence in Charlottesville is to sit idle and mute while the stains of the past bleed into the future.

Since the weekend, the NHL has released a statement condemning the use of the Detroit Red Wings’ logo by white nationalists, saying, “This specific use is directly contrary to the value of inclusiveness that our League prioritizes and champions.”

In that they followed the Red Wings themselves. The NFL’s Detroit Lions, whose logo was also co-opted, followed suit. All joined the CFL in supporting diversity over division in the wake of the tragedy.

The CFL is just a football league. Its platform isn’t enormous — but it has one, and it used it. It saw a moment to share an important, well-considered message, and it reacted.