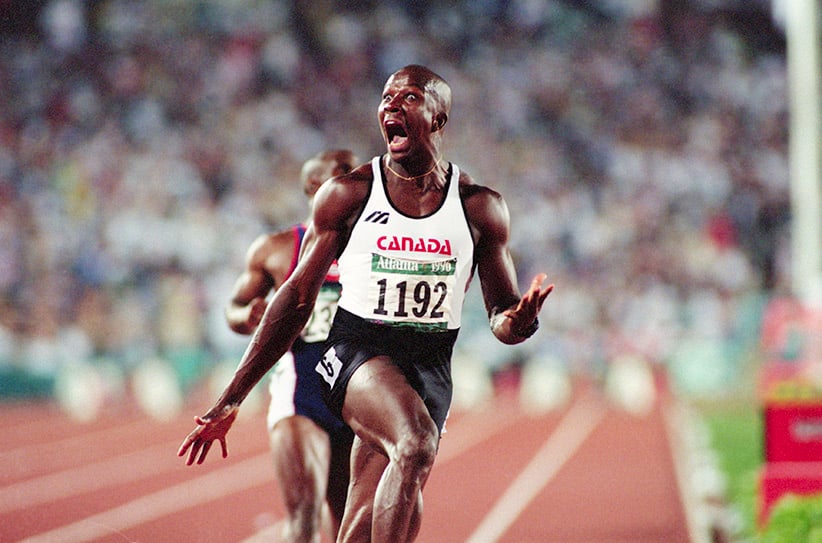 My memory kicks in mid-stride. I’m running through a campground on the edge of Lake Huron. It’s July, late enough in the day that it’d already be dark most other months of the year. The sunlight is angling through the trees, thick and warm and gold.

I could just be running for the hell of it—I’m 10. But the way I’ve always told the story, I’m running because Donovan Bailey is approaching the blocks in Atlanta for the Olympic 100-metre final and I need to find a TV. It’s 1996 (you may have put that together already) and I’m on a family vacation. We’re in a tent and TV-less. If radio is an option, it hasn’t occurred to me. All that has occurred, apparently, is to start running from campsite to campsite and trust that the universe will turn its face to me and smile.

Near the end of my lap of the grounds, I see a behemoth of an RV with thick electrical cables snaking from its side. There’s a small crowd gathered by the door and when I reach them, they part to let me inside. The TV is maybe 14 inches and sunk into the wall behind the driver’s seat. The RV is packed. I park myself on the floor in the centre aisle just in time to see Linford Christie get disqualified. No idea where my parents are.

Bailey settles back into the blocks. The pistol cracks and he falls behind early, but 30 metres into the race he starts to pick up speed — likelihood of victory moves from impossible to possible to absolutely goddamn certain in 9.84 seconds. He crosses the line already celebrating, mouth wide open, arms down at his side, sacrificing time off his world record to personify the emotion felt by an entire country — pure, unbridled joy in the shape of a man.

The RV explodes along with him. I’m so excited I bolt out the door without even saying thank you. I’m back to running the grounds, and just watching Bailey has made me faster. I can feel it. The line repeating over and over in my head is too full of happiness to be articulate: Our guy actually won.

As part of a larger celebration of Canada’s 150th birthday, earlier this year Rogers Media commissioned a poll of more than 1,500 Canadians with the goal of learning more about how they define themselves and this country. One of the questions asked respondents to identify the most iconic moment in Canadian sports history. The given options included Sidney Crosby’s golden goal, Paul Henderson’s Summit Series winner and Joe Carter’s home run in 1993; Bailey’s incredible run was a write-in. Still, my heart’s with Bailey.

Stuart McMillan is Andre De Grasse’s coach. He also worked with legendary track coach Dan Pfaff when Pfaff was coaching Bailey in the lead-up to Atlanta. Here’s a bit of background from McMillan on Bailey’s gold:

“Donovan started really training full-time for track three years before the ’96 Games. Full-time. Before that he wasn’t really running track. [He] trained maybe twice a week, and he’d jump in the odd meet and end up beating these guys who were making national teams. And he saw a guy—I can’t remember who it was, but it was a guy who went to I think it was the ’92 Olympics who he used to beat in high school, and [he] says, ‘Well, I can do this.’ So he started getting a little more serious in ’93—like, he trained three days a week in ’93…. Donovan went from having a PR of 10.42 in 1994 to 9.84 in 1996…. [He] broke onto the scene with an Olympic gold medal and a world record.”

Compare Bailey’s feat to the freshest one among the challengers for the most-iconic title. Crosby’s winner was amazing. It was also unifying; water levels spiked across the country immediately after the goal as millions of Canadians stopped holding it — double the relief/release. But it was also expected. Maybe not exactly as it played out, but Canadians expect to win at hockey. We expected to win at hockey and have our unassuming boy-next-door/best-player-on-Earth turn in a clutch performance long before Crosby fulfilled those expectations.

Until Bailey came along, we couldn’t expect the fastest man on Earth—the fastest man ever—to be Canadian. And we definitely couldn’t have expected Olympic gold from an athlete who started training in earnest three years before the Games.

Bailey’s win was a surprise. And for me, that made it more special.