Why the disappearance of NHL fighting is a good thing

Now, if we could just get some more goals... 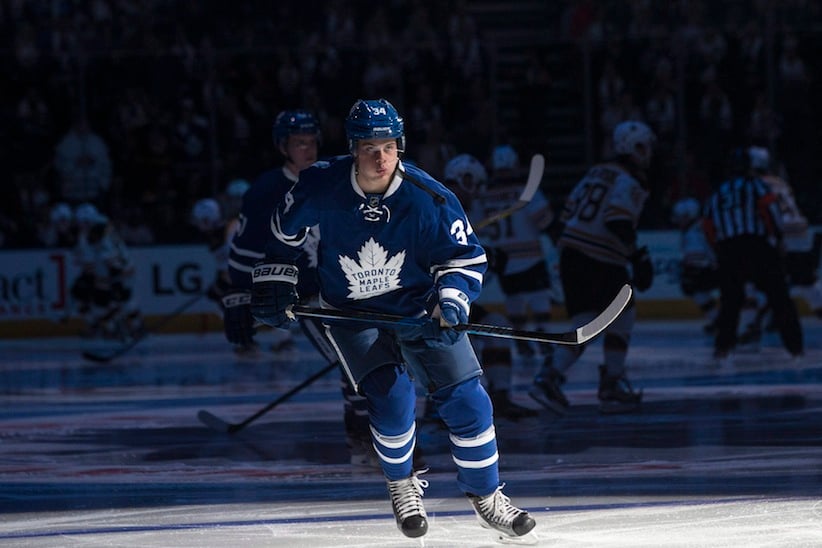 Toronto Maple Leafs’ Auston Matthews takes part in a pre-game skate before their home opener against the Boston Bruins, in Toronto on Saturday, October 15, 2016. THE CANADIAN PRESS/Chris Young

The first goal of the 2016-17 National Hockey League season was scored last week by Toronto Maple Leaf Auston Matthews—on his way to a record-setting four-goal debut. It was the best opening night by a rookie in the NHL’s modern era. And while those goals will likely be the first of many from Matthews, the game between the Leafs and the Ottawa Senators featured another first-of-the-season event that may soon be considered a relic of the past.

Halfway through the first period, Matt Martin of the Leafs squared off against Senator Mark Borowiecki for the first fight of the young NHL season. It was a standard jersey-tugging, quick jab affair, a brief interlude of violence in what was otherwise a very entertaining and civilized hockey game.

Fighting was once considered as essential to a good old hockey game as breakaways, broken teeth and scintillating saves. No longer. Fights have been in free fall for decades. From a peak of more than one fight per game in the late 1980s, the NHL now averages about one fight every four games. As recently as the 2009-10 season there were more than 170 games with two or more fights; last year saw just 50 multi-fight affairs.

The reasons for this turnabout are numerous. The rigid confines of a salary cap means teams now favour skill over goonmanship; the iconic tough guy who sat at the end of the bench waiting for a chance to fight his opposite number on the other team is long gone. The NHL has also introduced new rules to discourage ﬁghting. Concern over concussions and changing societal values likely play roles as well, although there will always be fans drawn to the raw emotion and physicality of a hockey fight.

MORE: Wayne Gretzky on the love of his life

The biggest changes are still to come, however, as young hockey players are now arriving in the NHL having never been exposed to a culture of on-ice fighting. Starting this year, players in the Ontario Hockey League (OHL) who fight more than three times in one season will receive a two-game suspension. Suspensions for repeated fighting are a proven way to get players to keep their gloves on. The new rule supersedes an earlier 10 fight-suspension rule; last season no player in the OHL exceeded that threshold. Major junior leagues in Quebec and Western Canada have introduced similar, albeit less strict, changes. The Canadian Junior Hockey League, a collection of leagues with teams in smaller towns—teams like the Trail Smoke Eaters, Pembroke Lumber Kings and Yarmouth Mariners—has also cracked down on repeat fighters. And fighting is unknown in U.S. college leagues, where each fight earns a one-game suspension.

Every significant feeder program for the NHL in North America is thus taking important steps to eliminate fighting among its graduates. It’s only a matter of time before the concept of fighting as a hockey necessity is entirely bred out of young players.

MORE: The last days of the hockey brawler

So what will a fightless NHL look like? Traditionalists such as Don Cherry often complain that hockey will be overcome by slashes and elbows. The threat of fighting is assumed to keep dirty players in line. Certainly there remains an element of this in the NHL today. After the Martin-Borowiecki bout, for example, the second fight of the new NHL season saw Milan Lucic of the Edmonton Oilers deliver a message to Calgary Flame Deryk Engelland after he drove Oilers superstar Connor McDavid hard into the boards. Lucic’s message: go after my team’s best player and you’ll have to face me. Yet this sort of self-policing is rapidly becoming outdated as the NHL steps up off-ice enforcement. The use of video review and a growing body of common-law type decisions has established a reliable method for dealing with dangerous play. As fighting disappears, there’s been no obvious increase in spearing, boarding or other dirty acts.

Perhaps the biggest concern for the NHL should be the curious connection between fisticuffs and putting the puck in the net. Both goal-scoring and fighting were at modest levels in the pre-expansion NHL of the 1960s. Both steadily increased in frequency over the next two decades, peaking in the mid-to-late 1980s at eight goals and 1.3 fights per game, a time when the overall entertainment value of hockey was arguably at its peak. Since then, however, goals and fights have fallen in tandem to levels not seen in 50 years. Of course much has changed over the past half-century: players have gotten bigger, goalie equipment has expanded and coaching has improved—all of which stifle the game’s most creative goal scorers. The challenge for the league today is to dispense with the anachronism of fighting while bringing back goals and a sense of excitement to the world’s fastest game.