Will co-hosting a World Cup put Canadian soccer on a roll?

Proponents claim the 10 games Canada hopes to stage in 2026 will inspire a new generation of stars. The history of sports mega-events begs to differ. 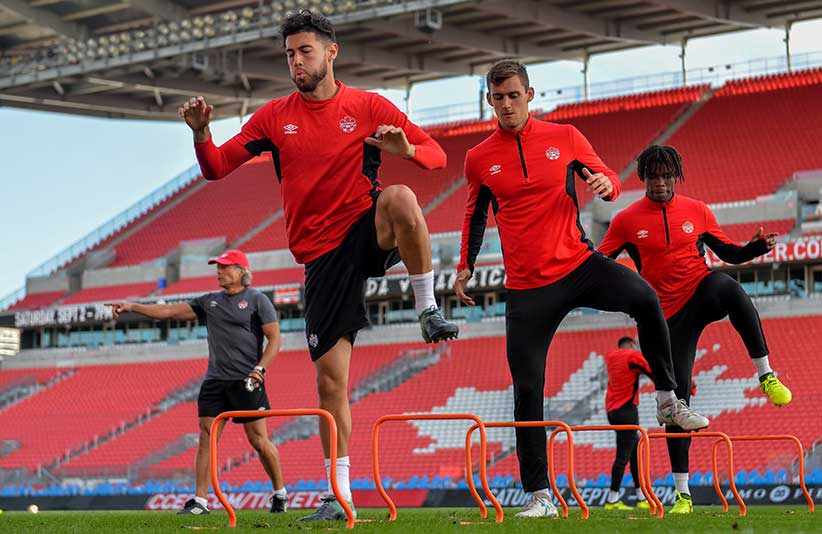 The world’s most watched sporting event could be coming to a city near you in 2026. A joint Canada-U.S.-Mexico bid is the frontrunner to host the expanded 48-team, 80-match men’s soccer World Cup when FIFA makes its decision next year.

Under the terms of the collaboration, Canada and Mexico will stage just 10 matches each, with the U.S. getting the bulk of the games. But Peter Montopoli, general secretary of the Canadian Soccer Association, doesn’t want the focus to be on the number of matches. He says co-hosting the tournament is a significant opportunity to develop the game in this country.

FIFA will release its requirements for the tournament to bidders this month, and Montopoli refuses to make an estimate of the budget or the potential economic benefits of the tournament without them. Previous hosts have treated the finals like a debutante ball, an opportunity to showcase their development and success to a watching world. The result has often been unfulfilled infrastructure promises, white elephant stadiums and billion-dollar deficits. Canada is unlikely to do much major building for the tournament, though, leaving the CSA free to focus on the social and sporting impacts of hosting.

Montopoli says anticipation of the finals will help promote the game, and inspire a new generation of potential stars. “Youth [will] be looking up in the next decade to see this competition held in Canada, and to aspire in their generation to be the next Junior Hoilett [or] Alphonso Davies,” he said, referring to a 16-year-old who was named young player of the tournament at this year’s CONCACAF Gold Cup. The 1994 World Cup helped establish the sport in the U.S., he notes.

RELATED: Why Americans were afraid of soccer

There is precedent for elite sports development linked to hosting mega-events in Canada. Own the Podium, a not-for-profit organization, was set up with the goal of topping the medal standings on home ice at the 2010 Winter Olympic Games in Vancouver. In the event, Canada came third overall, but set a record for the most golds won by a country at a single Winter Games. The program has since continued to fund elite athletes, to the tune of some $63 million annually, although last year Olympic bronze-winning sprint canoeist Thomas Hall criticized it for focusing too much on sports in which Canadian athletes are likely to be medal contenders.

But it’s not clear that hosting the World Cup will kick off a golden new era of Canadian soccer. While kids—and adults—will no doubt be thrilled to watch global stars tackle and shoot before their eyes, hosting mega sporting events doesn’t necessarily lead to talent development or success at the elite level. Nor does there seem to be a grassroots participation problem. A clearer reason to host the World Cup may simply be that, well, we can.

Certainly, Canada has no problem getting kids on to soccer fields, says Simon Darnell, an assistant professor at the University of Toronto’s faculty of kinesiology and physical education. “There are more kids registered in the Oakville soccer association than all of amateur basketball in the entire province,” he says, a detail he picked up at a recent Basketball Canada event. But strong grassroots participation does not necessarily lead to elite success—witness the No. 95 rating of the Canadian men’s soccer team in FIFA’s national rankings, just behind the considerably less populous Cyprus.

RELATED: Soccer vs. hockey: Who plays what in Canada

There’s also reason to doubt a clear connection in the other direction. A 2015 study by researchers at the University of Toronto found that an Olympic gold medal-winning performance by an athlete does not lead to increased participation in that sport in the victor’s home country. Even if it did, there’s no guarantee there would be coaches and facilities to accommodate the new participants, notes Darnell, who is not one of the study’s authors. He also points to research from the United Kingdom that found that elite events inspire a desire to watch more sports, not necessarily to participate in them.

On the grassroots engagement front, Montopoli points out that an impact evaluation of the 2015 Women’s World Cup found that a third of girls aged nine to 17 who hadn’t been participating in the sport said they were likely to the following season. And access to facilities may not be a problem for young dribblers and tacklers inspired by seeing the world’s best players up close. The CSA sees the hosting of World Cup 2026 as an opportunity to expand the sport’s infrastructure base in the country. Montopoli says the federation has been in discussion with the federal government about building team basecamps, where participating squads will practice prior to, and perhaps during, the competition. Those facilities could then be used for amateur and elite training after the event. There are also plans for a domestic men’s league.

WATCH: What it feels like to take a penalty kick with Canada’s national women’s soccer team

The 2015 tournament saw the highest attendance of any FIFA event other than the men’s finals, and the CSA estimates the economic impact at half a billion dollars. That success is an integral part of the messaging around the current bid. “It’s not coincidental that FIFA tries to place things like the Under-17 and Under-20 World Cups for men and women [or the Women’s World Cup] in countries that they maybe have an eye on as potential hosts for future events,” says David Downs, the director of coaching at Ardsley, N.Y.-based youth soccer program River Towns United and the executive director of the unsuccessful U.S. bid committee for World Cup 2022.

The impact of hosting in 2026 could be considerably larger. Hundreds of thousands of fans follow their teams to men’s World Cup finals, Montopoli says, and Canadians were the top ticket purchasers among non-competing nations at the last two tournaments. “I think that speaks volumes to the importance of a men’s World Cup and what it means for Canada to be participating in it.”

RELATED: The economics of the World Cup

But there’s a key difference between the 2015 women’s tournament and the prospective 2026 men’s World Cup: Canada were real contenders in the women’s field. The women entered the finals ranked eighth globally, and made it as far as the quarter-finals. The national men’s team, by contrast, last appeared at a World Cup in 1986, and failed to make the final round of qualifying for next year’s tournament in Russia. Whether Canada will receive an automatic spot in the group stages in 2026, as every other host at a major international soccer tournament historically has, remains unclear—Montopoli says the CSA will make the case for it, but it’s FIFA’s decision.

The distribution of group and knockout fixtures across the three host countries has yet to be determined, although their respective teams will undoubtedly play as many games as possible on home soil. But the expanded field of 48, instead of the 32 at recent tournaments, increased the chances that Canada will see some less-than-iconic matchups. A game like Jordan versus Panama—a realistic possibility, given where those teams finished in 2014 qualifying and the extra spots their confederations will receive for 2026—could prove less inspiring to Canadian kids in the stands than, say, Germany taking on Argentina.

With stadiums and infrastructure already in place and the costs of staging the event distributed across three countries, World Cup 2026 is unlikely to leave behind the negative legacy of the tournaments in South Africa and Brazil. But if the risks of hosting are small, it’s not clear that the potential rewards are significant. Hosting a few World Cup games will not turn Canada into a soccer powerhouse.