Why so glum, chum? One man's crusade against pessimism. 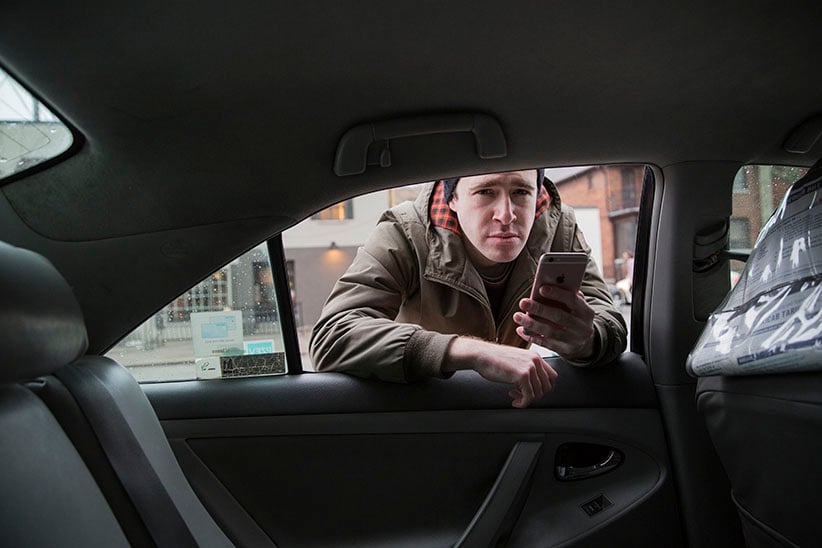 Feeling glum? Could it be because America’s best days are behind it, China’s economy is headed for a hard landing and the oil price crash is a harbinger of another global recession? Robots are stealing all our jobs, Uber is endangering lives, and technology is sabotaging the male identity. Self-driving cars will never become popular because people like the feel of driving too much, but if they do succeed they’ll unleash mammoth insurance battles and spark road rage from other drivers. And if that’s not enough, smartphones are wrecking romance, Facebook is destroying marriage, GMOs are wreaking havoc on the environment, and artificial intelligence will one day rise up and kill us all. Oh, and high-tech brooms are ruining curling.

You could say pessimism is booming. But then, pessimism has always been a growth industry. Since the dawn of humankind, we’ve been inclined to believe everything is always getting worse.

Enter Louis Anslow. Last fall the 24-year-old British web designer, currently living in Toronto, started the Twitter account Pessimists Archive where he scours newspaper and media archives for wrongheaded doom and gloom prophecies about technology and human progress, and then mocks them. The account has become popular among tech watchers—Marc Andreessen, the co-founder of the Netscape Navigator web browser in the early 1990s and now a prominent Silicon Valley venture capitalist, is a fan—while also being targeted by critics.

Here are 10 examples of undue pessimism dug up by Anslow, followed by a Q&A. 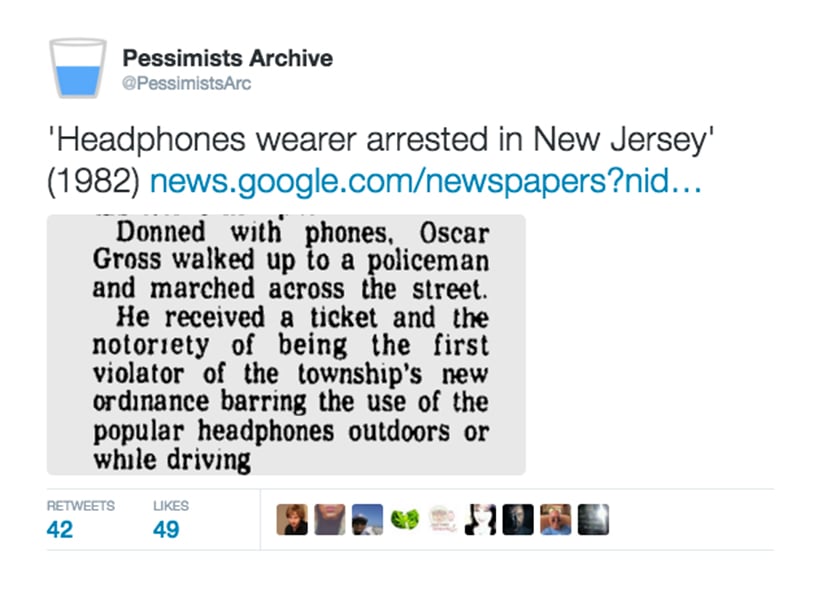 Q: What led you to start the Pessimists Archive account?

A: I’ve always found it very frustrating that pessimism is so prevalent in popular culture: microwaves are going to give us cancer; everyone’s addicted to TV or the Internet or their phones. You’re missing the bigger picture. I wanted to point this out. People tend to take pessimism so seriously in the present, but it’s so ridiculous when you look back. One thing that really pushed me to set up [the Twitter account] was that tech pessimism was getting really powerful. It felt like there wasn’t much pushback and it was really frustrating. It was getting to a point where I thought: “This is my protest.”

Such as your recent tweet of an article about horse-drawn cab drivers protesting the dawn of motorized taxis.

It’s really funny because the same thing is happening now [with Uber].

I’ve read stuff about when two-way radios became affordable and popular. Taxis were obviously using them to find fares—like a dispatch—and it was the cause of this controversy.

People were just hailing and then suddenly you can communicate across the city instantly? It was causing problems. The New York Taxi Commission banned [two-way radios]. It was competing private services that were using them first and [the Taxi Commission] got really annoyed with it. Even back in the ’60s, they were putting their foot down on improving the service in any way, which is really interesting.

Do you ever feel threatened when new technology comes along?

No. I feel more threatened by the pessimism. You have GMOs, for example, which have this incredible amount of hysteria around them. It’s concerning. There’s genetically engineered rice that [produces pro-vitamin A], which people in Third World countries have trouble getting access to. It’s going to stop people from going blind—and there’s all these protests to stop this rice.

A lot of the examples of pessimism you’ve found seem to be predictions that a business model will fail. Like former Microsoft CEO Steve Ballmer talking about the iPhone.

The iPhone was unveiled 9 years ago today pic.twitter.com/yTsO2oThxL

With the iPhone, people really weren’t sure if that was going to take off.

On the flip side, is there a problem with being too optimistic?

If people overestimate something, it’s usually harmless. Like in in 1950s, they said we’d have flying cars by the year 2000. It didn’t happen, but there aren’t consequences. I think that pessimism can really hold back the development of civilization.

I think the term optimist and pessimist probably aren’t nuanced enough. I like the term “solutionist”—people who focus on solving problems.’ There’s another word and it’s “problemist.” All problemists do is focus on problems.

For instance, cigarettes are killing lot of people. E-cigarettes come along—you can get your nicotine and no tobacco—and most of the anti-smoking groups are against e-cigarettes, even though they’re a viable solution to getting people to stop inhaling tobacco. They don’t seem to care that there’s a solution; they only want to contain problems. They’ve sunk so much time into demonizing cigarettes, it’s almost like a solution puts them out of business.

It’s true. The problem with tech journalism is the companies building some great technology obviously want to communicate those things, so they do so in a press release or adverts. It’s hard for journalists to repeat all that without feeling like they’re doing PR. There’s that dynamic: if you want to feel like you’re doing journalism in tech—because the stories write themselves in many ways—you have to take that [pessimistic] angle. If you say, “This is going to change everything,” you’re just hawking for this company.

Why do you think the media is drawn to doom and gloom?

When you don’t have a good story, the easiest way to trick your readers into thinking you’re doing good journalism is probably taking a pessimistic angle. I think a lot of journalists are guilty of that.

There’s an article about how kids aren’t spending time outside anymore because they’re listening to the radio all the time.

Kids used to play outside before those damn radios came along and ruined childhood! (1939) https://t.co/7Z3cIXkqNu pic.twitter.com/kxFB9IrFHt

They said the same thing about comics. I’m getting depressed about how predictable society is. (laughs)

[With new technology], usually people say it’s not going to work out. And if it works out, they say it’s a fad.

And if it’s not a fad, it’s going to kill everyone or give them cancer, you know?

Gameboy is "addictive, no less so than heroin" (2002) https://t.co/nkG15jvTGI pic.twitter.com/fNAT1YfRyn

Some people have attacked you on Twitter over the things you’ve posted. You seem to embrace the criticism.

I retweet them all. There are a bunch of journalists, from the New York Times to Gawker, who hate Pessimists Archive. They’ve made that very clear. Mike Isaac [of the New York Times] was saying it’s the worst thing ever.

the thin-skinned arc of justice comes for all, and retweeting "journalists got it wrong" paragraphs from 1990 will not save you or your LPs

Sam Biddle [from Gawker] told me to shut the f–k up. I loved it. It’s very revealing that they get so worked up about this. There’s the argument: “You’re cherry-picking history.” That’s valid criticism, but that’s the point of it. I’m not claiming to give a well-rounded view of history. I am only choosing predictions about things that ended up becoming huge. It’s not a peer-reviewed historical site about pessimism and optimism. It’s just an amusing little view into history.

What do you think is behind the growing popularity of the Pessimists Archive? (The account has added roughly 10,000 followers over the past three months.)

I don’t think the account would have got to this stage had Marc Andreessen not followed it. He retweets so many of them. He’s seen this whole process play out over and over again with the Internet, Web 2.0, and Facebook, and seeing all the pattern of pessimism. He must be really bored with it.

It’s very annoying. There are some legitimate questions that need to be asked [about new innovations], but it’s really hard to know which is hysterical pessimism and which is grounded.

What do think of Elon Musk, who’s an optimist about space travel and human transport, but called artificial intelligence “our biggest existential threat“?

He’s interesting because he thinks artificial intelligence could destroy the world. It’s weird because it’s kind of optimistic to think that AI could get to a stage where it could destroy humanity.

Do you have advice for people who are naturally pessimistic?

Don’t stop questioning everything, but don’t let primal fear take over. Wait until you’ve read into it first.

I don’t want to come across as too much of a zealot. I do understand that new things should be questioned, but my strong belief is that we question the wrong things and we’re gripped by hysterical primal fear.