1 presumed dead on Mount Rainier, 2 others flown to hospital

Rescuers spotted a 58-year-old man from Norway at about 11,000 feet. He did not respond. 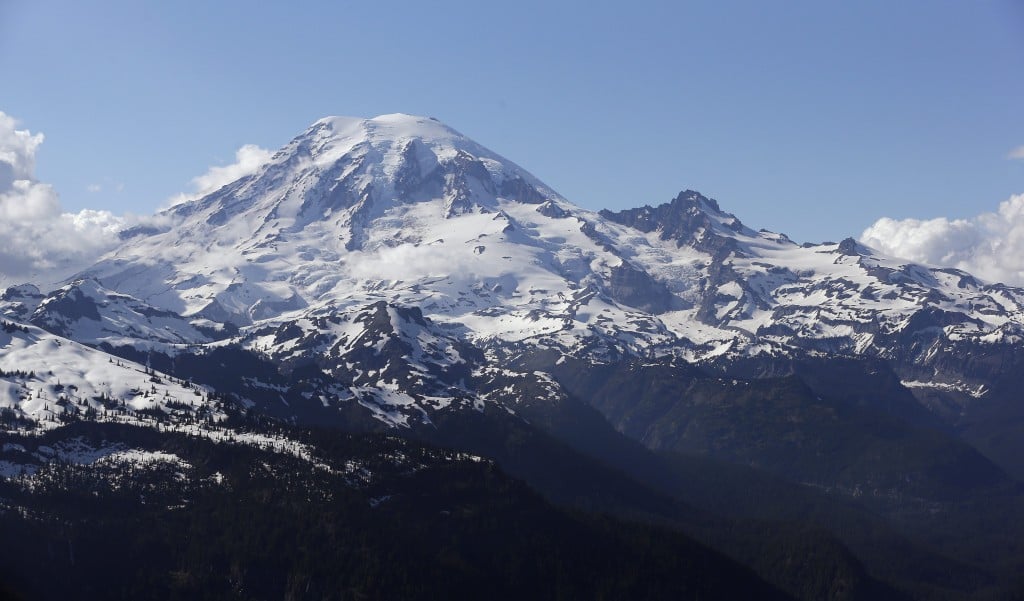 FILE — In this file photo taken June 19, 2013, Mount Rainier is seen from a helicopter flying south of the mountain and west of Yakima, Wash. One climber has likely died from hypothermia and exposure on Mount Rainier after he and his climbing partner were caught in a winter storm over the weekend, a spokeswoman with Mount Rainier National Park said. A Chinook helicopter crew and other rescue teams were working Monday, March 28, 2016, to reach the 58-year-old man from Norway. (AP Photo/Elaine Thompson, File)

MOUNT RAINIER NATIONAL PARK, Wash. – A Norwegian climber was presumed dead Monday on Mount Rainier and two other people were safely airlifted off the mountain after all three were caught on the peak during a weekend storm, a park official said.

Rescuers aboard a Chinook helicopter spotted a 58-year-old man from Norway at about 11,000 feet (3,300 metres). He did not respond or react to rescuers and was presumed dead, said Patti Wold, a spokeswoman with Mount Rainier National Park.

The climber and his partner, a 41-year-old Canadian woman, were trying to reach the summit of the 14,410-foot (4,392-meter) glaciated peak when a fierce winter storm hit Saturday. They apparently took shelter near an area called Gibraltar Ledges on the upper mountain. Temperatures were in the single digits Fahrenheit (minus-17 to minus-13 Celsius) with wind and blowing snow.

On Sunday, the woman descended the mountain and climbers escorted her to Camp Muir, a base camp at 10,188 feet (3,105 metres) on the south slope.

Park rescue crews began looking for the climbers on Saturday night after others reported seeing overnight gear but no people near the equipment at Camp Muir as the storm raged.

Extreme weather conditions prevented rescuers from mobilizing until Sunday. A Chinook helicopter crew tried to approach the mountain but was unable to land because of the storm.

In a separate incident, a 26-year-old man from Lacey sustained frostbite in the storm while snowshoeing alone over the weekend. He set off a distress signal from his locator beacon Saturday night and managed to reach Camp Muir on his own on Sunday.

Last year, about 10,000 people tried to scale Washington state’s highest mountain, mostly between May and September.