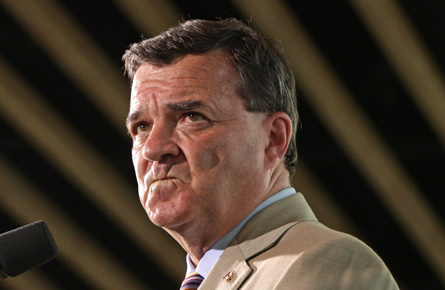 The Globe. Finance Minister Jim Flaherty says Canada’s economic recovery will bring Ottawa very close to balanced budgets in five years but is refusing to promise exactly when the Tories will eliminate the federal deficit.

The Star. The Conservatives admitted today that the federal government deficit would be worse — $101 billion this year and next — than expected and that the government cannot say when it will balance the books again.

Canwest. The federal Conservative government said Thursday it won’t be able to balance its books for at least another five years and can’t pinpoint a year as to when a surplus would emerge. Furthermore, deficits for this fiscal year and next will collectively top $100-billion — or a third more than the original budget expectations.

Feb. 5, 2008. “The way to manage this economy through difficult global times is not—as the Liberal Party would do—to drive us into deficit.”

Oct. 17, 2008. “I believe, based on everything I’ve seen so far, that there’s no reason why the government of Canada won’t stay in balance, why we can’t maintain a balanced budget this year,” Harper said, speaking after a meeting in Quebec City with French President Nicolas Sarkozy. But for future years, he said it would be premature to say if his government will be able to maintain a surplus. “Others are speculating about future years. I don’t think we’re yet in position to know all the information in that regard and I think it would be premature to speculate on that.”

Nov. 6, 2008. “One message was very clear. Don’t be afraid to run a deficit if the deficit is in the best interests of the economy.”

Nov. 24, 2008. “The government of Canada today is in surplus,” he said Sunday at the conclusion of the summit. “The government of Canada today is not planning a deficit. But if the government of Canada decides … that we do have to engage in fiscal stimulus, that government spending is essential not just to shore up economic activity but investment markets, that would be the occasion we would go into what would be called a cyclic or a short-term deficit. But we would only do that if we can assure ourselves that we can do that while preserving a structural surplus, that any return to a normal level of economic growth will immediately take us out of deficit. And that’s the only condition under which we would consider that set of actions.”

Nov. 27, 2008. “Mr. Speaker, as I have said many times, Canada is not currently running a deficit and this is thanks to the good management of the Minister of Finance, who will present his economic and fiscal update later today.”

Dec. 1, 2008. “If we run a deficit of $30 billion in this country, we are running a structural deficit. It took a long time to get out of that problem. We have taken the long-term view, the view that says we have to help Canadian business with the Bank of Canada, with Bill C-50, with ensuring adequate credit in this country. There are more provisions in that regard in the fall economic statement, all good for the country, not running big deficits.”

Dec. 16, 2008. “We’re going to have to run a deficit, do some spending measures we hadn’t planned on doing, but I think, if we do those things, we should be able to come out of this (economic downturn) pretty strong in due course.”

Jan. 27, 2009. “There will be no long-running or permanent deficit … As the economy recovers, we fully expect to emerge from deficit and return to surplus within five years.”

May 14, 2009. “Our deficits will be large, but they will be temporary,” Harper told Quebec municipal leaders gathered for an annual convention. “In fact, in the short term, they will be as large as they have to be to help us weather this recession. As a country, we can afford it. But only if these deficits are temporary and our stimulus spending ends when the recession ends.”

May 26, 2009. “We will run a substantial short-term deficit this year which I would estimate at more than $50 billion.”

June 13, 2009. “He’s wrong,” Flaherty told journalists in a conference call from a G8 finance ministers’ meeting in Lecce, Italy. “Because he says growth rates likely will be slower than I had predicted. Now, if you make an assumption with respect to lower growth rates, then you get the results that he postulates. But anybody can do that.”

June 25, 2009. “If you take out the one-time spending, we have a deficit of only about 1.5% of GDP and we should easily recover from that in the two years following the recession.”

July 10, 2009. “We will allow the deficit to persist if necessary. We will not, in order to meet some timetable, start raising taxes and cutting programs. That’s a very dumb policy … If the recession turns out to be longer than that, for example, or the recovery turns out to be shallower, then that will change the pattern of the recovery from the current deficit.”

(Note: Most are the comments of the Prime Minister, but a few are excerpted from remarks of Finance Minister Jim Flaherty.)