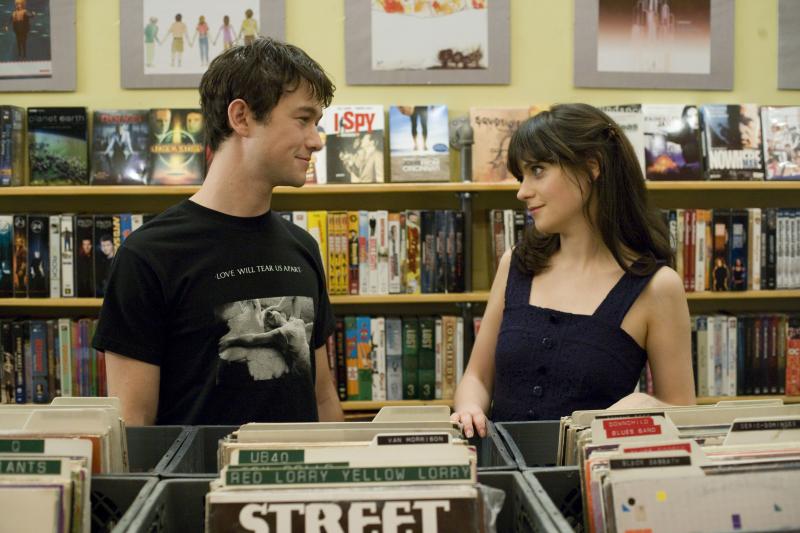 Sometimes a summer burns its way into your brain through a perfect pop song that you can’t get out of your head—a song that forces you to fall in love, then slowly drives you crazy. Or a perfect lover who does the same thing. Or a combination of the two.

For a movie, (500) Days of Summer is a lot like a pop song, a catchy tune that’s indie-cool yet warm and cozy—a pop song by Feist. In fact, it’s about a guy (Joseph Gordon-Levitt) driven crazy by a girl who is a Feist type, and slightly out of his league—a cool, dark-haired rebel with bangs and a come-hither look—a girl called Summer, played by Zooey Deschanel. And just to hammer home her specific sense of style, inevitably Feist’s Mushaboom lights up the soundtrack in the third act.

This is a romantic comedy that works hard to turn the genre inside out and upside down. As the filmmakers make clear from the opening frames, it’s not a love story, but a story about love. And with a hop-scotch narrative that bops around in a non-linear time frame, scrolling back and forth through the digits of those 500 Summer Days, it begins with the end of the romance. We know that it’s doomed from the start, so even in the delirious boy-meets-girl phase the story unfolds as the anatomy of a break-up waiting to happen. The usual stereotypes are reversed. It’s the woman, not the man, who is queasy about commitment. In the tradition of Annie Hall, and any number of French movies, (500) Days of Summer unfolds with an off-kilter rhythm, detailing a relationship with a myriad well-observed ironies, rather than big Movie Moments.

There at least two high ambitions competing with each other here. One is to dazzle us with post-modern conceits—this first feature by director Mark Webb is a maze of playful homages to everything cool and indie, from Bergman to the French New Wave. And that sometimes undermines the other agenda, which is to capture the awkward nuances of a relationship with almost autobiographical realism. Although the story is fiction, it seems to spring from real-life broken hearts and genuine male embitterment. I don’t usually quote press kits, but the one for this picture opens with statements by both co-writer Scott Neustadter and director Mark Webb, who lay their cards on the table with personal statements that go a long way toward conveying the tone of the film.

The writer says the script was triggered by “a monumental, cataclysmic, earth-shattering event at a restaurant called Serendipity in New York – I got dumped. . . hard. . . I was flooded by some powerful emotions: hopelessness, crippling inadequacy, the world ending, that sort of thing. I stayed in a lot during those days – listening to the Smiths on a constant loop, watching old French films and lamenting my not being alive in an era that would appreciate me. In short, I was an asshole.”

As for the director, he recognized his own abandonment trauma when he picked up the script. “I won’t go into the sordid details,” he says, “but suffice it to say pretty girls with rebel hearts are in high demand. Some people end up with their Summer. I did not. We broke up and I entered into this weird limbo – I couldn’t shake that feeling that something had gone horribly, painfully wrong with the universe.”

The result is a movie made from a strictly circumscribed male viewpoint, and one that’s full of insecurity and self-loathing, as a young man finds himself outflanked by a smart, self-possessed woman who may not be The One no matter how much he wants her to be. And when you combine this reverse romance with pop-fetish references to ’60s art films, the result is a kind of alt-Woody Allen movie. But the director’s most pointed homage is to The Graduate—we’re told that his protagonist, Tom Hansen (Gordon-Levitt), has always misunderstood the ending of The Graduate, and at one point we see it re-enacted with him in the picture. (Interesting choice: The Graduate really is the defining romantic comedy of modern America, and to see it again now, with its fore-grounded soundtrack and wild angles, it seems even more contemporary and experimental than it did at the time.)

I find it hard to review romantic comedies, especially ones where the romance is mixed up with a po-mo love for cinematic style. Flat-out comedies have an easy litmus test: either you laugh or you don’t; even if you keep your laughter inside, you can cop to it. Romantic comedies demand an emotional reaction, and if you don’t have one, you wonder, “Is it me, or the movie?” In this case, I found myself being inexplicably irritated throughout the film. Perhaps because I was sitting alone, next to a trio of young women who were having the time of their lives, and talking about it. Made me feel like a rom-com Scrooge. Aside from that, the pop culture conceits bugged me, the way they did in Across the Universe; I don’t really want to see the French New Wave turned into indie Muzak. And Tom’s professional dichotomy struck me as facile. He works as an alienated scribe for a greeting card company and has a repressed dream to break free and be an architect. The greeting card company seemed as broadly contrived as. . . well, a greeting card. And the dream of being architect! How strange for a movie that is trying to go against the grain of Hollywood formula—to go for the most well-worn cliché for frustrated ambition in all of romantic comedy.

But the architecture bit does allow the filmmakers to frame the story with a lot of faux-naif sketching, a la Juno—and producer Mason Novik, by the way, also produced Juno. The story is set in a Los Angeles that doesn’t look like the one we usually see in the movies, and the filmmaker tries very hard to make the buildings seem important, as if they were in New York.

In spite of my bitchiness, I found much to like in (500) Days of Summer, not the least of which is its emotional candour. Gordon-Levitt’s modesty as an underwhelming romantic lead is brave. And I have to admit I was as bewitched as he was with the nonchalant siren played by Deschanel, even though her character was rather thinly sketched. Maybe that’s my problem. Perhaps I was identifying too closely with Tom’s quandary. I don’t know. But after sitting through the film—feeling grumpy and detached but never bored—I cycled home. That’s when I felt my critical impatience displaced by a great wash of emotion, a delicious loneliness that was both romantic and existential. It’s as if I had emerged from an annoying session of acupuncture, then felt a sudden, uninvited release. Romantic comedies can do that—they work on your trigger points; the harder you resist, the harder you fall. I’m always wary of my immediate reaction—only the most banal formula rom-coms slip through my defenses and reduce me to me tears while I’m in still the theatre—a quick popcorn catharsis that’s forgotten the next moment. But the “alienation effect” of this anti- romance disarms you in a different way: instead of enjoying a simple escape into a fantasy love affair, you end up at distanced from the characters, yet stuck with their predicament.

So do I recommend (500) Days of Summer? Sure. By all means. It’s a good date movie, especially when the relationship has entered that limbo between infatuation and deep discussion. But viewer discretion is advised. It’s like one of those pop songs that could get stuck in your head, and overstay its welcome.