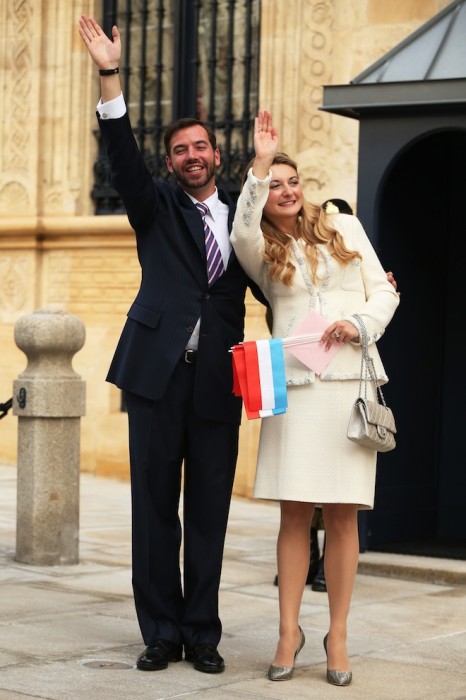 As countries go, the Grand Duchy of Luxembourg is a tad on the small size, boasting just 2,586 sq. km and a population half that of Ottawa. But it does have a sovereign, Grand Duke Henri, and that means his nation gets to enjoy a royal wedding spectacular. And being a staunchly Catholic nation within Europe, the nuptials are a two-day affair.

Today his eldest son and heir, Guillaume, 30, was civilly married to Countess Stéphanie de Lannoy of Belgium. Tomorrow is the big religious ceremony. For Stéphanie, the months between their engagement and wedding has been a rollercoaster of emotions. There is the joy of being engaged combined with the sudden obligatory scrutiny of marrying into a royal family—she very publicly surrendered her Belgian passport and took Luxembourg citizenship and and also carefully explained that the families were paying the lion share of the nuptial costs, not the financially ailing nation.

And unlike last year’s weepy bride who married the ruler of another tiny European nation (I speak of the perpetually depressed-looking Charlene Wittstock who got hitched to Albert of Monaco), Stéphanie can be forgiven if she reaches for a handkerchief tomorrow.

Sure, she gets her prince (well, grand duke) but her mother won’t be there to witness her daughter’s happiness. Two months ago, she died suddenly of a stroke.