A Cliché TV Plot I Haven't Seen Much of Lately 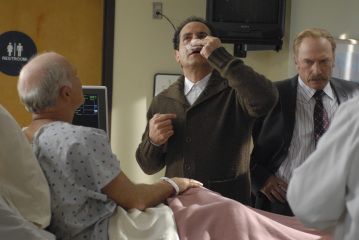 I was just thinking about a plot that used to be done on every show, but — because of the changing nature of TV storytelling, where stories are more show-specific and you can’t always repeat plots from show to show — doesn’t happen very often these days. It’s the “foul play in the hospital” plot. The story is always pretty much the same: the lead character has to check into the hospital for a routine operation. While there, he or she becomes aware that something is fishy, that people are being murdered, and that someone at the hospital is behind this. The hero decides he has to investigate, which involves sneaking out of the hospital room (leading to a scene where he either can’t keep the hospital gown closed, or looks for his pants). Whoever is in charge of the dastardliness at the hospital will usually try to kill the hero either by performing unnecessary surgery or injecting the hero with a lethal drug.

The last time I saw this done was, of course, on Monk, because that’s one of the few old-fashioned detective shows, and this usually happened to detectives. (It happened to Rockford, to one or possibly both of the Harts, and others.) But it used to turn up on shows where the character wasn’t a P.I., didn’t have any particular investigative skills, just because the writers automatically went for this “check him into the evil hospital” idea when stumped for a plot. Buffy the Vampire Slayer did that plot, and while the episode was tweaked a bit to fit her character, it was basically the same story we’d seen on other shows, except that the culprit was a Freddy Krueger knockoff demon instead of the evil doctor.

An odd thing about this plot is that it rarely produced great episodes. It’s not like evil biker gang episodes, which every show used to do to kick-ass effect. These evil-hospital shows are pretty slow and awkward, because they take the hero completely out of his element and leave the other characters wandering around trying to figure out what to do (especially when it’s after visiting hours). But there must have been evil-hospital shows more recently; I’ll bet that at least one of the psychic-lady shows has done one, though I’m not going to watch them all to find out.

Speaking of cliché plots, there was recently a thread at the Home Theatre Forum about “episodes where the lead character goes blind for one episode.” Despite the awkward plot mechanisms required to blind your hero and get him all better in 25-50 minutes, this may actually be one of the most-repeated plots in television history. It’s not done very often these days, but Smallville did it in 2004, because there is no plot too corny for Smallville to use.