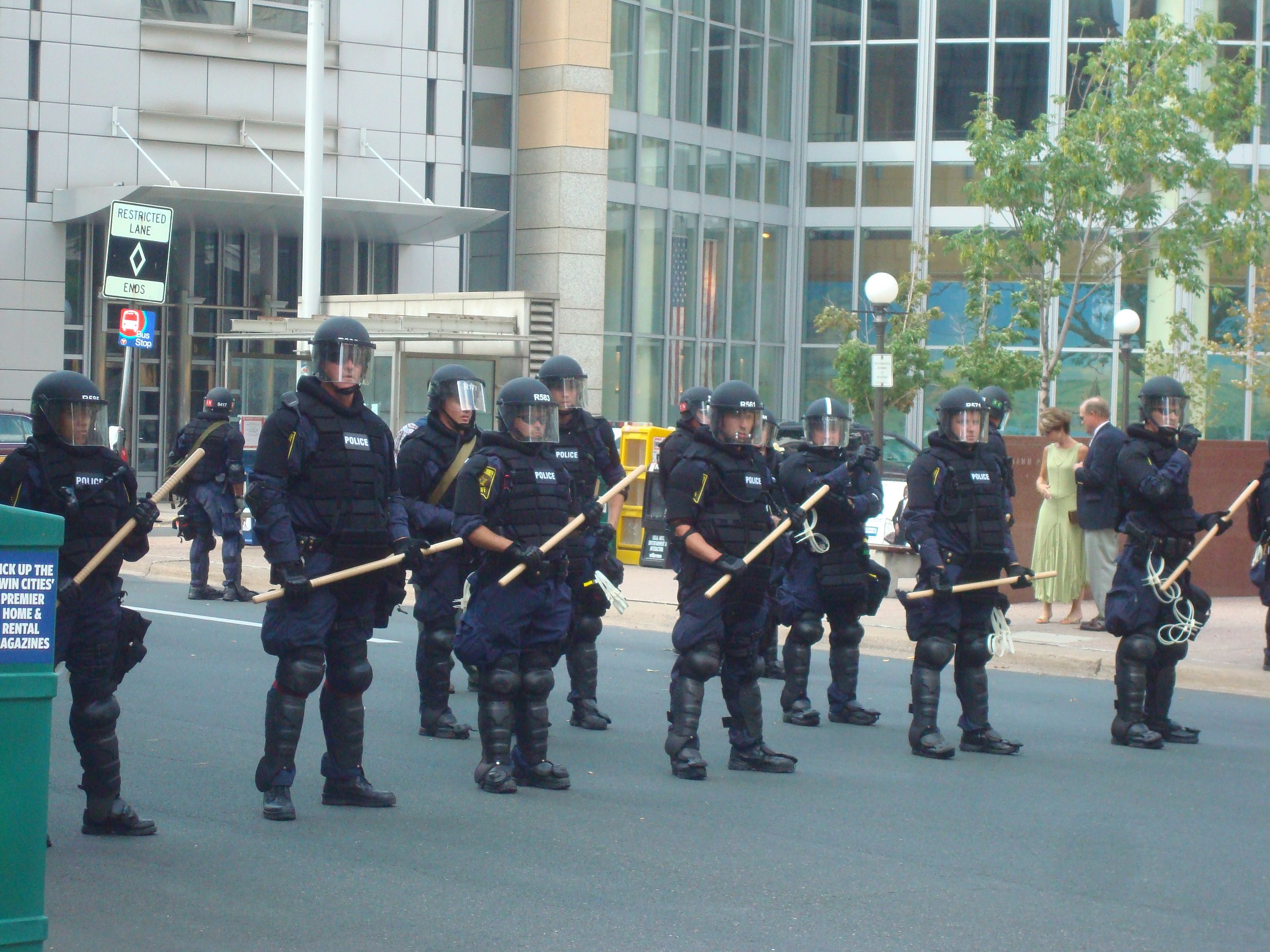 I arrived in St. Paul this afternoon. The vibe here is quite a bit different from Denver which was a big rolicking political carnival. Here the energy is serious, even grim. The hurricane in the Gulf Coast has set a serious tone. Bush and Cheney’s speeches have been canceled along with the rest of the evening program. Parties are being turned into fundraisers. Cindy McCain and Laura Bush showed up at a breakfast for the Louisiana delegates and gave them moral support. A McCain campaign plane was sent to help evacuate the families of Gulf Coast delegates. All the boxed lunches that were prepared for delegates were apparently sent for disaster relief in the Gulf.

Then there are the protesters. The streets in Denver were dotted with cops. Here the cops crowd the streets in big rows, on horses or bikes, with piles of plastic cuffs and billy clubs dangling from their bulky padded body armour which gives them a look of Michelin Man meets Terminator. There are snipers on downtown rooftops. Of course, this is Minnesota and the cops, like everyone else, are super-nice. And if you’re not an anarchist breaking windows with bricks, they are friendly, smile at passers-by, and complain good-naturedly about their hot, uncomfortable suits. 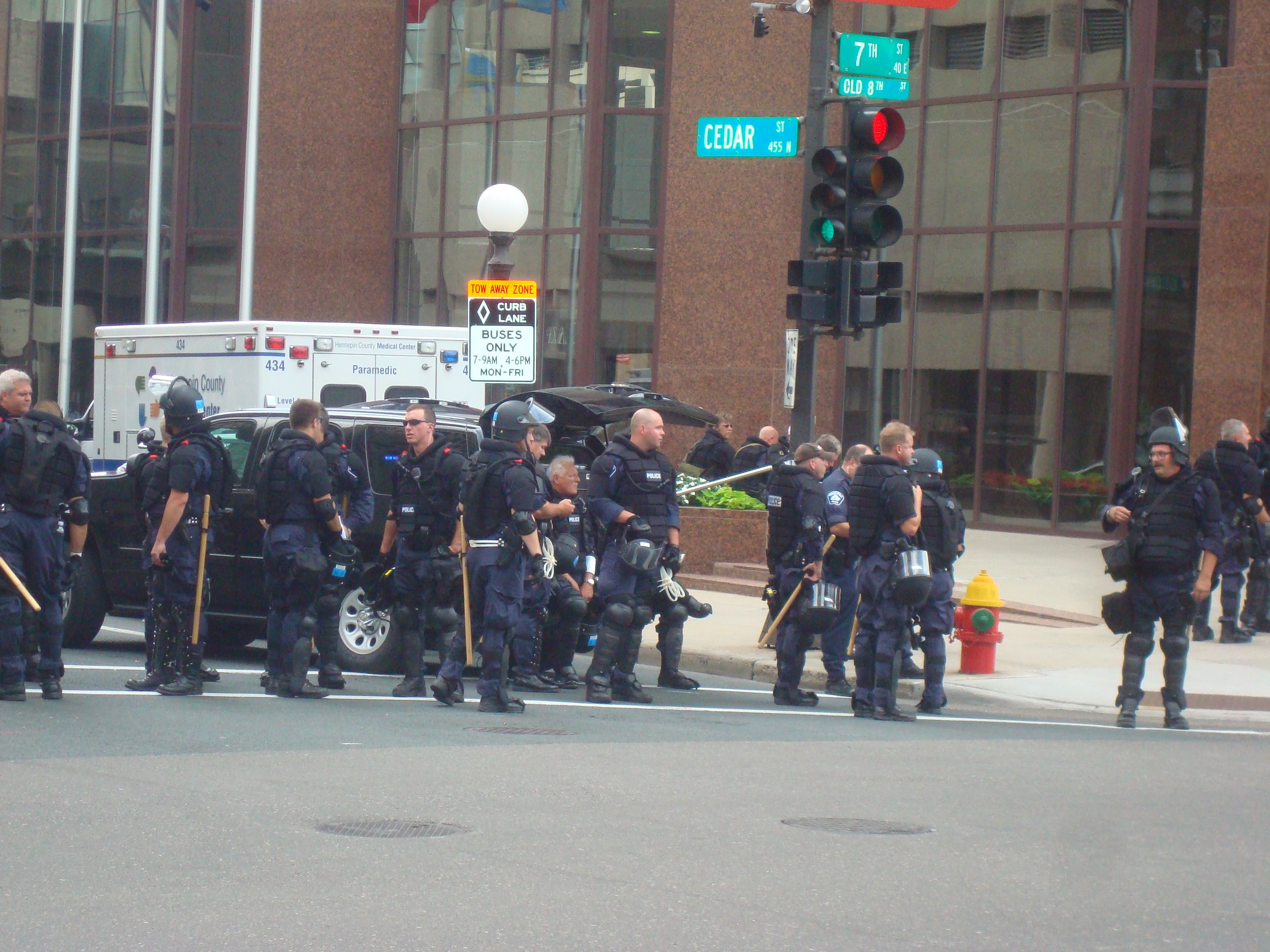 The protesters are a motley group. The majority seem to be against the Iraq War, but I saw signs about everything from Ethiopia to Colombia to Palestine. 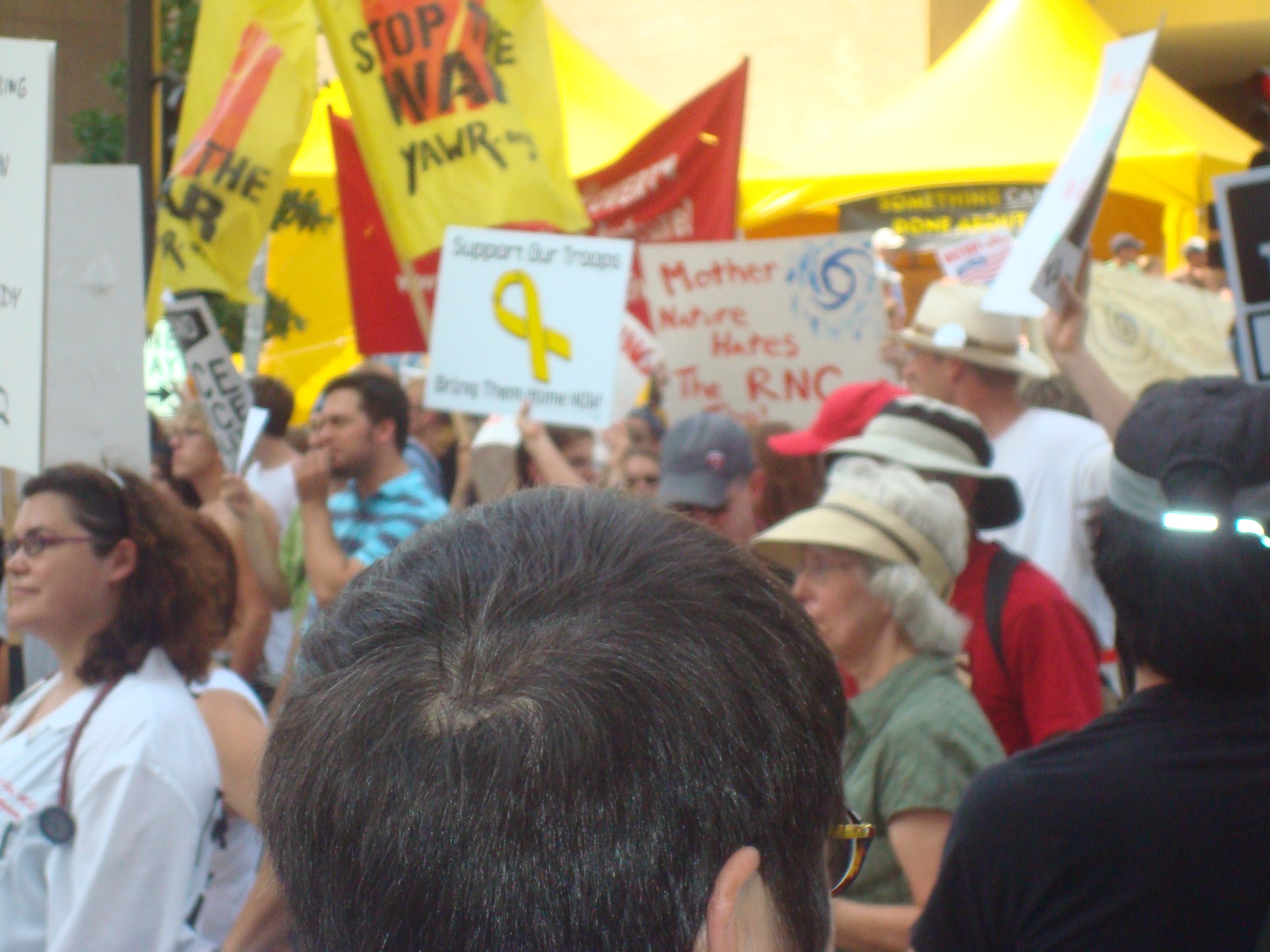 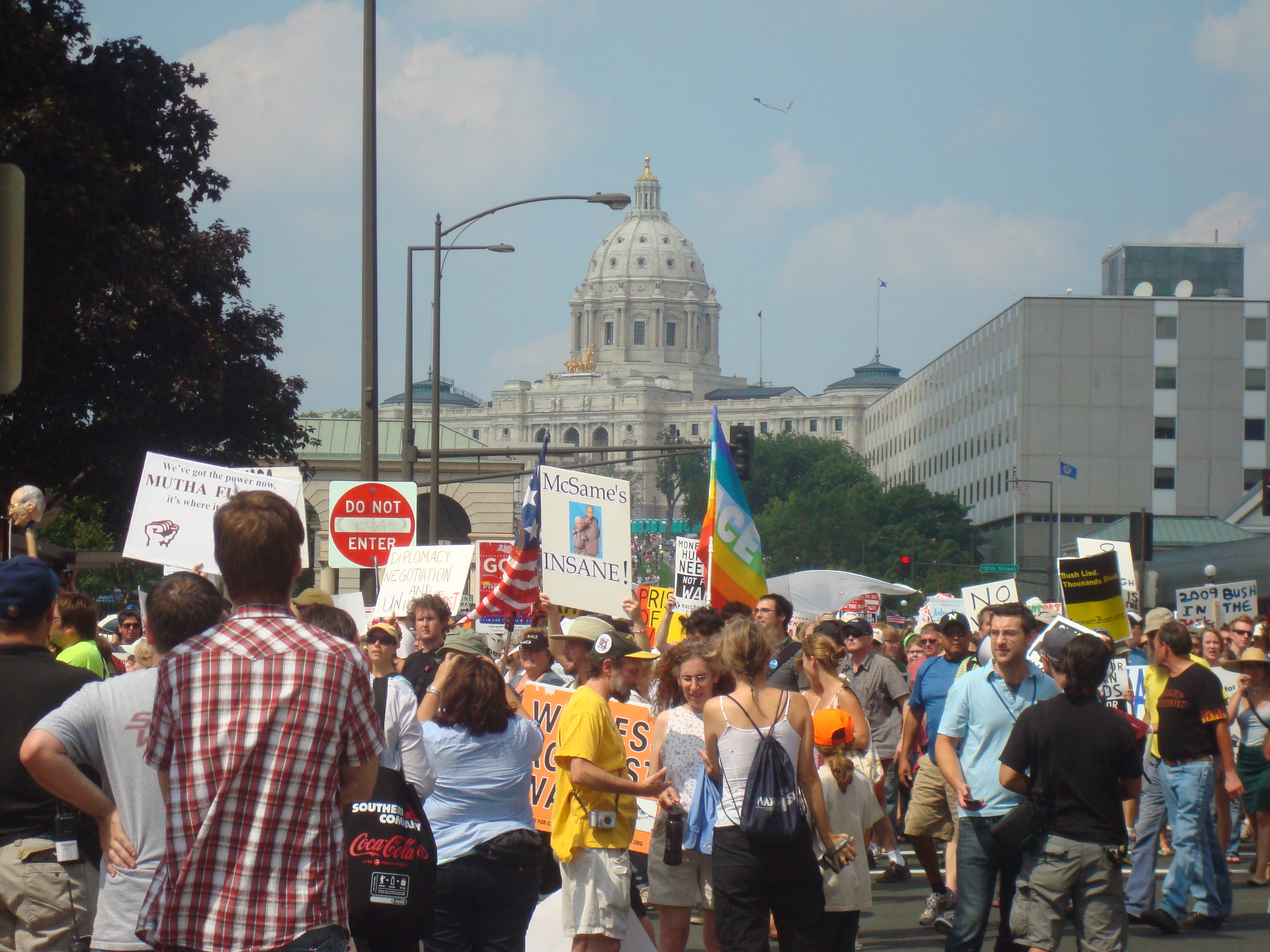 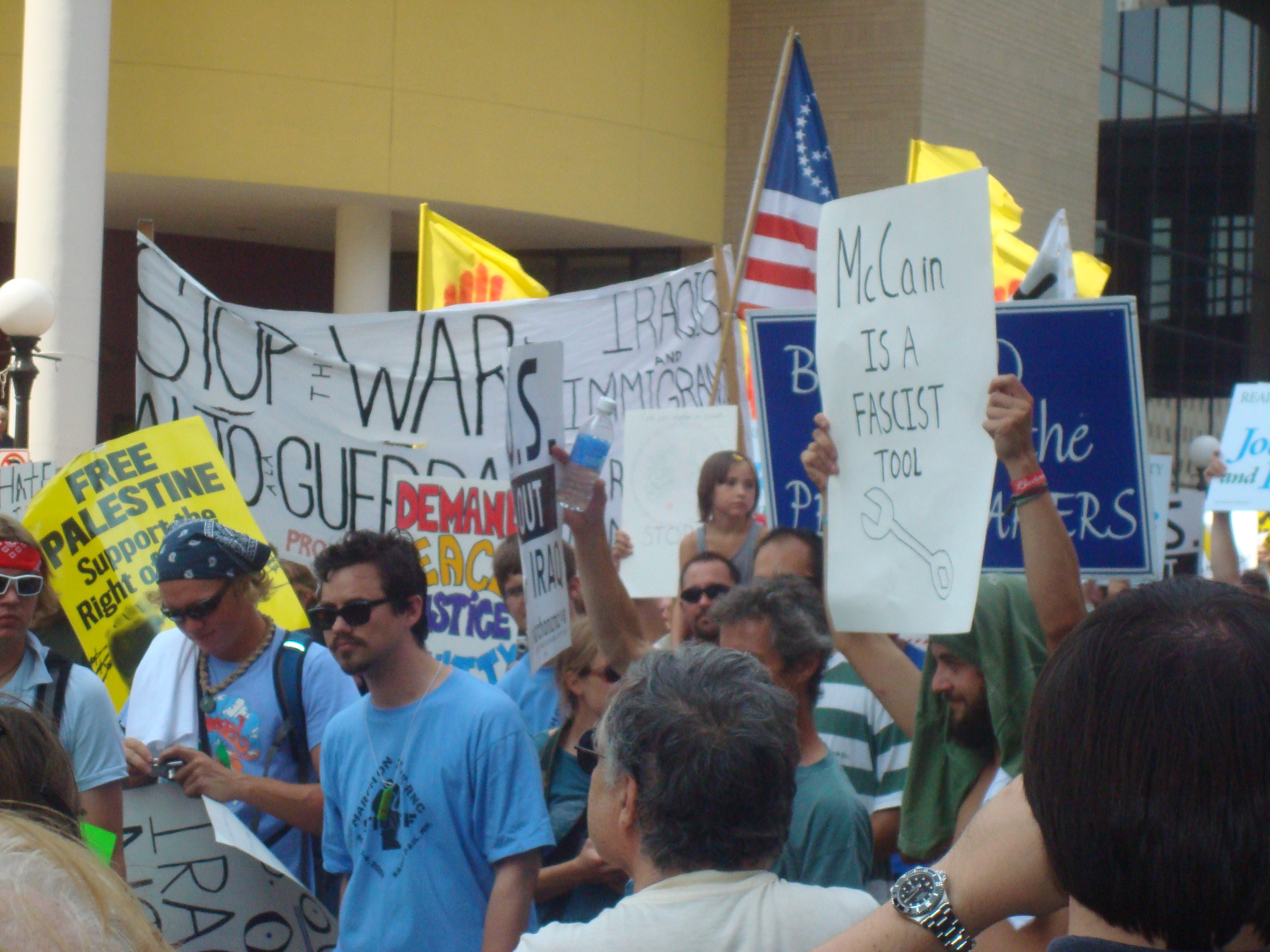 On the other side of the barricades and the x-ray machines and the bomb-sniffing dog, at the Excel Energy Center, I passed by Karl Rove and McCain campaign manager Steve Schmidt striding purposefully surrounded by a gaggle of aides, perhaps on their way to a meeting to figure out how many houses babies McCain now has on the ticket.