A kinder, gentler Clive Owen (but not really)

Clive Owen belongs to a dying breed of Hollywood alpha males. In a world of chick-flick friendly leading boys (Robert Pattison, Ryan Reynolds Michael Cera), Owen and his Brit compatriot Daniel Craig are almost alone in holding the fort of old-school macho grit. But in his latest film, a purely domestic drama, Owen tackles a role quite unlike anything he’s done. In The Boys Are Back, he plays Joe, a suddenly widowed father struggling to hold down his job as a sports writer while raising two boys—an uncontrollable six-year-old (Nicholas McAnulty) and his estranged teenage half-brother (George MacKay). The story, which is based on a memoir by journalist Simon Carr, is set largely in Joe’s rambling Australian beach house, where all hell breaks loose as he patents his own renegade parenting style—behaving more as a friend to his kids than a father.

Australian filmmaker Scott Hicks (Shine) directs The Boys Are Back in a straightforward, conventional style, with the occasional flourish of sentiment. But when you think it about it, this is not a conventional movie. As a deeply flawed yet oddly heroic single father, Owen plays a character that we’ve rarely glimpsed on screen. If you’re a widowed dad in a movie, like Tom Hanks in Sleepless in Seattle, it almost goes saying that you’re a paragon on virtue. But Owen brings the same volatile edge of discomfort to this character that he brings to gangsters and adulterers. It’s a compelling performance.

I talked to both Clive Owen and Scott Hicks when they passed through the Toronto International Film Festival for their film’s premiere. You’ll find a video of my interview with the director at the top of this post. As for Clive, we had a terse, efficient little talk. He was sternly dressed all in black, but he’s a more diminutive, delicate presence than you’d expect. He was cordial, and quick to smile, but you could still detect a simmering impatience, the latent menace that magnifies his screen persona. The actor didn’t waste words, and when the publicist signaled that our time was up, he cut his final answer short with cold economy. Our conversation: 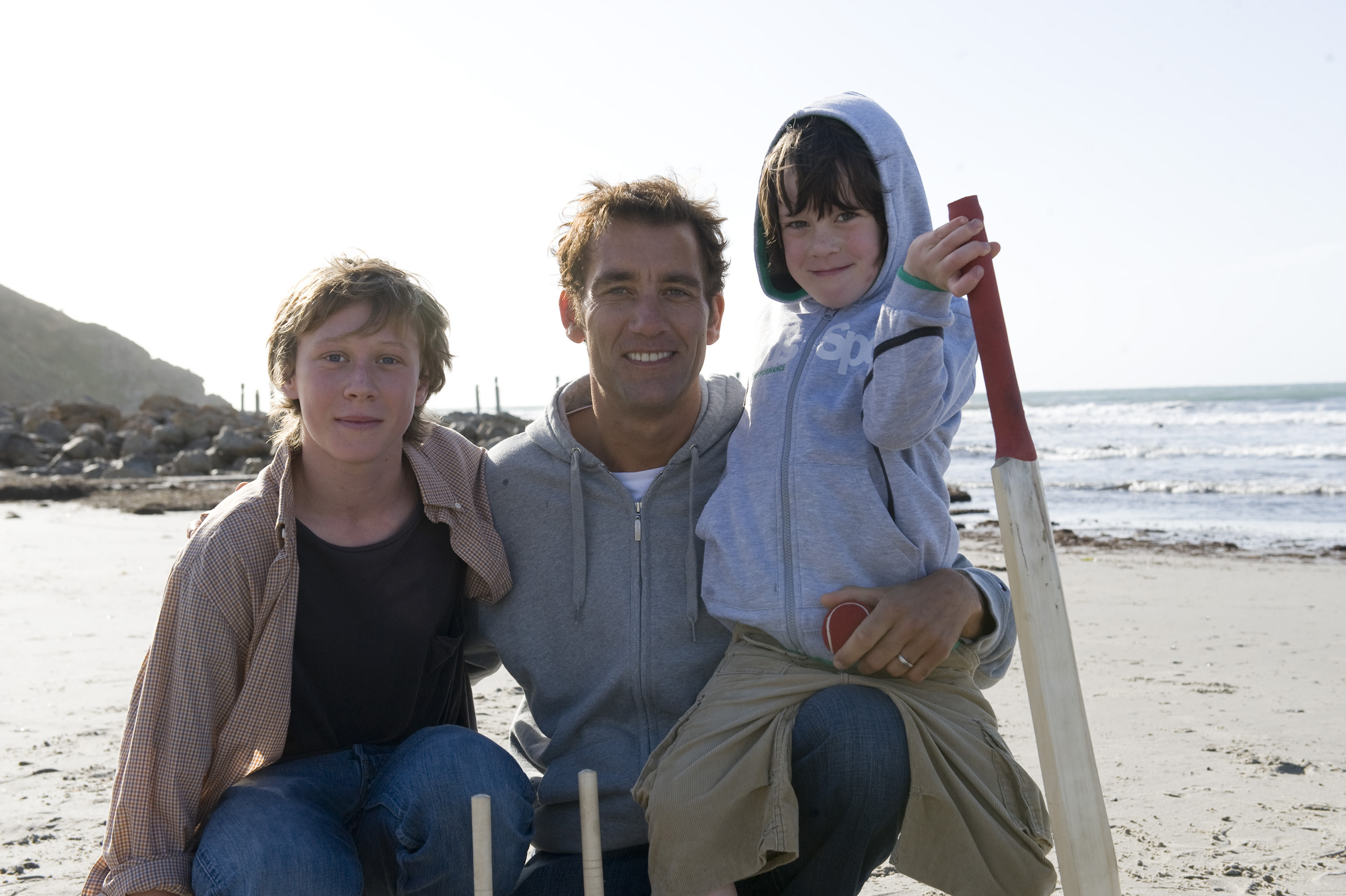 (from left) George MacKay, Clive Owen and Nicholas McAnulty in ‘The Boys Are Back’

Q: This is such a radical departure from the roles you’re known for. Why did you want to go there. Did you feel it was time for a career shift?

A: No, I never have a career plan. I was just very taken with the script. I found it very moving, beautifully written. I’ve got two girls and brought them up and I’d always considered it separate from what I did as an actor. I went off and made movies and then hung with my girls and brought them up. Then suddenly there was this script, which is a real explanation of parenting from a guy’s perspective. And I was very taken with it.

Q: It’s such different terrain from what we’ve seen you doing. Was it challenge?

A: It was very different primarily because I was acting with a seven-year-old boy for most of the movie. I was both excited and nervous about it. Because kids of that age expose any “acting.” They’re not acting. They’re the real thing. It’s not a honed skill. It’s about capturing their magic. It’s not a craft to them. We cast a kid who was incredibly alive and unpredictable. And I’ve got to go toe-to-toe with him. I can look very contrived if I’m not careful. I’ve got to be in that space with him. But it’s very exciting at the same time. And it was something I was really keen to explore.

Q: As a parent of two girls, I assume you’re not the same kind of shambling parent as you are in the film. . .

A: No. I was very passionate that the film not be sentimental. I also wanted to explore the tougher times. Parenting is up and down, and in and out and around. I really wanted to push the scene where he has  a tantrum in the car, we said, let’s make it hard, really hard, not cute. We’ve all been there as parents. Kids before they’re 7 or 8 are like little manic obsessives. They become completely hooked on things and they’re slightly crazy I felt if we pushed that and really explored it properly people would relate to that.

Q: You were a producer on the film. What difference did that make?

A: Because I was there from a very early stage, refining the script, it was a way of being involved in the film and collaborating with Scott and making it happen.

Q: If you think of widowed dads in films, they’re usually saints, like Tom Hanks in Sleepless in Seattle. They’re perfect.  But not your character.

A: That is a huge part of this film. It’s somebody’s life. It’s not a Good Idea for a Movie. Somebody’s lived through this they’ve talked about it and explained it and explored the ups and downs of it. It’s grounded in that. I always like playing characters who are fallible, because that’s what we’re all like. We’re not perfect. He’s trying to do the best he can. I never worried ‘will he be likable.?’ He doesn’t have to be likable. Do you understand him? Do you relate to him? That’s what important.

Q: Even though it’s based on a true story. But in going from the life to the page, for the author, Simon Carr, and to the script and the screen, it must become a fiction of sorts, no?

A: But the heart of the piece is still there. The whole project has come from a very real place; it hasn’t come from a whim of someone’s imagination. And I think the movie is tinged with that. That reality bleeds through the movie: you feel it’s authentic.

Q: What’s the most poetic license you took?

I think the sweep of the story and the characters are very much from the book. But it didn’t all happen to him. It’s weird because when Simon Carr saw it, he said, “That’s it, that’s our life.” And Scott said, “But a lot of it didn’t actually happen. We invented it for the movie.” And he said, “No, but you captured the essence of what it was like.”

Q: There’s a scene at night when you’re playing with the kids and trying to scare them in the bushes, like a monster from a horror film. I know I’m not the only one who saw that and felt this is a taste of the Clive Owen we know from some of your darker dramas – someone who can be pretty scary when he wants to. I realize that every actor hates to compare and connect his roles, but do you ever wonder what an audience might import into your performance from watching other films?

A: I don’t. I can’t take that on. Obviously it’s me playing all the parts. But in the last few years it’s been pretty varied what I’ve done. And I never have a career plan.

A: Not my favorite.

FILED UNDER: Clive Owen Scott Hicks The Boys Are Back TIFF