Opening Weekend: Ryan Reynolds and Sandra Bullock try to raise their game in a Hollywood marriage of convenience 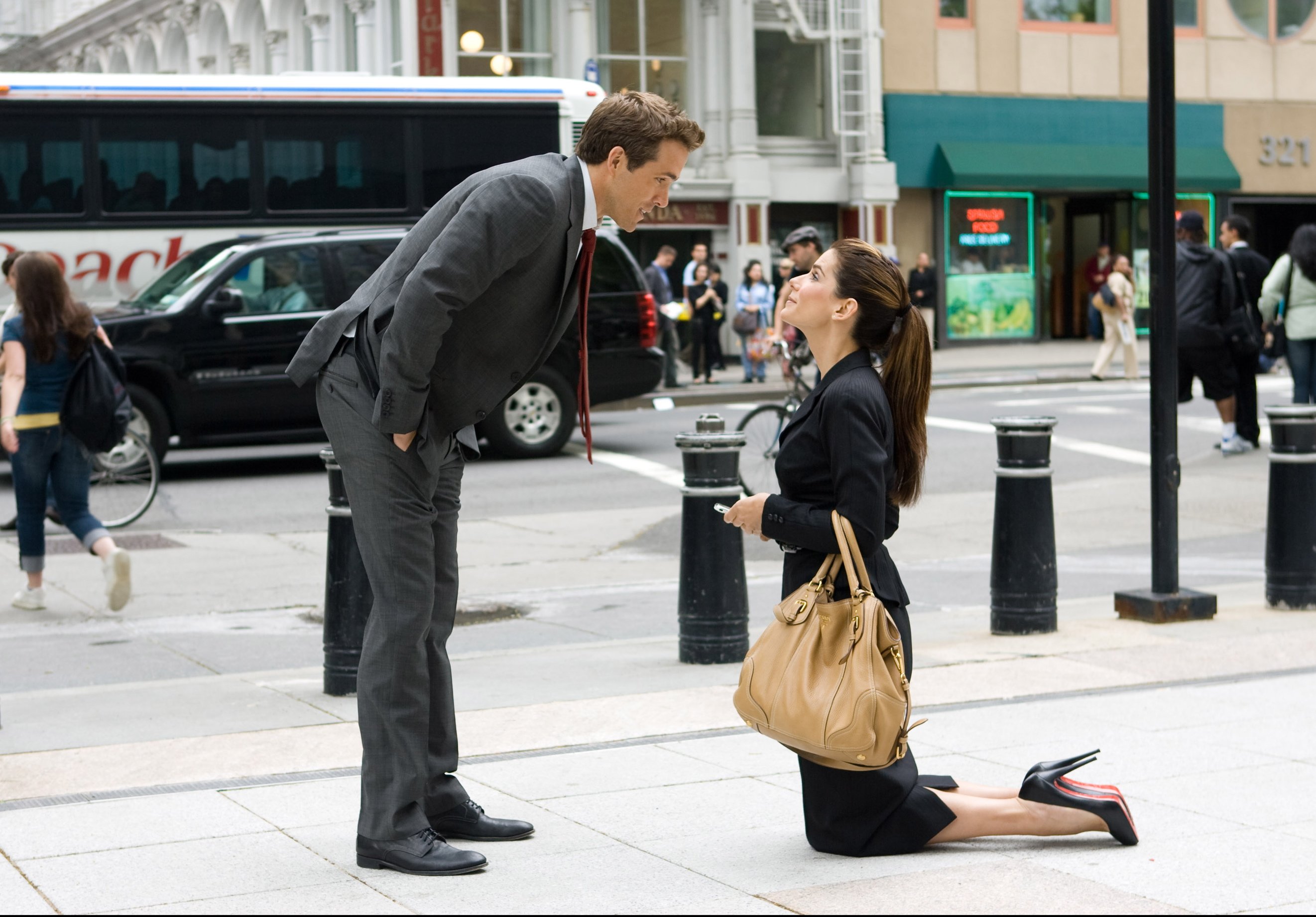 Ryan Reynolds and Sandra Bullock in 'The Proposal'

Sandra Bullock and Ryan Reynolds seem oddly cut out for each other. Both occupy the lower echelon of Hollywood’s A-list. Neither is a superstar, and both are viewed more as celebrities than as serious actors, forever stuck in the kind of mediocre studio pictures that vanish from memory long before the awards season. It’s hard to say who is the bigger star. Bullock is 12 years older than Reynolds, and at 44, she’s precariously close to the expiry date for Hollywood actresses who are not Meryl Streep. Reynolds, a Canadian famous for being Mr. Scarlett Johansson, may be in his prime, but he has the perennial posture of a young actor still looking for his big break.

Every high-concept romantic comedy is a kind of arranged marriage, not just between the characters but between the actors—a sham romance that has to turn into a real one. And no matter how derivative the formula, it requires a crucial element of novelty, something haven’t seen before. The Proposal is literally about a sham marriage, between a high-powered bitch of a book publisher named Margaret (Bullock) and her slavishly devoted executive assistant, Andrew (Reynolds). You can almost see the story writing itself on a cocktail napkin: let’s take the Meryl Streep character in The Devil Wears Prada, give her a male executive assistant, then contrive a romance that forces him to be the boss.

Margaret, a Canadian with an expired visa, suddenly finds herself facing deportation, along with the prospect of losing her job. As she gets the news, with Andrew by her side, she improvises a solution—announcing she and Andrew are engaged. Andrew, who nurtures big literary ambitions, agrees to the fake marriage on the condition that she promotes him to editor and agrees to publish his novel. Then off they go to meet his parents (Mary Steenburgen, Craig T. Nelson) in Alaska for the 90th birthday of his quirky grandmother (Betty White). There, the brittle publishing diva—toppling around in absurdly inappropriate high heels, is shocked to discover that his fiancé underling is a scion of one of the state’s most prominent dynasties. Her parents, meanwhile, are dead, which is presumably why she’s become such thick-skinned tyrant.

Well, I’m sure you can write the rest of the script from there. Reynolds and Bullock sail through it on opposite narrative arcs: he’s the spineless lackey who has to grow a pair, and she’s the castrating CEO who has to lose a pair—and find a heart. Along the way, the script flirts with some complications, principally the introduction of Andrew’s high-school sweetheart, played by Malin Akerman, but it’s an underwritten role and a wasted opportunity. The filmmakers stick topredictable, crowd-pleasing tropes, including a Something’s Gotta Give “naked” collision between the two leads, as one heads into the shower and the other comes out. From a marketing viewpoint this scene has already paid its freight, with media junket interviews treating it as breaking news. But it’s one of those bogus nude scenes, in which both actors are completely undressed yet so artfully covered up that nothing is revealed. Only Reynolds shows his chest, which is better developed than Bullock’s. But when push comes to shove, in this romcom he does have the chick role.

While we’re discussing gender, I should point out that The Proposal is directed by the rarest of Hollywood creatures, a commercially successful female director—former dancer Anne Fletcher, whose previous romcom was the deeply regrettable 27 Dresses. Like that movie, this one seems explicitly designed to set feminism back 30 years. But in spite of all that, I found myself enjoying The Proposal more than I felt I should, chuckling at the predicaments and feeling the odd unsolicited tear moisten my eyes as if on cue in the third act. Formula romantic comedies can do that to me; I’m a sucker for them, and the worse they are the more they seem to get to me. But in this case, I also think I was responding to the actors. Bullock and Reynolds both rise above the material to find some sweet chemistry amid the cliché. You feel they both deserve better than this, but they gamely make the best of their lot, like a couple salvaging a bad marriage for the sake of the children. And on top of that, the casting offers a cute irony in the reversal of national stereotypes: although Reynolds is Canadian, he plays a nice-guy American, while Bullock plays a ruthless, career-mad Canuck. I suppose by putting his character’s home in Alaska, that makes him Canadian-ish, but you wouldn’t want to push this cultural analysis too far.