A tale of two Alberta rallies 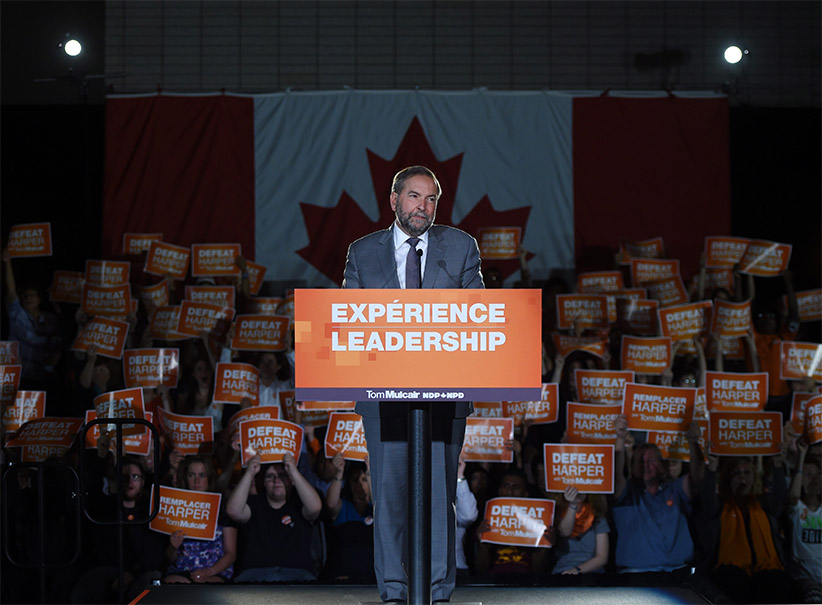 To give Tom Mulcair’s rally speech that little extra contemporary zing on Thursday night, his speechwriters sprinkled in a quip about the Conservative leader’s whereabouts.

“I noticed Stephen Harper was in Prince Edward Island today. Apparently he was looking for Mike Duffy’s residence,” he told the Edmonton crowd. His speech then segued into a twin punch against Conservative scandals and, that oldie but goodie, the Liberal sponsorship scandal.

The NDP messaging crew didn’t feed their leader any additional lines on anything at all specific to Edmonton or the region at the epicentre of so many major election issues, save Mulcair’s “Hello Cleveland!” greeting at the beginning and a reference to the enormous needs of cities. The province was not named once.

The local hero who sparked the federal party’s ascendance in the polls, Premier Rachel Notley, wasn’t among the 1,500 New Democrats that organizers said were at the rally. In his first campaign visit to Alberta, Notley’s federal counterpart made no mention in 23 teleprompted minutes of the provincial shocker that put the term “NDP government” on so many Canadian tongues. That was left to the opening acts: the federal candidates and provincial Health Minister Sarah Hoffman. “Tom’s message is resonating: trust me, I know an orange wave when I see it,” Hoffman said.

Longtime New Democrats exclaimed they can’t remember this level of enthusiasm or anticipation for their party, an opportunity for a breakthrough in a city where they’ve never elected more than one MP. Though, they might need to dial up this orange wave farther, because the red surge is showing much strength of its own.

The Liberals haven’t won a federal seat in Alberta’s capital since 2004 and Notley’s team obliterated the provincial party, but Justin Trudeau’s frequent visits and efforts to restore the Grit brand in Alberta have helped.

Mulcair’s “Rally for Change” and Trudeau’s “Rally for Real Change” the previous night showed parties closely matched in this city. The NDP claimed 1,500 or more attendees and the Liberals 1,200 to 1,450. (I’m not going to attempt to question either figure: the Liberal event was a sweaty, packed partial ballroom with no chairs, and the NDP put out nowhere near enough chairs in their curtained-off half of a convention hall, in each case with plenty of placard-waving folks positioned behind the leader’s podium and in front of the jumbo Canadian flag.) Both factions came in yelly, cheery and hungry for change. Both sides swarmed their leaders for more than 10 minutes of selfies and handshakes after the speech was done.

Trudeau didn’t do a lot of localizing of his 13-minute speech either, though he did make a vague promise to fund Edmonton’s southeast light rail line, and lightly suggested a different flavour of change in Alberta. “I think it’s obvious Albertans are looking for change but what they are looking for is not just any kind of a change. They’re looking for a change that’s going to give them a strong economy, a real and fair chance to succeed, and growth that they haven’t seen in 10 years under Stephen Harper,” Trudeau said, and then launched into attacks on Mulcair’s balanced budget plan.

With all the time spent rehashing attack lines on each other’s positions, both party leaders utterly blew an opportunity to tie their messages about the economy in the province most clearly in the throes of a recession and widespread employment worries. And if they wanted to explain their stances on oil pipelines or climate change, you’d think this would be the place. But this was decided as no time to talk about issues, especially not ones that may form regional wedges.

Notley has said that she’ll largely stay out of the election fray but will perhaps attend a rally. This could be a valuable card the NDP plays in the campaign’s second half. But Mulcair can’t grip too tightly to her coattails, supporters say. The new government is struggling with messy provincial books it inherited and sinking oil prices, dampening the euphoria from the spring. “The realities of government may be wearing on their shoulders, the MLAs. But the volunteers and supporters are still pumped,” one senior Alberta New Democrat said.

Also, love for Rachel doesn’t translate neatly into love for Tom, said Bev Nilsen, who was an NDP office manager in the days the premier’s late father, Grant Notley, led the party. She hears many Edmontonians looking for change, but there’s no clear direction yet. “I’m not entirely sure, to tell you the truth, but it’s certainly a move away from Stephen Harper.

Karen Liebovici, the Liberal candidate in Edmonton West, suggests a way the Alberta NDP win helps her party’s cause for uncertain voters. “They want checks and balances on the provincial government,” she said. Nilsen has heard that same line of thinking, though she notes that Albertans have always been happy to vote Conservatives federally and do the same provincially.

The Tories are still in position to win an overwhelming share of seats in Alberta, with the ThreeHundredEight poll aggregator putting their support at 48.6 per cent. But the Conservatives never got less than half the province’s votes in all Harper’s elections, in the Alliance or Reform days, and going back all the way in Torydom to the Pearson era in the 1960s. They could lose several urban seats, beyond the Edmonton–Strathcona seat the NDP’s Linda Duncan already holds and should easily retain. Cabinet ministers from Calgary and Ontario came to lend doorknocking support in several Edmonton ridings last week, in a city where support is seldom necessary. But the Tories will also get support from vote splits, if the Liberals and NDP both remain competitive in vulnerable ridings like Edmonton–Centre and Edmonton–Mill Woods.

The NDP still likely have the edge against Trudeau in Edmonton, where non-party sources say orange is strong in unpublished polls, and where the provincial NDP won by overwhelming pluralities in every riding. Mulcair stuck with his familiar stump speech, saying that more and more Canadians plan to vote NDP for the first time. The trick now is to get enough Albertans to do it a second time.