Film reviews of 'Adventureland' and 'Fanboys' 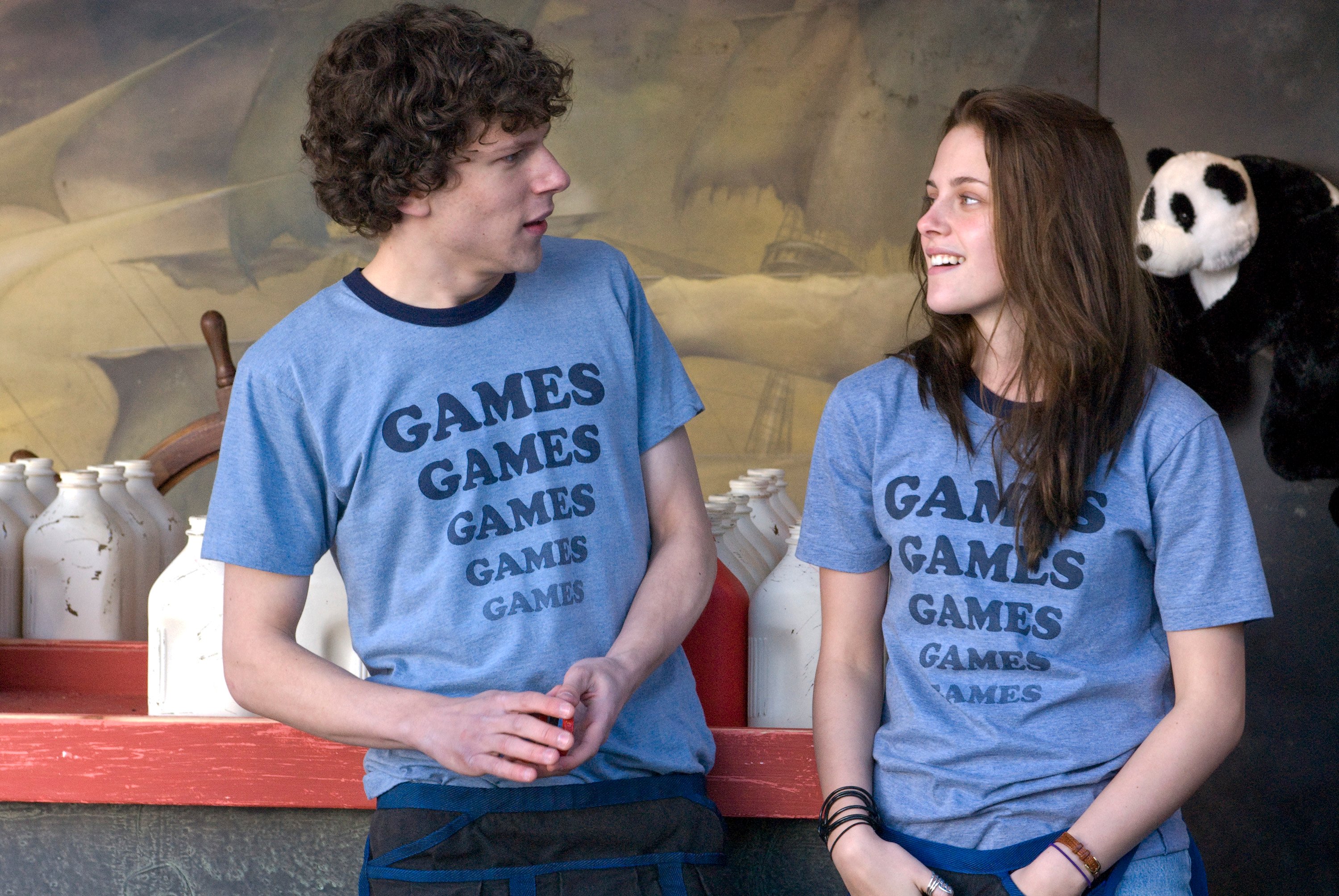 If you’re not craving a fix of fuel-injected testosterone this weekend—and can resist the lure of Vin Diesel, Paul Walker and Michelle Rodriguez re-igniting the Fast and Furious franchise—you can choose between two decidedly less macho alternatives that tap an altogether different vein of nostalgia. Adventureland and Fanboys are both are geek coming-of-age stories set in a pre-9/11 world. And the one I’m recommending, heartily, is Adventureland, a delightful romantic comedy about a shy college grad who puts his virginity on the line while working as a carnie in the summer of 1987. Fanboys is more sophmoric fare—a cute but underwhelming road movie, featuring a whole posse of geeks on a quixotic mission to invade George Lucas’s Skywalker Ranch in 1998.

This sweet midway ride through the ageless carnival of post-teen angst comes from filmmaker Greg Motolla, who directed the priceless high school hijinks of Superbad. While still blessed with a healthy measure of adolescent naïveté, Adventureland is Motolla’s own script and it’s more mature piece of work, a romantic comedy that’s tilted toward romance. It’s a smart, believable and genuinely touching movie—the tale of a young man staring into the chasm that lies between him and adulthood. And it’s one of those rare films that lives up to the gold standard set by The Graduate over four decades ago. Motolla’s script is semi-autobiographical, and it shows. He conjures a world, both physical and emotional, with the kind of telling details that cannot be made up. Balancing rough-edged realism with tender sentiment, it rides the rom com formula without succumbing to it.

The story concerns an over-educated college grad named James (The Squid and the Whale‘s Jesse Eisenberg), whose plan to spend the summer traveling through Europe is scuttled after his father gets downsized during the economic downturn of the ’80s. Forced to work, James runs a gauntlet of failed job applications before finally settling for dubious employment at a B-grade carnival. He wants to work the rides, but the carnival’s mom-and-pop proprietors (SNL‘s Bill Hader and Kristin Wiig) take one look at this scrawny geek and decide he’s a “games guy.” Showing James the ropes is a jaded young carnie (Joel Schiffman), a pipe-smoking lover of Russian literature who’s even more of a geek than he is. He demonstrates how the midway games are, of course, all fixed, and the most important rule of thumb is: “No one ever wins a giant-assed panda.” But his real role is to serve as the leading boy’s super-geek buddy and counsellor. And the real games on this midway involve love and sex.

At 22, our hero is still a virgin because he clings to the chivalrous notion that love should be a pre-requisite for sex. And the combination falls into place with a carnie named Em, a girl who is immeasurably cooler and more experienced than he is, even though she’s portrayed by a younger actor, 17-year-old Kristen Stewart (Twilight). Em has not only been around the block; she’s carrying on an affair with a married rocker/poseur (Ryan Reynolds) and hating herself for it. He’s vulnerable and toying with bravado; she’s damaged and toying with vulnerability. And the movie lets us get lost in their slow-burn romance, which unfolds as a juicy intrigue of false starts and misunderstandings.

Stewart and Eisenberg make a dynamic couple, not unlike Michael Cera and Kat Dennings in Nick and Nora’s Infinite Playlist. The set-up is similar: he’s a skinny, sensitive nerd who gets by on nervous, self-deprecating charm; she’s the obscure object of desire, a complicated girl with a whiff of the femme fatale but secretly longing to surrender to honest, ordinary affection. Like Cera’s Nick, Eisenberg’s character is a music weenie who makes a playlist of heartbreak songs, although this is the ’80s so we’re dealing in mix tapes not playlists—”I made you a tape of my favorite bummer songs,” James tells Em. And despite the fact that this is the ’80s, his favorite artist is the incomparably cool Lou Reed, whose music becomes such a persistant conceit that we half expect him to pop up at the end.

There are aspects of Adventureland that venture into stock parody, notably the couple played as a sketch comedy bit by SNL‘s Hader and Wiig. And Reynolds is characteristically wooden in his typecast role as the film’s square-jawed macho phony. But even those characters have some human warmth to them. And heart of the story feels utterly authentic. You watch the awkward romance and think: “Yes, I’ve been there—this is exactly how a new relationship works. And aside from the details of the carnival, which seems more like a location than a set, the predicament of these twentysomething characters trying to stare down the future rings true. It’s the opposite of the Hollywood dream that you never let go.In this case the big, gaudy ambition turn out to be empty and pointless. A bright future means getting a shitty job in glorious strangeness of a big new city, and hurtling into the unknown with nothing to go on but the girl you met one summer at the midway. 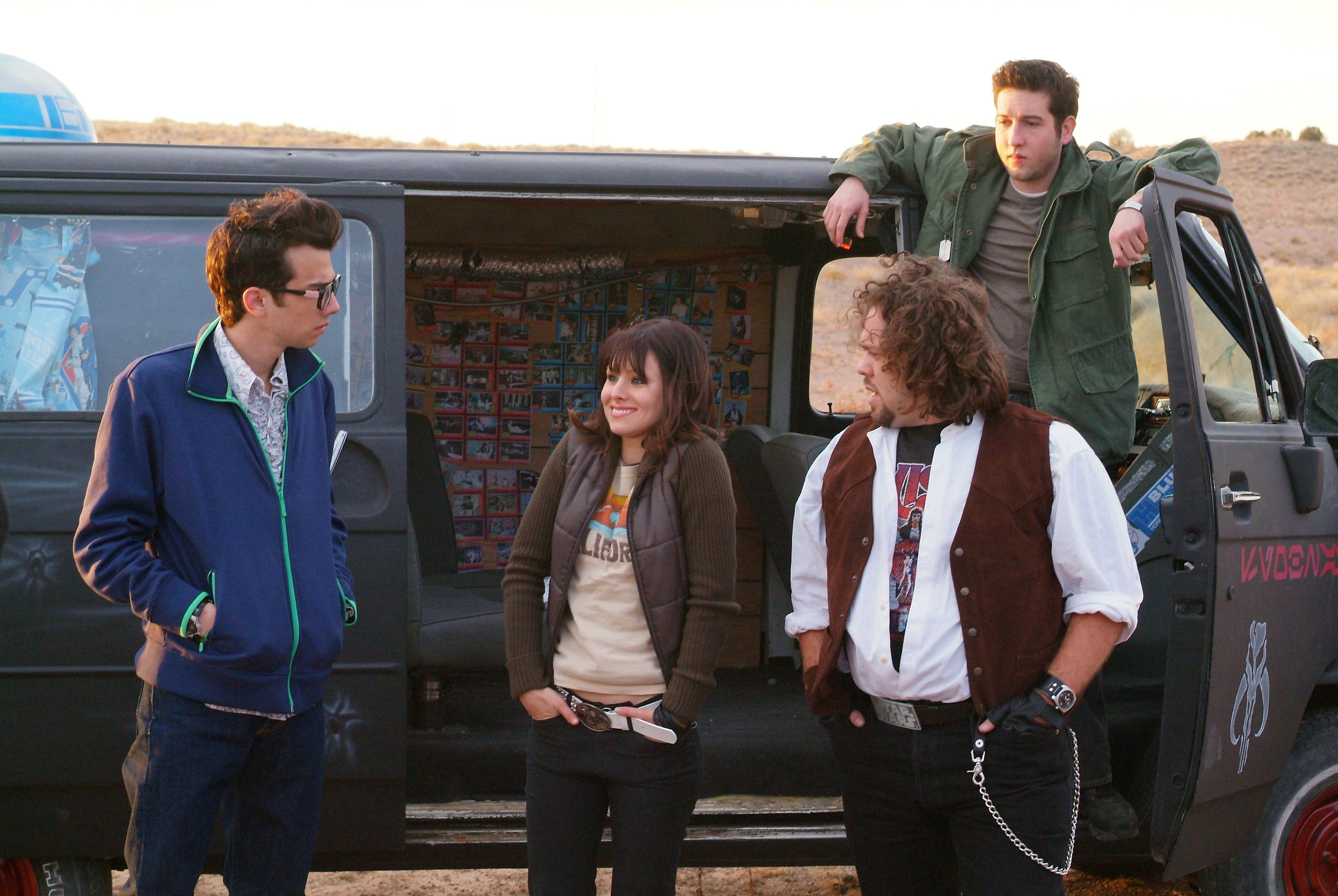 This self-satirizing romp is like a frisky young puppy that won’t stop licking your face. It’s hard not like it, but the charm wears thin. Here we’re still in the pre-9/11 age of innocence, this time in 1998, when for a certain generation nothing on the face of the earth was more exciting than the imminent arrival of a new Star Wars movie. For this generation, the original Star Wars was an event of near Biblical proportions, which I’ve always found a bit baffling. I know lots of film fans, some of them really smart film fans, who talk about Star Wars as a cinematic event that’s like their generation’s equivalent to the French New Wave. Fanboys seems to be made precisely for them . . . for fanboys. Sure, it has the humility to knowingly spoof its own absurd obsession, but in the end soft romance outweighs the satire, which lacks bite. This is Spinal Tap nailed pop culture delusion with the perfect combo of devoted authenticity and savage parody—a knife-edge balance that eludes the creators of Fanboys.

Making his feature debut, Kyle Newman directs four amiable young actor dudes (Jay Baruchel, Dan Fogler, Chris Marquette and Sam Huntington) as a crew of Star Wars geeks living out their final fantasy. Living up to a teenage oath, these overgrown adolescents embark on one last juvenile fling before surrendering to the pall of adulthood—they drive van across the country to break into George Lucas’s Skywalker Ranch and steal a print of Star Wars: Episode One—The Phantom Menace so they can be the first to see it. Along for the ride is the requisite chick-with-the-band, played by Kristen Bell, who’s like a young Parker Posey is way sexier than any girl with this group of losers has a right to be.

All the actors give game performances, and there are plenty of amusing moments along the road to keep us from asking, “Are we there yet?”—mostly involving the insane rivalry between Star Wars and Star Trek fans. There’s a clash with a costumed clan of Star Trek fanatics, who are portrayed as stuck-up squares; theres a run-in with a Las Vegas trekkie played by Seth Rogen, and Cap’n Kirk Himself, William Shatner, turns in a cute cameo. But an attempt to lend a sense of grave dramatic purpose to this silly quest—Marquette’s character is dying of cancer—undermines the whole comic enterprise. And by the time we get to George’s ranch, the momentum is lost. Strangely Lucas himself, the one cameo we were expecting, never materializes, which only adds to the nagging sense of failure surrounding the movie’s narrative mission.

Even further weakening the satirical heft of Fanboys is a statement that the director issued in advance of this weekend’s release. It seems there are not enough fanboys to go around, so he want to make sure he has both the Star Wars geeks and the Trekkies in his own fan base. Kyle Newman:

I am a Trekkie/(Trekker). I’ve seen all of the films and am a huge fan of the original and Next Generation series. I was even a member of Starfleet growing up and loved watching the Star Trek marathons on TV. I collect the old Gold Key comics too. And I am immensely excited for JJ Abrams’ new Trek. The cast that he’s assembled is incredible! Zachary Quinto is a friend and I am so excited that he is playing Spock!
Trekkie’s should see FANBOYS because there is more William Shatner in our film than the new Star Trek movie!!! The man’s a legend and it was honor for him to grace our set. And Seth Rogen plays the world’s biggest Trekker. You can’t go wrong there. He’s also a fellow Trekker in real life along with cast mate Jay Baruchel. It’s good clean Sci-Fi franchise banter.

Good clean sci-fi banter? With hype like that, who needs criticism?