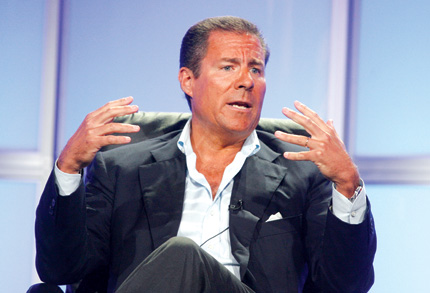 Yesterday I got to ask a few questions of Richard Plepler, the co-president of HBO, and one of the questions was about so-called “vertical integration”: networks owning the shows they put on the air. Some of HBO’s key shows in the past, like Larry Sanders, were produced by outside companies. Now they are almost 100% in the business of airing shows they produce themselves. As you might expect, Plepler says this is an entirely intentional business strategy:

It’s a very conscious decision. We want to own our stuff, because if we own it, we have the opportunity to exploit the many different opportunities for sales — syndication, international, DVD — that we have. And obviously, we can net down the cost of those shows by doing that. It allows us much more flexibility in re-investing in our programming line. So we want to own most of what we make.

HBO has probably been the most aggressive network in pursuing this strategy of producing everything in-house, though Showtime seems to have adopted the same policy (but with less of a payoff artistically). Basic cable networks are more likely to buy a show from an outside company: USA (Universal) gets Burn Notice from Fox, FX (Fox) has some Sony product. AMC, of course, demonstrated the hazards of not owning its own shows when it got caught in the middle of a dispute between Matt Weiner and Lionsgate (the studio) over Mad Men. But HBO’s model is based on an idea that’s almost like an old-school studio system throwback: if you want to work for them, you work for them, meaning you produce a show for their company. A creator who has a contract with Sony or Fox will not usually be making shows to air on HBO; he or she actually has to sign a contract with HBO. The creator gets to make the show he or she can’t sell to the broadcast networks, and HBO gets to look into all possible ways of making money off the product, rather than letting another studio take the money.

This is the point where I would normally go down the list of new hits and see which ones are produced in-house and which are produced by outside studios. But of course, there are so few hits out there that there’s no way to make any kind of generalization. It does seem to me, as it did last year, that networks can depend on in-house production for hour-long shows much more than for half-hours. CBS produces several successful dramas in-house, but almost all its comedies are from Warner Brothers or Fox; ABC has Modern Family from Fox. Comedy is more unpredictable than drama, so I suppose no network could put together a passable comedy lineup by choosing only from one company’s comedy pilots. That might well be why HBO hasn’t really had a successful out-and-out situation comedy since they decided to stop going outside, the way they went to Sony for Larry Sanders.