Look, I’m not here to tell you your business. You’re the deranged despot. But a few tips . . . 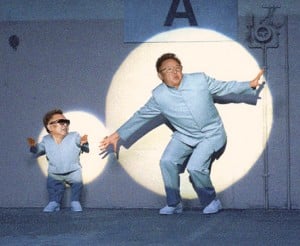 What’s beyond debate is that after almost three years of laying low, Kim Jong Il—the dictator best known as Dear Leader, the Sun of the 21st Century and, briefly during a 2004 Vegas jaunt, Mr. Britney Spears—is back. None of us is certain why this real-life Bond villain vanished (maybe he went backpacking around Europe to find himself and/or some weaponized plutonium?), but the Eternal President has re-emerged with his drive, his evil cackle and his megalomania intact.

Like all self-respecting movie villains, Kim Jong Il has returned to the limelight with a completely different scheme for world domination. Back in 2006, he set off a couple of nuclear blasts—an audacious bid for regional supremacy that petered out when military analysts mocked the size of his . . . uh . . . weapon—calling it “tiny,” “pretty small” and “insignificant.” (Ease up! He may be an authoritarian nutbar, but that doesn’t mean he’s not sensitive about it.)

But now it’s all about scaring the remaining supply of bejesus out of Americans. By launching a satellite into orbit, Dear Leader figured he could prove beyond a doubt that a North Korean missile could reach Alaska or even one of the “good” U.S. states. Then Kim Jong Il would be feared! They’d all fear Kim Jong Il!! [Evil cackle, deep evil breath, more evil cackle . . .]

Sure, his country might not yet officially have The Bomb. In fact, North Korea’s infrastructure is so primitive and fragile that on many nights it doesn’t even have The Electricity. But despite all that—and despite being bombarded with wave after wave of 500-lb. adjectives from diplomats and world leaders—Kim Jong Il remains defiant. And also probably insane.

Then again, maybe he’s insane like a mentally ill fox. After all, he set off those nuclear explosions three years ago and the sum of his punishment was a) the threat of sanctions (the UN’s version of a two-week grounding), and b) people in nice suits calling him a bad man. Who can forget Condoleezza Rice vowing that giving up its nuclear program would “lead to all kinds of benefits” for North Korea? She then winked and lifted her skirt slightly.

There’s not much difference this time around. By way of illustration, let’s think of the world as a family driving in a car. North Korea is one of the kids in the back seat.

Essentially, what most of the U.N. Security Council—or “Dad”—is saying is: “Do not make me turn this multilateral international organization around or I swear I will hit you with the terms of a revised draft resolution pursuant to Article 41.” And that kinda freaked North Korea out for a minute. But then Mommy China turned around and mouthed the words, “Don’t worry sweetums,” and winked, and a relieved North Korea immediately whacked Japan over the head with a Dinky car.

My point is this: being UN secretary-general has got to be the second-most impossible job on earth, right behind serving as the good angel whispering in Dick Cheney’s ear.

First—and this is from a strictly practical standpoint—if you’re going to annihilate humanity, would you mind doing it before that new Zac Efron movie opens next weekend? Because, honestly, from the looks of it you’d be doing us a favour.

Second, uh, how do I put this? I’m not here to tell you your business. You’re the deranged power-mad despot. But I think there are a number of lessons to be learned from the failure of your Taepodong-2 missile launch. One lesson you might want to learn is that if the goal is to generate fear in America, you probably should not include in the name of your missile the word “dong.” That kind of thinking didn’t work for China and the Wang 5 rocket. And don’t even bring up Cuba’s ill-fated pene minúsculo II. Renaming your missiles might not extend their range, but it would result in an 83 per cent decrease in giggle fits in the White House situation room.

Third and most important: keep at it. In an age of economic crisis and terrorism-based anxiety, the world needs your kind of oversized ambition and cartoonish futility. Aim higher, Kim Jong Il! Carve a secret lair into a volcano. Build a robot military base on the moon. Put lasers on sharks. We’ll be watching, because your sequels keep getting better and better.