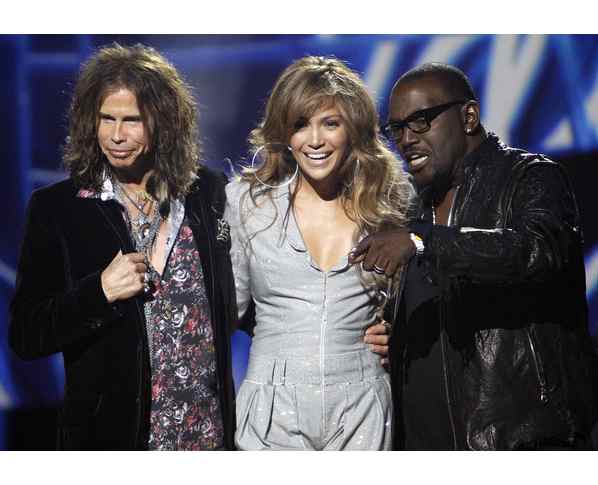 Fox’s midseason schedule is, as usual, incomprehensible without a secret decoder ring, but it’s a pretty smart schedule all the same. The big move is American Idol, which moves to Wednesday/Thursday. No one knows how much Idol will drop without Simon Cowell, but if it does drop more than expected, then at least the network won’t have killed Glee‘s momentum by moving it in the middle of its emergence as a breakout hit, just for the sake of giving it a post-Idol slot that it no longer needs. And the competition at 8 o’clock on Thursdays isn’t that tough (there’s only one hit show between the other three networks) meaning Idol won’t have as much standing in the way of its continued dominance.

In general, I think Fox’s choices seem like smart ones; like CBS they seem to understand that aggressive scheduling moves can be effective in a psychological sort of way. They’ve shifted the talk from “how much will Idol decline with J-Lo and Steven?” to “how afraid should NBC and ABC and CBS be of Idol on Thursdays?” This movie may not gain Idol so much as a single ratings point, but it makes the network’s midseason position feel stronger, if only because people will be talking about their strengths (Idol, Glee) more than their weaknesses. In other words, if they’d left the show on the same nights, then the only change worth talking about would be the change in judges, and much of the talk would be negative. Now there’s something else to talk about, and it changes nothing about the show or who the judges are, but at least it’s positive (Idol will be a juggernaut that other networks must fear on Thursdays) rather than negative.

As for the competition, the big hit shows (like Modern Family and Big Bang Theory and Grey’s Anatomy) are in no danger even if they go down a bit or even a lot. So the real question is what this means for the “bubble” shows, particularly Community. (Also Vampire Diaries, but I never really know what the CW’s ratings expectations are, and I fear that if I tried to find out, I’d start becoming obsessed with demographics and stuff.) NBC was already hurting Community enough by putting it at 8 — it did a bit better the one time it aired at 8:30 — so if they want it to survive they may need to find a new spot for it. But really, they’ve got so many holes to fill that shifting everything around again may not be an option; all six of the comedies on Thursday will have legitimate complaints about their time slots, and I guess that could be a plus for them because no one will know for sure how much of the blame goes to the shows or their time slots. The Office will be fine for now, of course, and the network’s best bet may be to really milk the Carell departure for as much as it’s worth — plug the hell out of not only the departure episode but the big moments leading up to it, and encourage the writers to play up that angle as much as they can. That could at least help Parks and Recreation do well enough to hang on to next season as it deserves.

Over on ABC, this is the big test for their comedy lineup, particularly The Middle at 8, which has become the definition of a solid show that performs solidly every week (and, better still, is actually good; it’s probably my favourite of their four comedies). Obviously the network is hoping — assuming it stays where it is — that it can continue to perform at somewhere near its current level, which would make it clear that they have two really solid comedy tentpoles (Middle and Modern Family) to launch future shows.

Fringe will go to Fridays, which is not a good sign but is also unavoidable: it’s not compatible with Idol‘s audience and it’s not doing well enough to go anywhere else. It’s odd that Fox has had so much trouble launching science-fiction shows — they all seem to wind up on Fridays now, either in the beginning or the end — when The X-Files was one of their biggest successes. But The X-Files, despite the mythology aspect, had self-contained episodes as a major part of its style. Fringe was at its most popular in the first season when it was trying to be like The X-Files, an episodic show with a larger mystery arc, but the creators’ hearts weren’t in it and neither were their biggest fans’. As the show has moved toward being an impenetrable mythology show, it’s gotten better (though sometimes when I hear lines about “the Senator was a shapeshifter” I start to realize how ridiculous it must sound to a new viewer) but it also probably lost its chance to be the new X-Files.

Among the new shows, the only one of particular interest is The Chicago Code, formerly called Ride-along, the new cop show from Shield creator (and Terriers showrunner) Shawn Ryan. Ryan’s work is never less than interesting. This is another show with title issues, as the network changed the title to emphasize the location. Some have argued that the new title sounds too generic; I personally thought the old title made it sound like a Western. But since I’ve argued before that the choice of title doesn’t make or break a show, I’m not going to worry about it. Seeing a show filmed in Chicago is always something to look forward to (like Detroit 1-8-7, a slightly unfamiliar location can give a jolt to what might otherwise be a standard cop show — and if the show isn’t a standard show, then taking it outside of New York or L.A. can produce really spectacular results, as with Homicide and The Wire).

The other show that might deserve some comment is Bob’s Burgers, the latest attempt to add an animated show that isn’t from the Seth MacFarlane family. I don’t think animation and scriptwriters don’t mix, the way John Kricfalusi does. But it is true that the most successful prime-time animated shows have been from people who could create and draw the characters, making the drawing style a genuine extension of the writing style. This is what Matt Groening, Mike Judge and Seth MacFarlane — not to mention Hanna-Barbera — have done. When a writer writes a script and then hands it over to someone else to design all the characters, it can wind up feeling as though the quirky or stylized drawing doesn’t have a clear connection to the writing, a reason why the show absolutely has to look that way.

Update/Correction: The above paragraph is rendered inoperative by the fact that the creator of Bob’s Burgers is Loren Bouchard (Home Movies), with Dauterive on board in the traditional way — an experienced network TV writer to help guide the show. The material I was working from indicated Dauterive as the creator; the material was wrong. (Which teaches me this lesson: Double-check on Wikipedia first. They never have inaccurate information.) In any case, the point about the importance of having the look and the writing come from the same mind still stands; it’s just that this is an example of how Fox still understands the importance of it, rather than the other way round.