an open letter to this guy's underpants 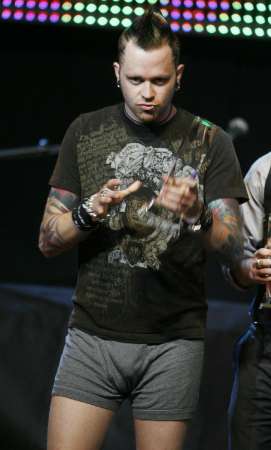 Go. Go now. For your kind is not welcome here.

You are but a lowly pair of men’s boxer-type briefs, available in packs of three at department stores. Your fabric is commonplace. Your design is mundane. You are not worthy to shield this rock musician’s dangly parts from public view.

Perhaps Mike Rodden was drunk or high or a bass player (the hair suggests a combination thereof). The point is this, underpants: your very existence is an insult to the grand tradition of crotch-based rock attire.

You are not made of leather.

You are not made of spandex.

You are neither provocatively encrusted with sequins and rhinestones nor tailored in such a fashion as to be largely assless. Thigh sweat will not accumulate in you.

You are a simple poly-cotton blend, grey in colour, drab in manner. You were not made for the stage. Your place is around the pelvis of the common man and our butchier ladies.

Go then, charmless Stanfields-style underpants. Be gone with you.

Also, this photo suggests it’s apparently impossible to stuff you to make your “contents” look bigger – which is a deal-breaker, frankly. Even the mighty gods of rock can use a little help down there.