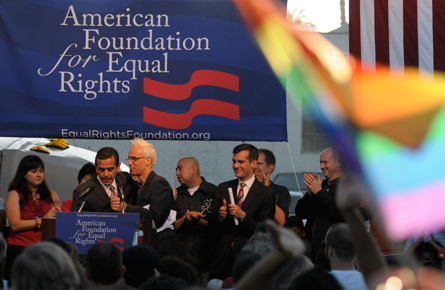 Yesterday afternoon a federal court struck down California Proposition 8, the successful ballot initiative that had banned same-sex marriages in the state. U.S. District Chief Judge Vaughn Walker’s Perry v. Schwarzenegger decision offers a fascinating overview of the American SSM fight. Subjecting Prop 8 to the strict and searching scrutiny that any overt act of state discrimination invites, Walker found the evidence of social harm resulting from gay marriage to be wretchedly meagre, and the evidence of any additional administrative burden on the state to be worse than nonexistent. (In a display of perversity surely more nauseating to many of us than mere sodomy, debt-addled California has been foregoing revenue from marriage licenses issued to same-sex couples and has been maintaining a distinct bureaucracy for the creation and oversight of “domestic partnerships”—a species invented in order to endow gays and lesbians with all the legal difficulties of civil marriage without entitling them to drink from the dregs of its social dignity.)

Walker, having entertained and weighed the evidence of a rational basis for Proposition 8, could find none—none beyond discrimination against gays and lesbians for its own sake, which he characterizes as a “private moral view” that, in the absence of a legitimate government interest, cannot be an appropriate subject of legislation under the due process and equal-protection provisions of the Constitution. So runs the argument. (I’m not a lawyer, but it feels to me like a rather Canadian, Oakes-y one, structurally.)

How airtight is the ruling? One objection that someone like Supreme Court Justice Antonin Scalia would make—for he has made it—is that all laws implement some “moral view”, and could be struck down by a judge the minute some protectable class were found to object to it. Laws against homicide discriminate against murderphiles, and so on. Of course, this isn’t very convincing. Even if you can show that there is such an inherent characteristic as “being a murderphile” and that people in no way choose membership in this class—which, in fact, is an argument you could probably win!—the compelling state interest in preventing murderphiles from murdering is a million times easier to show than anybody’s interest, anybody’s at all, in fretting over the nebulous effects of gay marriage.

This debate is over in Canada, except as a convenient way for kooks to define themselves, because how the heck could you possibly show that absolutely anybody’s life was affected irreversibly for the worse on the exact date of July 20, 2005? I’ve given pro-lifers generous helpings of hassle over the years, but they’ve at least got the “Abortion Stops A Beating Heart” thing to fall back on. If you were picking a similar slogan for the anti-SSM movement, where would you even start? Gay Marriage…Makes A Gorge Rise? Gets A Dander Up? Sticks In A Craw?

The punchline to all this is that Justice Scalia is so forthright, confident, and frankly plain ornery in his views that he inadvertently supplied Judge Walker with a grace note for his magnum opus. Back in 2003, UCLA law professor Eugene Volokh pointed out that the then-fresh Lawrence v. Texas Supreme Court decision annulling that state’s sodomy law featured a little sideshow he thought relevant to the future of the gay-marriage struggle.

In today’s Lawrence decision, Justice O’Connor refuses a general right to sexual autonomy, but concludes that banning only homosexual sodomy violates the Equal Protection Clause—there’s just no rational basis for such discrimination besides “a…desire to harm a politically unpopular group,” she says. What about gay marriage, one might ask her? She anticipates this, by suggesting that “preserving the traditional institution of marriage” is a “legitimate state interest.” “Unlike the moral disapproval of same-sex relations—the asserted state interest in this case—other reasons exist to promote the institution of marriage beyond mere moral disapproval of an excluded group.”

Justice Scalia derides this—”[Justice O’Connor’s reasoning] leaves on pretty shaky grounds state laws limiting marriage to opposite-sex couples,” because “‘preserving the traditional institution of marriage’ is just a kinder way of describing the State’s moral disapproval of same-sex couples” [emphasis in original]. But wait: Isn’t that the usual argument of those who criticize the heterosexual-only marriage rule?

In his tirade against “a Court…that has largely signed on to the so-called homosexual agenda”, Scalia gave the game away. Allergic to O’Connor’s cop-out, he argued that there was no need for hetero-only marriage to stand on any basis but “moral disapproval”—and took the extra step, regarded as dangerous by many in his camp, of denying that it could possibly have any other basis. It was an admission, a rather gay-friendly admission really, that any search for objective harms or administrative excuses with which to bash same-sex marriage would be nonsensical and futile.

And lo and behold, in the year of our Lord 2010, the Volokh prophecy has come to pass; Scalia’s grenade has landed right smack in paragraph 21 of Perry v. Schwarzenegger.

Lawrence v. Texas, 539 US 558, 604-05 (2003) (Scalia, J, dissenting): “If moral disapprobation of homosexual conduct is ‘no legitimate state interest’ for purposes of proscribing that conduct…what justification could there possibly be for denying the benefits of marriage to homosexual couples exercising “the liberty protected by the Constitution”? Surely not the encouragement of procreation, since the sterile and the elderly are allowed to marry.”