Are scientists being muzzled? A look at the record

Scientists in Canada are raising their voices about the muzzling of federal researchers. In rallies across Canada, they have spoken out about the Conservative government’s lack of research-based policy decisions and its science strategy, which they argue focuses on industry rather than fundamental research.

Maclean’s explored these concerns earlier this year in an article about the muzzling. Reading through it, I got stuck on a paragraph in which the minister of science’s spokeswoman boasted about the research published last year by federal scientists: “There have been no recent changes to the government’s communication policy for federal civil servants,” the statement said. “Government scientists and experts are readily available to share their research with the media and the public.” The missive went on to highlight the 500 studies published last year by Natural Resources Canada, and the “nearly 1,000” scientific papers from Agriculture and Agri-Food Canada.

Scientists must share research with other experts—by publishing scientific papers—in order for science to progress. They must also be able to share it publicly—through the media, as a start—to foster an informed society. Despite the claims, it has become clear that federal scientists are hindered in their ability to do either.

Less scrutinized is a decrease in peer-to-peer communication. At a recent Parliament Hill rally, one speaker noted that the federal ideological and funding shift from basic scientific inquiry to industry partnerships and commercialization corresponds to a drop in scientific publications.

The National Research Council of Canada (“Canada’s premier science and technology research organization”) has an online archive of all its publications. The past 15 years of NRC-authored peer-reviewed publications are represented on the graphic below. Though the NRC only represents a portion of publicly funded science, the data appears to provide yet more evidence that federal researchers work in a political climate that discourages the communication of science. 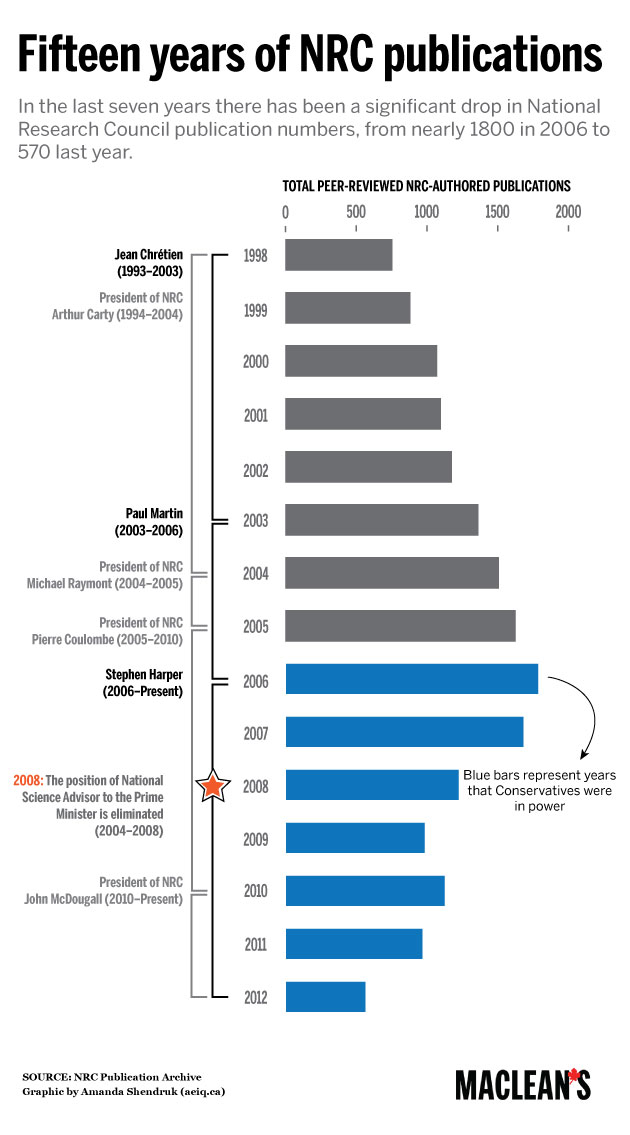 (Note: the archive depends on author submissions and is updated on a continual basis.)