At a film festival, amid the stars and the hype and lurid glare of over-sponsored glamour, you live in hope that you’ll stumble across something thrilling, inspiring and wildly original that comes right out of the blue. Last night I saw exactly that. It wasn’t a film. And it wasn’t even officially part of the Toronto International Film Festival. It was a party celebrating a Patti Smith documentary that, due to a mysterious lapse in taste, had been excluded from the festival. Generally I find there’s not enough time to attend parties during TIFF. And whenever I do, I always seem to be at the wrong party, then get anxious reading breathless reports in the newspaper about about all the fabulousness I missed at the star-studded In Style soireé. But last night I got lucky. Joe Fresh, the Loblaws designer, was hosting the party at the Gardiner Museum with a tie-in to a non-TIFF screening of Patti Smith: Dream of Life. I went because I heard that Patti Smith was going be there, but had no idea she would perform. And no matter how many close encounters of the celebrity kind I missed at TIFF, I now feel I can safely claim that I lucked into the best party of the festival. 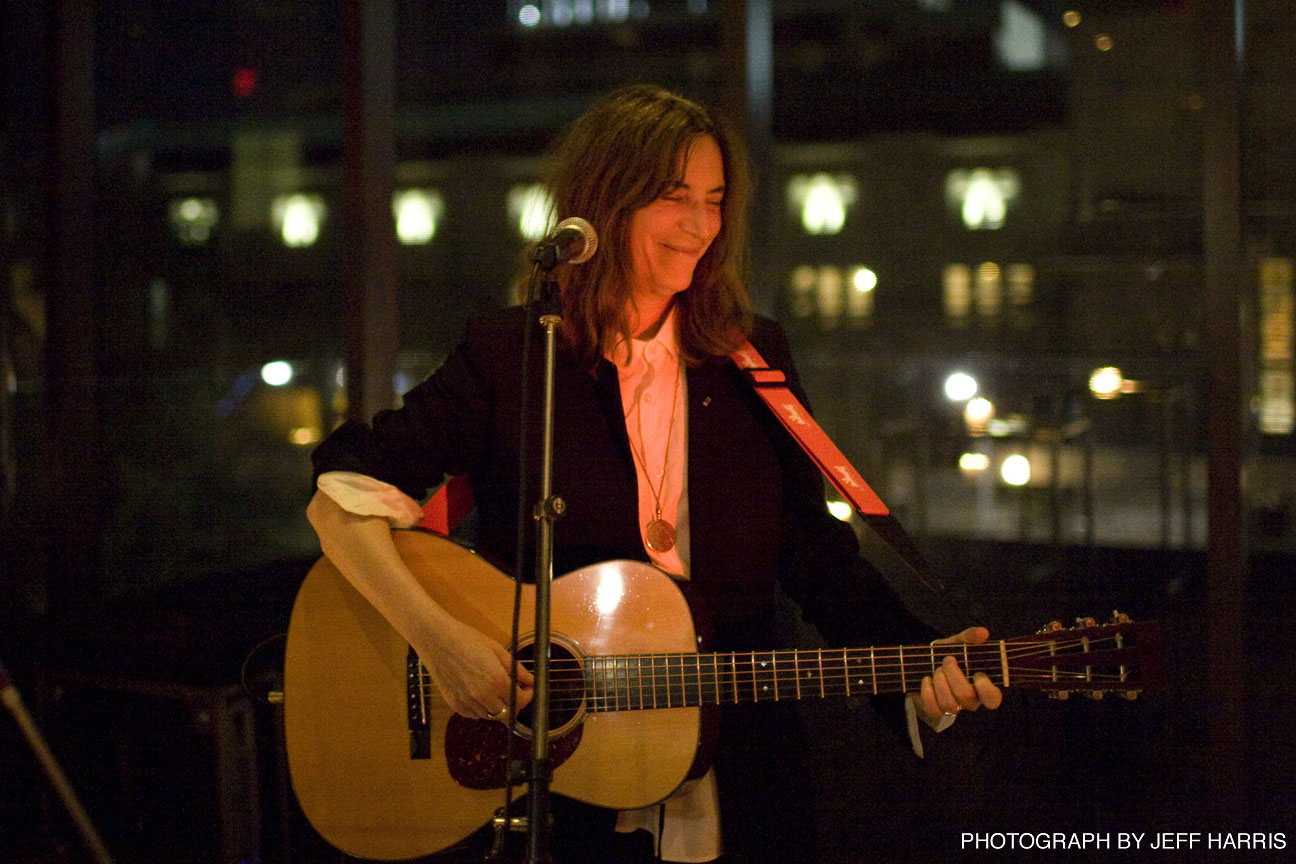 Patti Smith, who has been called the High Priestess of Punk, is one of those Rushmore figures in the history of rock, although she’s also a poet and something of a folkie. She pioneered an era when stylistic boundaries were less distinct and the only real genre was revolution. So it’s it’s hard to imagine a more unlikely venue for her to perform than the Joe Fresh party at the Gardiner. It was a tough crowd. This luxe event was packed with well-heeled fashionistas and young scenesters, many of whom probably had no idea who she was. Regardless, without introduction she stepped up to the microphone at the end of the room with an acoustic guitar and started to sing as if none of it mattered.

At first, she was barely audible above the hubbub. Soon she had two-thirds of the crowd enthralled, as she talked and played for about 45 minutes, unfazed by the dull roar of cocktail chatter that continued at the back. I watched from a banquette from about 10 feet away.

Displaying an uncanny mix of supreme confidence and casual self-deprecation (especially about her guitar-playing), she kept up an offhand patter, as if the room were just another folk club in the village. She had just driven in from Buffalo, after flying in from Russia via New York.

” I just got back from Moscow,” she told us. “I was there for about 10 days. So I am on Moscow time which means it’s about five in the morning. I’m actually in a total state of culture shock. . . I can’t imagine what culture I’m a part of—especially since I’m an American I really don’t know what culture I’m a part of.” She went on to apologize for wearing a Berlin Film Festival guitar strap, and said it’s only because she doesn’t have a Toronto Film Festival guitar stap — I’m told that TIFF programmer Noah Cowan rejected Patti Smith: Dream of Life for the 2007 festival, but it went on to play Berlin and Sundance.

As she sang, people watched via the usual pixilated surveillance of cellphone cameras. Eventually she Patti gently put an end with an oblique aside: “I think you are almost done taking pictures, because by this point Robert Mapplethorpe would have had the cover of Horses.”

She introduced The Whipperwill Song, a Hank Williams number, with an anecdote about rehearsing it with Ramblin’ Jack Elliot for Bob Dylan’s Rolling Thunder Revue in the 1970s. “I was about 25. I did get a slot on the Rolling Thunder revue, but then Joan Baez joined and there was really only room for one gal in that town.”

Every so often she broke into a hacking cough. “I’m not sick, honest,” she said, explaining she was allergic to the scented candles that filled the room. It’s a real problem, she added, when she follows bands that play heavy-metal ballads with a lot of scented smoke.

She sang about six or seven songs, including Because the Night, which she delivered acapella, asking the crowd to fill in the choruses. Gloria turned into another sing-along, although she couldn’t remember the chords, and canvassed the room for someone to play her guitar.

Remarkably, the one number that sent a hush over the entire room was The People Have the Power, although she just recited it as spoken word, and it was strangely inspiring to see this champagne-sipping, silver-lame throng fall under the spell of a hippie manifesto:

The ideal antidote to festival madness. 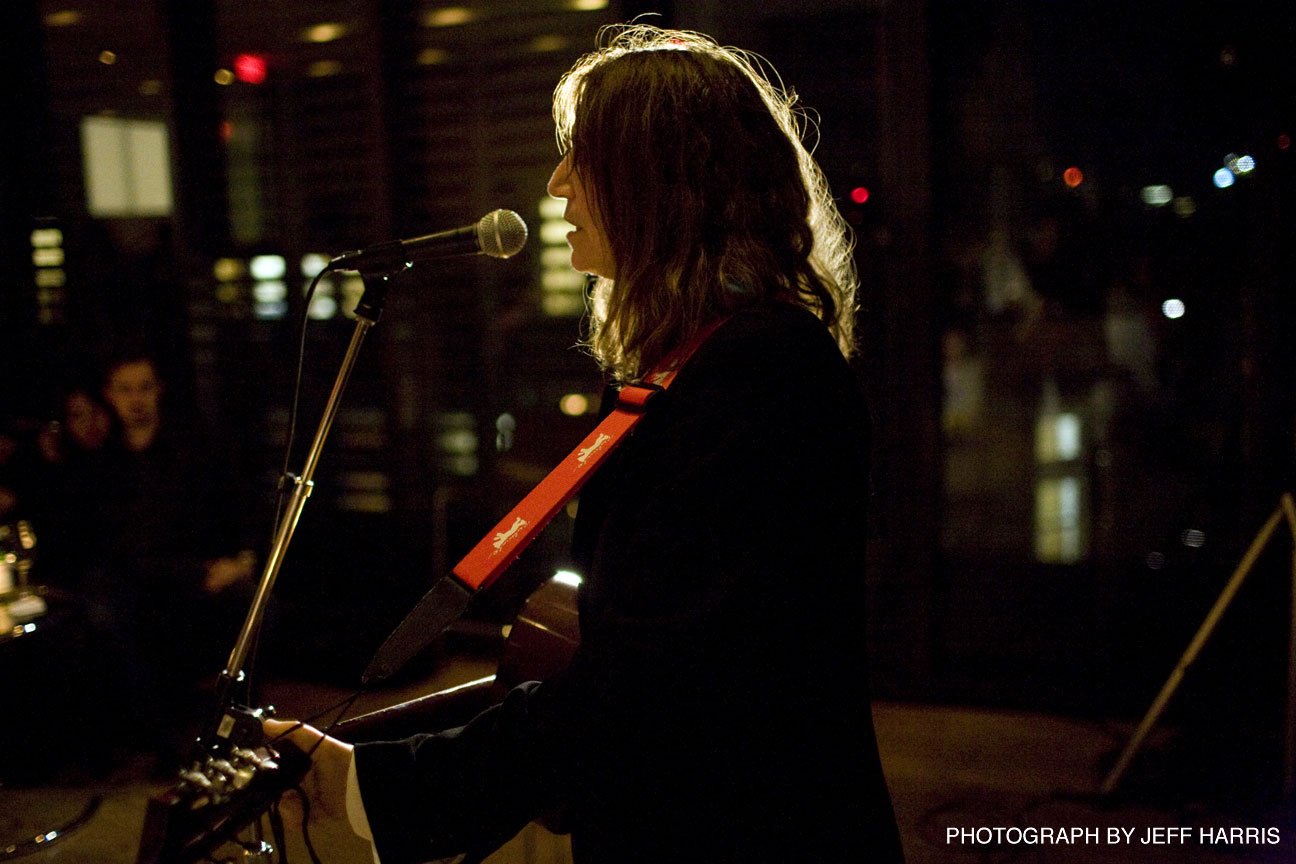