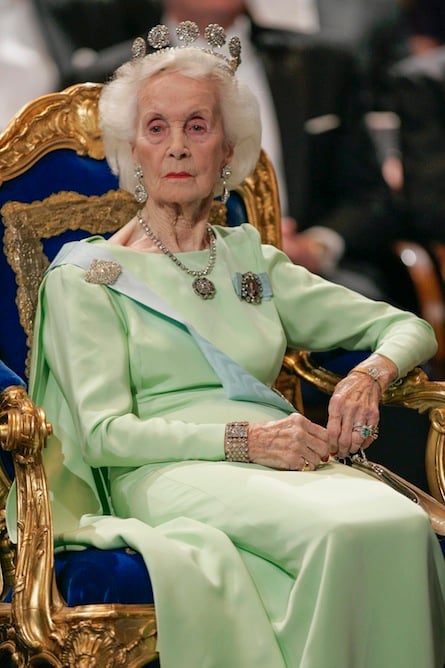 If there was ever a bittersweet royal love story it was that of Lilian and Bertil of Sweden. Born Lillian Davies in 1915, the daughter of a coalminer, the Welsh beauty dropped the second “l” from her name and set off to London for a career in showbusiness. She paid the bills through modelling and small movie roles. Then in 1943, she met the dashing Prince Bertil of Sweden. Amid the dangers of wartime London they fell in love. “He was so handsome my prince. Especially in uniform. So charming and thoughtful. And so funny. Oh how we laughed together,” Lilian recounted in her memoir. But she was married. And a commoner. Though she got a divorce, those were two obstacles that would take decades to overcome. The first problem was a dearth of eligible male princes in Sweden.  Two of his brothers had renounced their rights to the throne to marry commoners, while his eldest brother, the heir, died in a airplane crash in 1947, leaving his one-year-old son, Carl Gustaf, as the future of the Swedish monarchy. Given Carl Gustaf’s age, it was likely Bertil’s father would die before he reached his majority. So Bertil would need to be regent. And he couldn’t do that if he married Lilian. With the future of the monarchy on the line, Bertil and Lilian put aside their own desire to be married.

Instead, the two lived quietly in Sweden and France, with only a close group of friends and courtiers who knew their true relationship. Lilian was consigned to a supporting role. “I was never invited. I officially did not exist. I had to sit at home and watch my darling on TV while he went to Nobel parties and so on,” she wrote. As Carl Gustaf grew older, the secret romance became public. Though forbidden to marry by his father, King Gustaf VI Adolf, they lived in a common-law relationship until 1976, when the new king, Carl XVI Gustaf gave them permission to marry. So some 33 years after they first met, Lilian became Princess Lilian, duchess of Halland, and was welcomed at all official ceremonies. For years she’d wear a glittering amount of Bernadotte family jewels to the Nobel Prize ceremonies. After Bertil died in 1997, she cut back her duties. Finally in 2010 the family announced that she had Alzheimer’s and would be unable to attend the wedding of her grand-niece, Crown Princess Victoria.

Lilian died quietly on Sunday. She was 97.

Today flags were lowered to half-staff throughout Sweden as church bells tolled in mourning. And at the welcoming ceremony for President Abdullah Gül of Turkey, the king and his family wore mourning black. Her body will lie in state for the public to pay their respects on Friday afternoon at the palace church. She’ll be buried on Saturday.