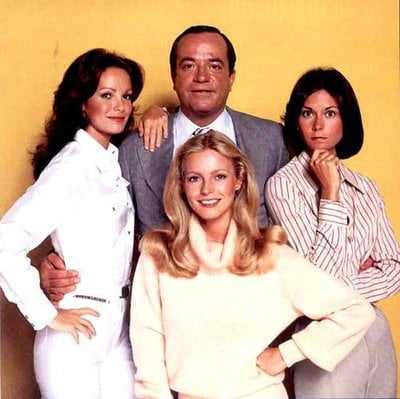 Well, no, not really, but I can’t help but wince at the fact that the new Charlie’s Angels pilot will have a young, good-looking Bosley who is described in the script’s stage directions as “a perfect specimen of 21st-century American manhood.” Why? Because for many of us — okay, me — Charlie’s Angels made the most sense if you looked at it as the tragedy of John Bosley, a schlubby-looking, scratchy-voiced man who clearly can’t get a girl under most circumstances. He’s surrounded by beautiful women whom he cannot have, and who treat him like their ugly sister. And he’s working for a guy who can apparently have any woman he wants and never has to do any actual work. Think what goes on in that man’s mind. Clearly, if Charlie’s Angels had run another season they would have revealed the big twist: Bosley has been in hell all this time, and this is his eternal torture — created by an unseen, all-powerful god who prefers to be called “Charlie.”

I actually think the script of the pilot is not bad, if you remember that “not bad” for this kind of show means it can — nay, must — include a heaping helping of cheese. It also includes a cute idea of paying homage to the original title sequence (and the interstitial sequences leading into commercial breaks) by calling for a split-screen technique that seems like 24, except with the screen cut into different shapes. Then again, I thought the script of the Rockford Files remake wasn’t bad, and that pilot went nowhere thanks to casting and execution problems. If this one winds up the same way, the producers can always blame the director too.

The big news about the remake script, which has already been announced, is that the Angels are not ex-cops but ex-criminals recruited by the mysterious Charlie. That makes it sound less like Charlie’s Angels and more like The Mod Squad (making this my second Mod Squad reference of the week), but as long as Aaron Spelling gets his posthumous royalty cheques I’m sure his ghost will be fine with it either way.

Speaking of Charlie’s Angels and Spelling, one of the most revealing anecdotes about the producer — and by extension, much of commercial U.S. TV — comes from Barney Rosenzweig (Cagney & Lacey), one of several producers Angels had in its famous first season. Rosenzweig, who tried to add a slightly more feminist touch to the show in the episodes he produced (it didn’t really work out), told this story in the book Inside Prime Time by Todd Gitlin, describing Spelling’s style:

Rosenzweig calls it “Show and tell.” On a Spelling show any plot point important enough to signal once is signalled twice. “He shows the scene, and then in the next scene everybody talks about what was just seen. ‘You’ll never believe what just happened! This just did this and this just did that.’

“You know, when you do television episodes, especially action-adventure shows, you have a tendency to remake all the old great movies. Well, one of the episodes I was doing was sort of a mild ripoff of Foreign Correspondent. It took place at a resort… [a diplomat played by Theodore Bikel has disappeared and] nobody believes [Kate Jackson’s character]. She goes back to the apartment, pissed off that her friends don’t believe her, and she sees on the dining room table the cigarette lighter. Very distinctive cigarette lighter. Picks it up. Aha! Evidence that he was here.

‘”Now, we’re running the rough cut, and I say to Aaron, ‘I’m going to get a close shot of the cigarette lighter, and Kate’s hand will come in and pick it up and light it, so it will be one shot, instead of just an insert. So we’ll have that tie-in.’ Aaron says ‘Good idea, good idea.’ Then he says, ‘Listen, when you do it, get the insert earlier with Theo’s hand, showing him putting the lighter down on the table.’ He had a few other notes. I said, ‘I like your notes. We’ll accomplish them, but one I have to really disagree with violently.’ He said, ‘What’s that?’ I said, ‘I really don’t want to put in that insert of Theo Bikel putting the lighter down on the table in the previous scene. It’s a real red flag. I mean, it just says to everybody, Uh-oh, look out!’ And he says, ‘Well, of course, but you must do that.’

“I said, ‘I don’t understand. Look, to me, everything I’ve learned about picture making is to go for revelation, to learn about something through the eyes of a principal. Don’t intrude the camera to have the audience see something that our cast doesn’t. It’s much better to learn about it through Kate.’ Big argument. Finally he said, ‘Look, just do it.’ Aaron was the boss, right? He owned the store.”

That night at a party, a friend reminded Rosenzweig, who was complaining bitterly, of the conventions of children’s theater: “The villain walks out onstage and says, ‘Heh-heh-heh, I have the secret matchbook, and I am going to hide it. I am going to put it behind this basket, and the heroine will never find it. Heh-heh-heh!’ And he walks off. Now the heroine comes out and says, ‘Where oh where is the secret matchbook?’ And all the kids in the audience say, ‘It’s behind the basket, it’s behind the basket!’ That’s what Aaron does. He believes that’s what the American audience is, you see.”

Sure, Rosenzweig sounds bitter, and anyone trying to bring the remotest amount of sophistication to a Spelling product must have been driven out of his mind. But that technique — show and tell, always recap things for the audience, let them know that something’s important right away so they can look out for it later — is absolutely a part of commercial mass-market TV. Spelling was a little more open about it and a little less concerned with disguising it (every mystery show has to recap stuff for us; the sophisticated ones try to disguise the fact that that’s what they’re doing). And of course he had an instinct for what the public needed spoon-fed to it; he didn’t seem to do it for cynical reasons, but because this was genuinely the kind of thing he liked. But cynically or sincerely, we’ll never completely see the end of TV producers thinking we are basically children.