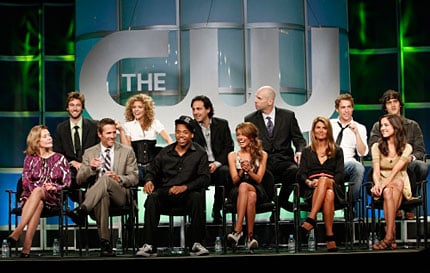 I like to do these “Better Know a Writing Staff” posts not necessarily about the best shows, but about shows that require an interesting mix of writers with a variety of backgrounds. 90210 certainly isn’t a patch on the original (which was not “great” either, but it worked), but writing for the show must be an interesting challenge, because it’s trying to do the impossible: be a teen soap like the original and be a hip, now kind of show. The writers have not managed to pull this off so far, but here are the people who are trying to pull it off.

Gabe Sachs & Jeff Judah (executive producers, showrunners) are, as they themselves have put it, “from the Judd Apatow camp.” Judah was a comedy writer for David Letterman, while Sachs was a USC film school graduate who wrote some sitcom episodes; they formed a partnership in the late ’90s and got a job writing for the first and only season of Freaks and Geeks. After that show was canceled they created some unsold pilots and spent a year as staff writers on Just Shoot Me, before creating a teen show of their own, Life As We Know It; a bit Freaks and Geeks-ish but soapier, it lasted only one season but has a cult following and is available on DVD. They then created several more unsold pilots before accepting the invitation to run 90210 after Rob Thomas (who had written the first draft of the pilot) decided not to do the series. A lot of times when you see veteran writer-producers running a show they didn’t create themselves, it’s after they’ve done several original shows that didn’t get picked up, and they understandably want to do a show which will actually get on the air, even if it’s not “their” project.

Caprice Crane (staff writer) is the daughter of Tina “Ginger on Gilligan’s Island” Louise. Her official website is here. She worked at MTV as a writer and producer for several years, then got some attention with two light comic novels about selfish twenty-somethings, Stupid and Contagious and Forget About It. On the basis of her novels, she was asked to come back to Los Angeles and work as a staff writer on 90210. Apparently the producers of 90210 are hoping she’ll be their Diablo Cody — someone who can write girl-centred comedy/drama that has some kind of hipness to it.

Jill Gordon (co-executive producer) is probbly the most senior writer involved with writing a teen show. She started out as a freelancer writing for sitcoms in the ’80s, contributing to Laverne and Shirley in the year when Shirley wasn’t there, as well as Silver Spoons and One Day At a Time and a bunch of shows nobody remembers. Like a number of writers in the late ’80s, she started to transition into the new form dubbed “dramedy,” one-camera, laugh-track-free shows that were not strictly comedy or drama (anticipating today’s many hybrid shows), writing and producing many episodes of The Wonder Years and Doogie Howser, M.D. She also worked frequently for the Herskovitz/Zwick team, the masters of angsty domestic comedy-drama, on Thirtysomething and My So-Called Life. She wrote a teen dramedy movie called Angus, which has a fan following 13 years later, and created a dramedy for NBC called First Years. Her background, then, is a bit of comedy, a bit of drama and quite a lot of teen shows and movies, so her presence on the new 90210 staff is not a surprise.

Darlene Hunt (consulting producer) is an actor/writer/comedian. As a comedian, she’s been a member of the famous Groundlings troupe in L.A., and went on from there to do a number of guest roles on comedies, a part in Mike Judge’s Idiocracy, and a regular role on the Ted Danson vehicle Help Me Help You. As a writer, she’s written a number of plays, the most successful of which was Platonically Incorrect, which she wrote for herself and Sean Hays. In 2003 she wrote a pilot for ABC based on the play, which was produced but not picked up as a series. She also wrote some other unsold pilots as well as episodes of Will & Grace and Good Morning Miami.

Jason Ning (co-producer) wrote for the last season of Crossing Jordan and the second season of Burn Notice.

Sean Reycraft (producer) — Shenae Grimes isn’t the only Degrassi: the Next Generation draftee on this show. Reycraft was a writer on Degrassi and has written for many other Canadian shows such as Slings and Arrows and The Eleventh Hour, as well as writing films and plays. Toronto Life magazine did an interview with him about the experience of working on his first American show, with a publicity buildup that dwarfs anything any Canadian show could get. He admits that the show is “having some birthing pangs” and that his first episode may have been a little too moral and responsible.

Dailyn Rodriguez (executive story editor) –Another example of how writers are drifting from half-hour comedy to hour-longs: she started out working for Bruce Helford, creator of The Drew Carey Show, on two of his less-successful star vehicle shows, George Lopez and Freddie (Freddie Prinze Jr.). But she soon moved over to hour-long shows with comedy elements, becoming a staff writer on Ugly Betty and now 90210.