Bev Oda is trying SO HARD

You have to admire Oda's grade-school panache

Like many of you, I have long been dismayed by the meagre entertainment value provided by the federal political scandals in our country.

We get Bev Oda’s paperwork.

At first glance, this scandal doesn’t have a lot going for it. No money stolen. No abs revealed. No action-packed subplot about Aztec gold. And no one I care about involved. In fact, until just recently I was pretty sure that KAIROS was a character from The Matrix.

Still: going all out to make this one worth watching, Oda is. 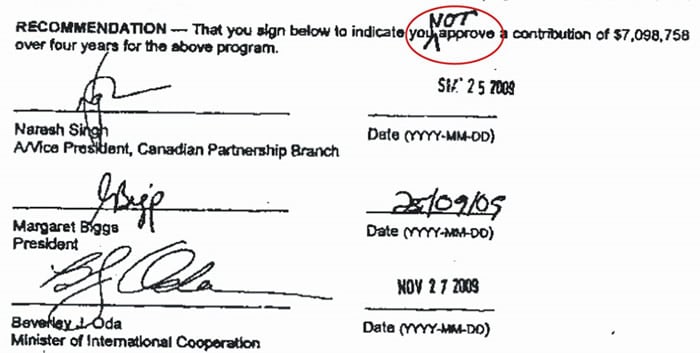 You have to admire the grade-school panache with which Oda tried to pull this off. The little up-arrow. The word NOT all in caps. SO ADORABLE. It’s just how the climactic scene of In the Loop would have played out if the brilliant British spin doctor had been replaced by an eight-year-old boy, or a clever parakeet. (Also: it’s weirdly endearing that she wrote – or had written – only the word NOT, instead of DO NOT. I not approve of her grammar!)

Yesterday, Oda said: “The way in which this case has been handled, including by myself, has been unfortunate.”

That’s a spectacular quote. It appears to be an apology of sorts, or at least an admission of… something. It’s benign enough that at first you pass right over it, accepting it for what it seems to be. But let’s parse it a little more closely.

“The way in which this case has been handled…”

Nice use of the passive voice there. Effectively distances Oda from responsibility even as she pretends to attempt to take it. The passive voice: the official voice of those up shit’s creek!

Here’s the money clause. By saying “including by myself,” Oda again appears to take an element of responsibility. But wait: Isn’t this “case” ENTIRELY about herself? Who else’s self is it about? She ordered the document doctored. She lied – flat-out lied – about doing so. She even lied about why the decision to defund KAIROS was made in the first place. It’s like Tiger Woods saying: The way in which this sex life has been handled, including by myself, has been unfortunate.

Again, this is just brilliant. What happened was not a mistake, not an error. Not a lapse in judgment. Not a firing offence. Not the lamest attempt at document-tampering since I scratched out “sample,” put on a monocle and tried to cash that “You may have won $10,000,000!” cheque from Publishers Clearinghouse. It’s unfortunate – like overcooking the salmon or forgetting to put the Chablis in the fridge.

Oh, darn it all: I doctored a government document, altered the intentions of two senior government bureaucrats and lied about it to Parliament.