Brad, Quentin and the Canadian 'basterd'

Overshadowed in Cannes by Pitt and Tarantino, Mike Myers says he's "honoured with a 'u' " 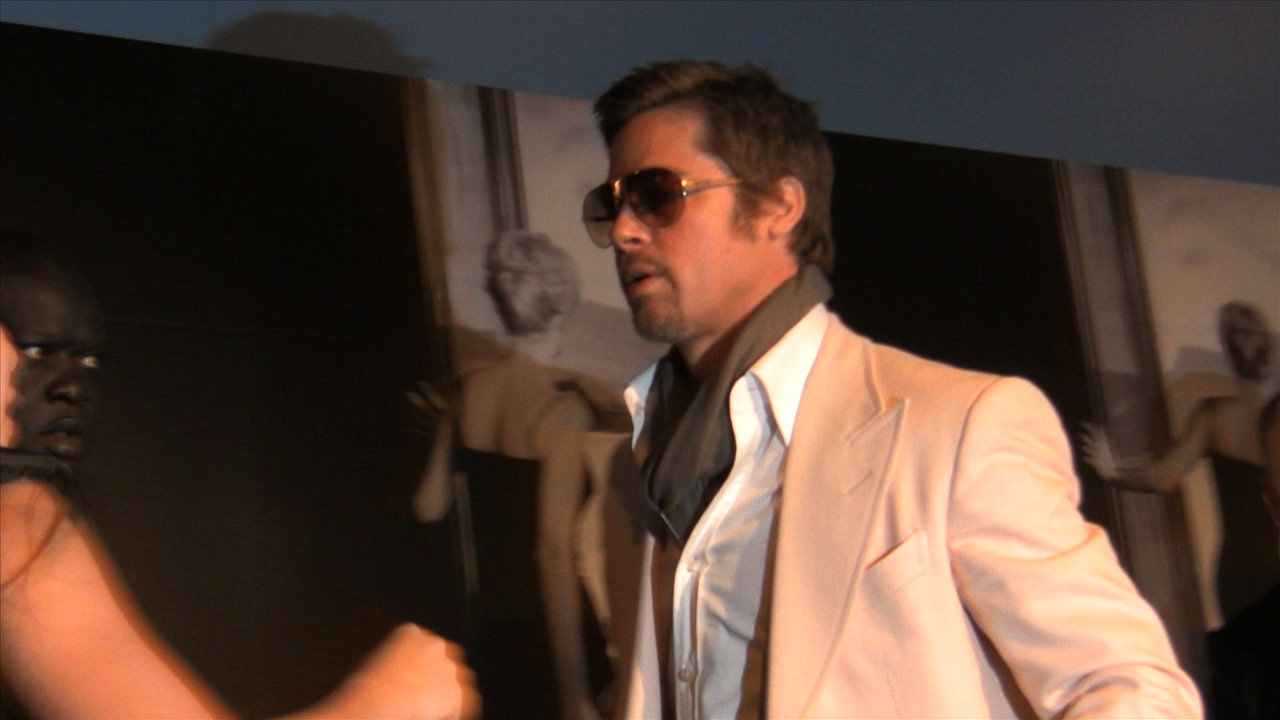 Yesterday was Brad Pitt Day in Cannes—although hard-core cineastes, especially the Gallic variety, perhaps thought of it as Quentin Tarantino Day. And for die-hard Canadians, it was Mike Myers Day. In the biggest blitz of Hollywood talent that we’ve seen during the festival, all three were on hand for the premiere of Inglourious Basterds, Tarantino’s outrageous Second World War epic. It was one of the most anticipated titles among the 20 films in competition here. The 2,300-seat Lumiere theatre was packed for the morning press screening, well before the 8:30 a.m. start time. And at the end of the two-and-half-hour opus, the Palais erupted with some of the strongest applause we’ve seen here. The movie is a hoot, and so was the press conference that immediately followed the morning screening. More on that in minute, but first a few details about the film. 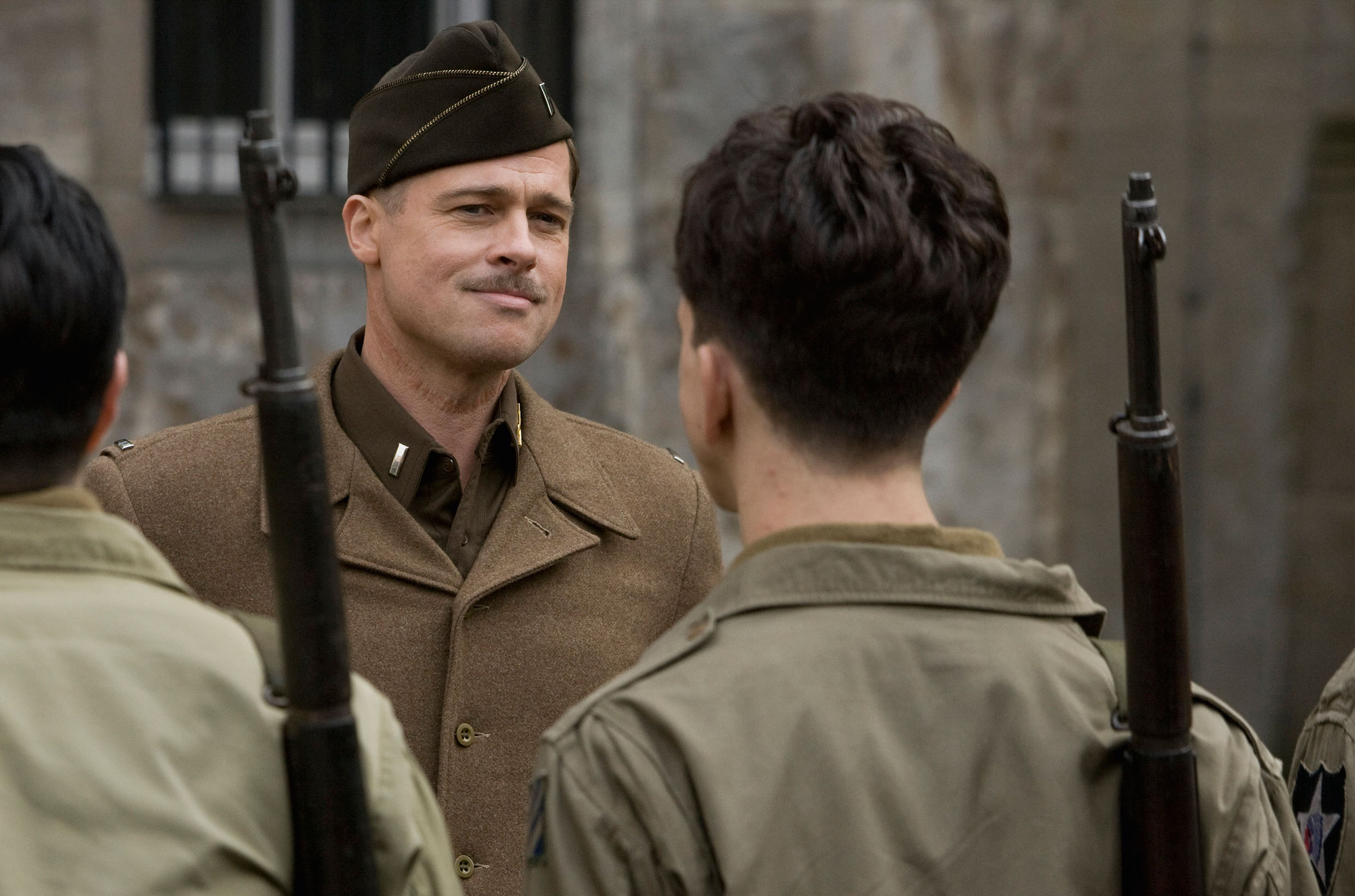 It was nothing like what I’d expected. This Nazi-scalping escapade is, in Tarantino’s view, a “genre film,” yet it’s quite unlike any war movie I’ve seen, including the 1978 combat picture from which it derives its title. It’s a typical Tarantino pastiche of genres: Jewish revenge fantasy, espionage thriller, theatrical comedy, and combat picture as spaghetti western. I watched the original movie, by Enzo Castellari, on the plane to France. It’s a Dirty Dozen men-on-a-mission combat picture, and it’s action-packed. Tarantino’s film is in no sense a remake. Although it retains the basic notion of sport-hunting Nazis, the story is utterly different. And despite some explosive action sequences, the movie is mostly talk—larded with the kind of marathon, teased-out dialogue that Quentin loves to indulge in. It’s conducted in three languages: French, German, English. And less than half the dialogue is in English, so essentially Tarantino has made his first foreign-language film, a pulp fiction love-letter to the New Wave’s European homeland. Rich with references ranging from Leni Reifenstahl to Marlene Dietrich, the film is also a love letter to cinema—the second we’ve seen here after Almodovar’s Broken Promises, and it too features a film within a film.

Set in Nazi-occupied France, the story revolves around a squad of Jewish American soldiers on a mission of revenge. Led by a Southern good ol’ boy colonel played by Brad Pitt, they hunt Nazi soldiers and take no prisoners: they take scalps. But at a certain point the whole scenario focuses on a cinema owned by a Jewish woman (who has seen her entire family killed by Nazis. When Goebbels decides to use her cinema for the gala premiere of a propaganda film celebrating a German war hero, it becomes the target for an Allied plot—to blow the German high command to smithereens.

The international cast includes Myers, who’s unrecognizable as a Brit officer, and German actor Christoph Waltz, who plays the sadistic Jew-hunting villain, stealing every scene with a quicksilver wit in three languages. He’s an instant front-runner for Best Actor.

The press conference was bizarre. The media treated Tarantino as the star, while Most of the questions were directed towards him, and the hyper-energetic filmmaker reveled in his moment of triumph, claiming his place on the high altar of world cinema. “To me,” he said, “there’s just no place like Cannes for filmmakers on the face of the earth. I’ve heard people quote back things I’ve said: ‘Oh, it’s the Mount Olympus of Cinema, it’s the Cinema Olympics, it’s this, it’s that, it’s Cinema Nirvana.’ Well, it is! Here on the Riviera, cinema matters. It’s important.” Quentin even lauded the way critics here can make or break a movie overnight. “It’s like the cat is out of the bag for the entire Planet Earth. And I am down with that. I am not an American filmmaker. I make movies for the Planet Earth. And Cannes is the place that represents that.”

As for Brad, astonishingly, no one asked a dumb question about Angelina, although the two of them did create frenzy on the red carpet that evening. (Making their third Cannes appearance together in three years, their presence has become like a ritualized royal visit. At the press conference, however, Pitt did dish about Tarantino’s casting couch techniques. After the two of them had stayed up until the wee hours discussing the film, the next morning, he recalled, “I saw five empty bottles of wine and something that resembled a smoking apparatus. . . Apparently I agreed to do the movie.” Tarantino talked about the casting as the consummation of a long-standing crush. “Artistically,” he said, “me and Brad have being sniffing around each other for a while.” But it had to be the right role, and when it finally came to courting time, Tarantino was afraid of rejection.

Inevitably, Tarantino was asked about the misspelling of the title, which gave the filmmaker a chance to get up on his auteur haut cheval: “Here’s the thing,” he said. “I’m never going to explain that. You do an artistic flourish like that, and to explain it would just take the piss out of it and invalidate the whole stroke in the first place.”

Meanwhile Myers kept a low profile, becoming the butt of an ongoing jabs against Canadians. When Tarantino was listing the nationalities represented by the cast, he piped up to say, “And Canada!” Which promped this crack from the director: “That’s a country?”

I ended up asking the only question of Myers. And just the notion of a Canuck asking the Canuck a question was cause for much hilarity at the podium. As I tried to begin, Myers put on his earphones for the instantaneous French translation. Then, on a serious note, he talked about how he was thrilled to be the movie because he’s a Tarantino fan and a child of British military parents. “I did a jig,” he said. “I was happy. I’m still very happy. I’m kind of having an out-of-body experience at the moment.” Then he added: “I’m very honoured to be here—honoured with a ‘u.’ ”