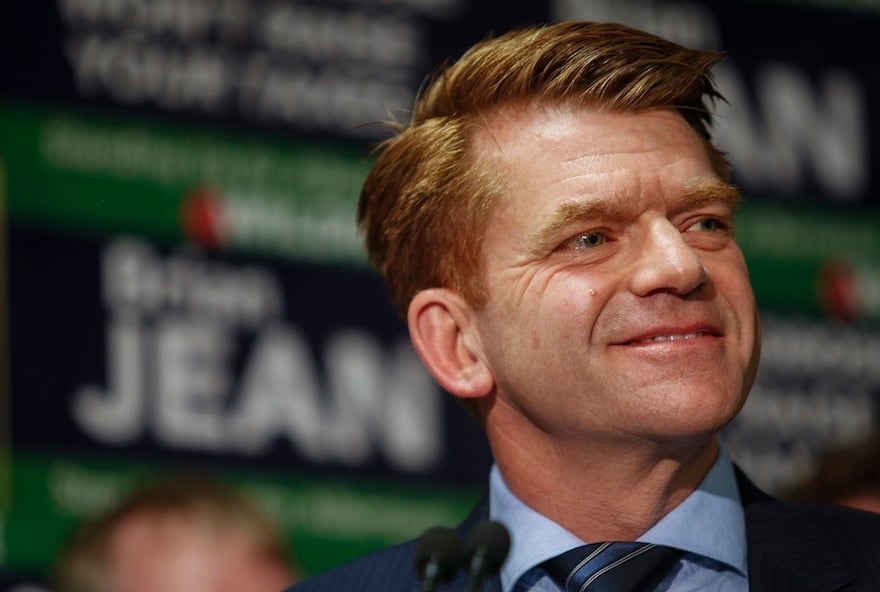 CALGARY – A leadership candidate for Alberta’s new conservative party says he hopes organizers of the Calgary Pride parade will reconsider and allow the party to participate.

Brian Jean, who was Opposition leader in the legislature, said Monday he is disappointed with a decision by organizers on the weekend to reject the United Conservative Party’s request to join the parade. They said the party doesn’t have a clear policy stance on issues such as sexual diversity.

Jean said he had asked to march in the parade and has always championed diversity and tolerance.

“I have many family members who are gay and I know the community. Frankly I’m just disappointed,” Jean said after outlining his education platform as part of the leadership race.

“Possibly they’ll have a change of heart and hopefully they will. This is all about uniting people and putting aside differences and divisiveness.”

Jean’s campaign organizers said that while plans are not firm, he is aiming to attend as a spectator.

Organizers have invited party members to take a workshop on topics such as sexual health and gender diversity. Calgary Pride president Jason Kingsley did not immediately respond to a request for comment.

The party says interim leader Nathan Cooper will attend the parade as a spectator and all members of caucus have been invited to join him.

“While we are disappointed to not be participating in this year’s parade, we respect the organizing committee’s decision and look forward to showing our support for Calgary’s LGBTQ community as spectators,” said caucus spokeswoman Samantha Johnston in an email.

“Plans to attend a course offered by the Calgary Sexual Health Centre are in motion and final scheduling is being confirmed.”

Jason Kenney, former federal cabinet minister and leadership candidate for the new party, does not plan to attend.

“Mr. Kenney is always happy to attend events to which he is invited,” said campaign spokeswoman Annie Dormuth in a statement. “We have not received an invitation to this event.

“On Sept. 3rd, (Kenney) is committed to attending and speaking at several large multicultural community events to which he has been invited.”

Fellow leadership candidate Doug Schweitzer said he will come watch the parade with his family and other supporters.

“It’s important that all Albertans know that their leaders are there and that they’re supportive of different communities across Alberta,” said Schweitzer, who has made social progressive issues a key plank in his platform.

“Obviously we have a lot of work to do to build trust with the LGBTQ community.”

Jeff Callaway, who is also running to lead the party, said he had originally planned to march in the parade, but will probably go as a spectator.

“Treating people fairly and respectfully is just part of the foundation of our party, as it should be for any political party,” said Callaway.

The UCP was created last month after members of the Progressive Conservative and Wildrose parties voted overwhelmingly to join forces. A new leader is to be picked in October. That’s to be followed by a founding convention.

Both the PCs and Wildrose had strained relationships with the LGBTQ community.

The Wildrose party lost the 2012 general election in part due to its refusal in the campaign’s final days to sanction a candidate who once warned gays to repent or face eternity in hell’s “lake of fire.”

The PCs faced a backlash in government over their handling of gay-straight alliances before passing legislation acceptable to all sides in early 2015.

By law, students in any school can now form gay-straight alliances if they wish. The alliances are peer support networks designed to help young people better understand each other and to help LGBTQ students feel welcome.

Kenney has been criticized for urging that parents, in some circumstances, be told if their children attend a gay-straight alliance. Critics say that could out kids before they are ready and put them at risk of family estrangement or worse.