A Crazy Canuck skis with a daredevil director at B.C.'s answer to Sundance 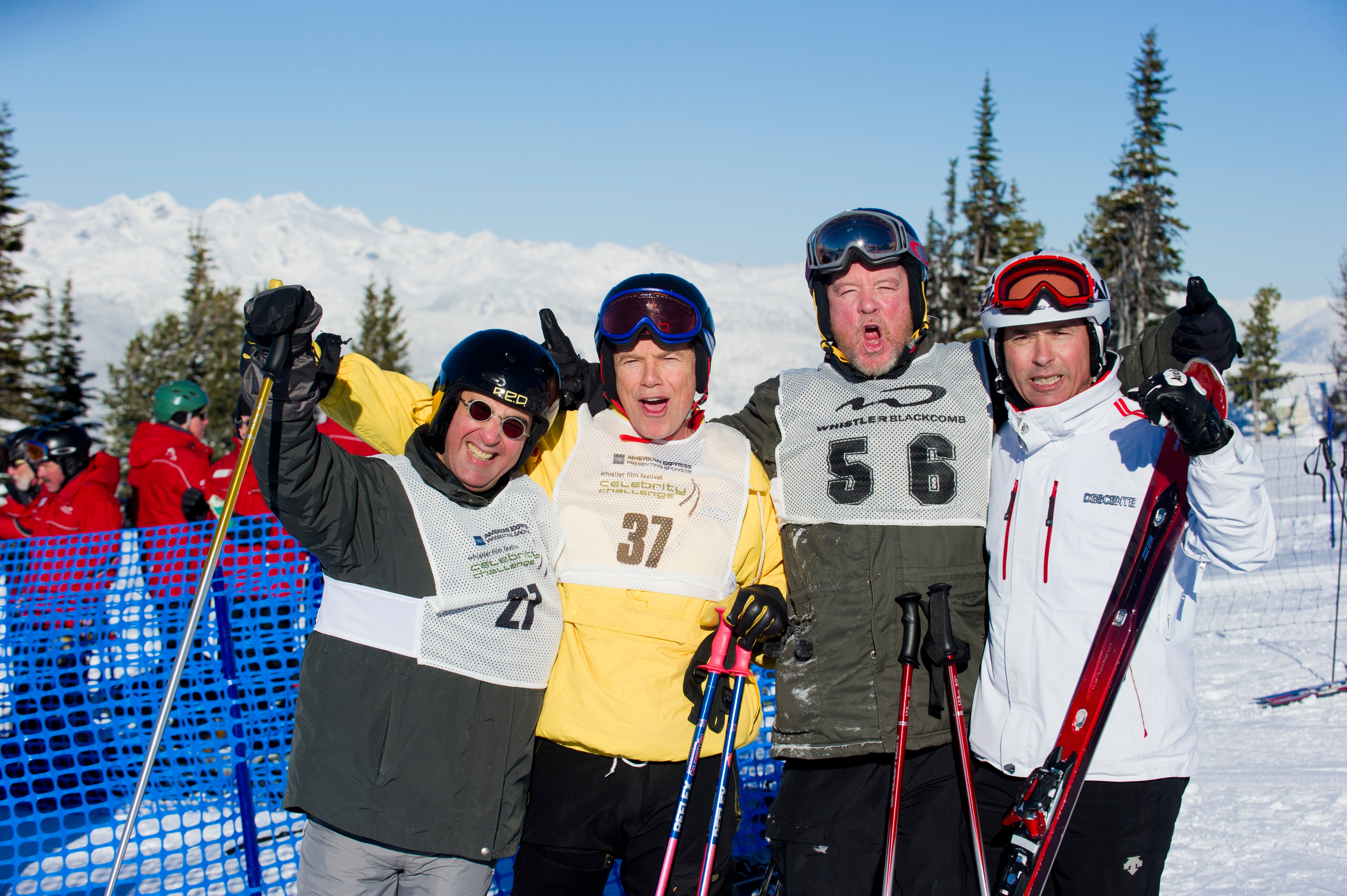 Just got back from the 10th anniversary edition of the Whistler Film Festival. I’ve been attending the WFF for the last eight years, more consistently than any festival other than Cannes and the Toronto International Film Festival. Why do I keep going back? Well, there’s an easy answer: it’s the skiing, stupid.  And I have to admit, spending a few hours in alpine heaven before watching movies and going to parties in a village where you don’t see a car for days is an unbeatable combo. The festival organizers encourage you to ski. When you come down from a day on the mountain, they act as if you’ve somehow contributed to their culture, this peculiar chemistry of snow and cinema. On Saturday, I took part in the festival’s annual Celebrity Ski Challenge, a friendly slalom race on a gentle pitch. To qualify, you don’t have to be a celebrity, or much of a skier, and the slope poses no challenge. But there’s something surreal about a festival that had Canadian downhill legend Steve Podborski, one of the Crazy Canucks, showing Bruce McDonald, rock’n’roll daredevil of Canadian directors, how to carve a turn—just hours before McDonald faced a cheering crowd at the world premiere of Hard Core Logo 2, which was followed by a party and an incendiary performance from Die Mannequin, the punk band that’s the subject of the movie. You won’t see that in Cannes.

Over the years, the Whistler festival has matured into something more than a guilty pleasure for ski bum cinephiles; it has carved out a niche as a unique summit of Canadian cinema. Sure, given the option, most of our filmmakers will still premiere their movies at TIFF, where they’ll be guaranteed maximum exposure. But it’s hard to get noticed amid TIFF’s industrial fray. And Whistler throws a singular spotlight on Canadian film. More than half the 68 films showing at WFF this year were from this country. (Full disclosure: one of them was my own 7-minute short, Yesno). In a relaxed schedule of panels, tributes and parties, the event serves as an intimate, high-powered salon for filmmakers, bringing together the BC industry with guests from Toronto, Montreal and beyond. There’s time to hang out. Unlike at Cannes and TIFF, not everyone is there, thankfully. This year, those who were there included directors Atom Egoyan, McDonald and Monte Hellman, actor Bruce Greenwood, screenwriter Jim Sheridan—and George Stroumboulopoulos, who hosted a dual tribute to McDonald and Hellman (Two Lane Blacktop). 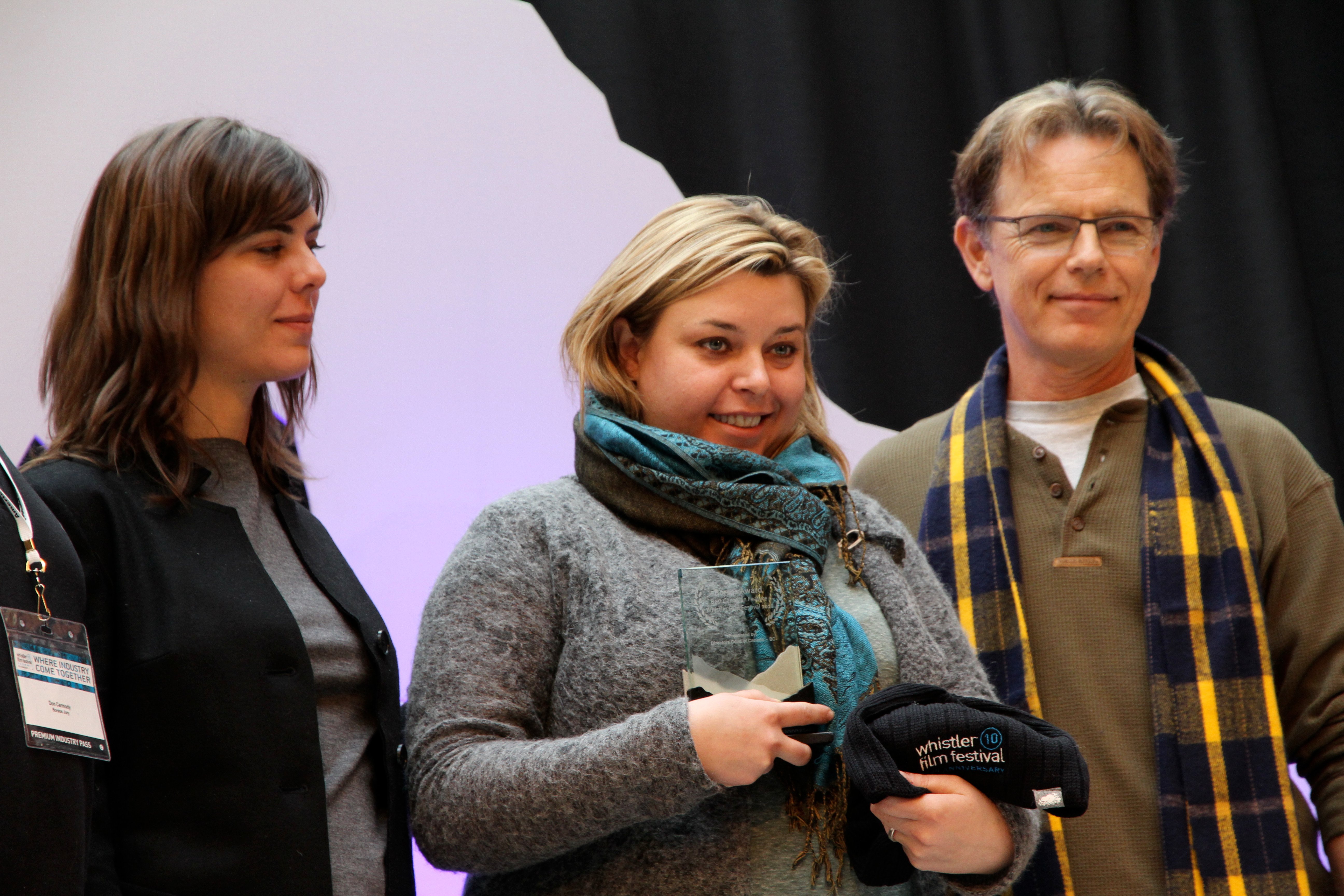 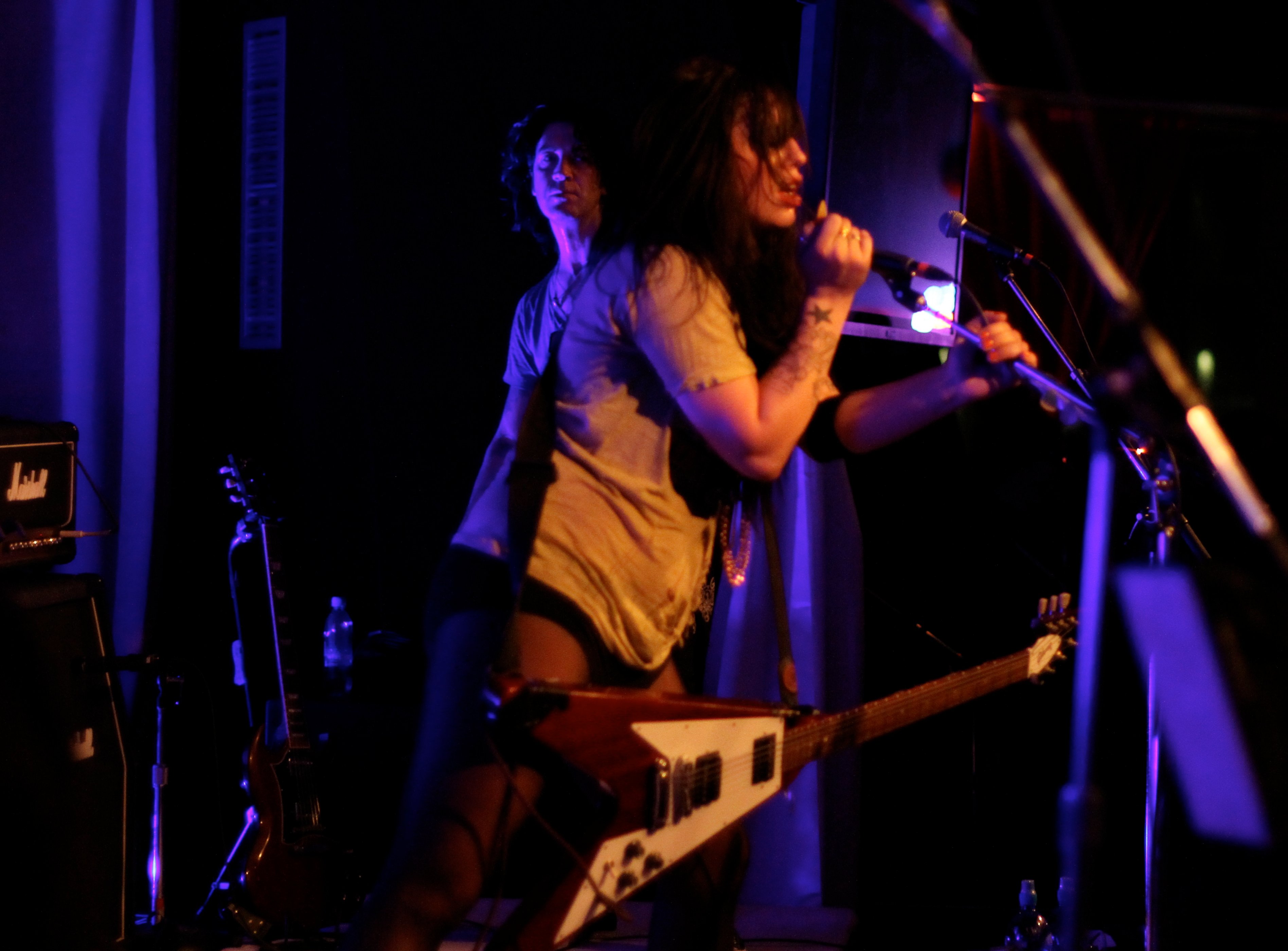 With three movies programmed—Trigger, Music from the Big House and Hard Core Logo 2—Bruce McDonald was the de facto king of Whistler, a role he wore as comfortably as his signature cowboy hat, graciously deflecting the spotlight back onto his hosts and saying there’s no reason why this festival can’t become “the toppermost of the poppermost.” McDonald, the bad boy of Canadian cinema, seemed to morph into its avuncular godfather. In stark contrast to his co-honoree, Monte Hellman—who showed Road to Nowhere, his first movie in 15 years—he has been remarkably prolific, making a total of four features this year (the fourth being This Movie is Broken). They all involve music, and a shoot-from-the hip, guerilla style of verite filmmaking. But you can hardly say he’s repeating himself. Although it’s nominally a sequel, Hard Core Logo 2 incorporates virtually none of the characters from the original cult hit, except for the wonderfully sardonic Julian Richlings as a record producer. It’s the tale of a punk band, Die Mannequin, whose lead singer is channeling the spirit of the rocker who committed suicide in the original movie (Hugh Dillon). McDonald, who puts himself on camera as the mockumentary filmmaker along with his wife and child, is basically the lead actor in what amounts to a gonzo meditation on the search for emotional maturity. The narrative is reckless and tangential, but that’s part of the charm. 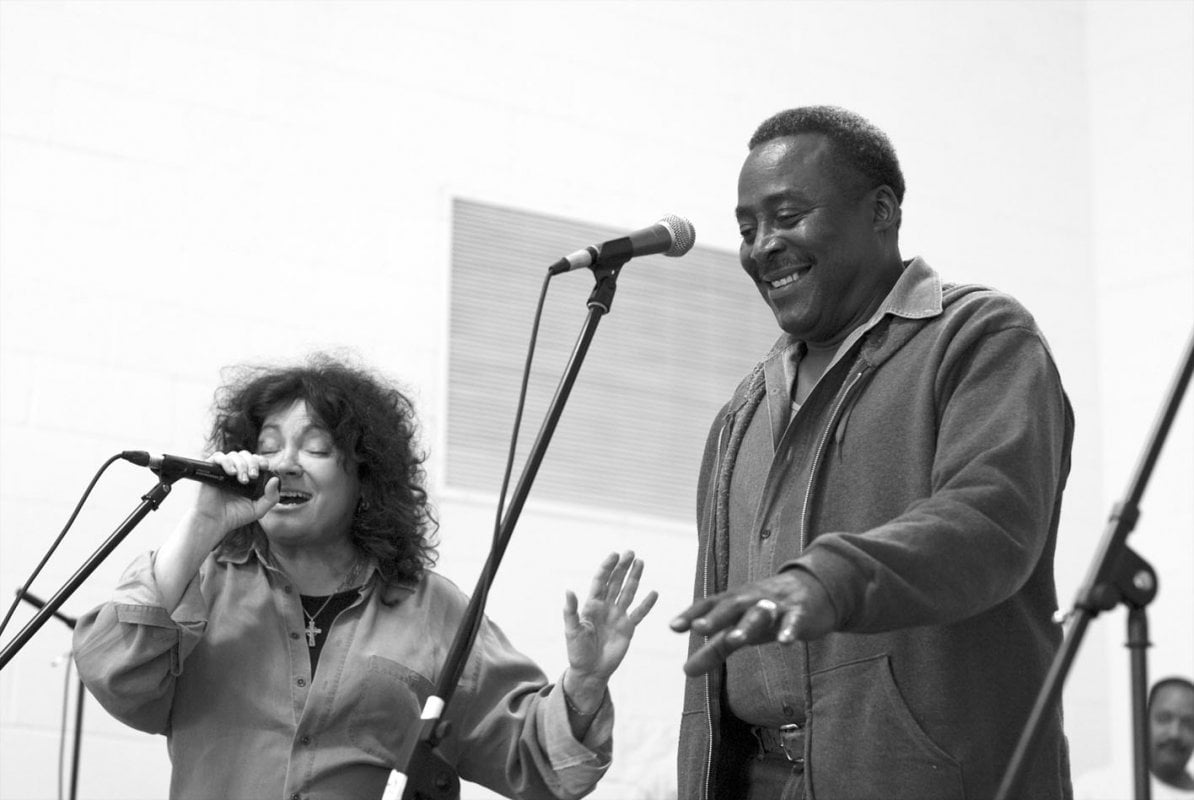 a scene from 'Music from the Big House'

After directing so many doc-like dramas, with Music from the Big House, McDonald has made his first documentary feature, an exquisitely shot black-and-white portrait of musicians serving life sentences in Louisiana’s infamous Angola penitentiary. It follows Hamilton-born blues singer Rita Chiarelli as she rehearses and performs with several bands formed by inmates within the prison. She’s a bit like Janis Joplin reborn as a Christian missionary, and as she turns the black inmates into her backup singers, it can be a little hard to take. McDonald documents the phenomenon without commentary. But in the inmates, he finds an extraordinary set of characters, and the result is a kind of Buena Vista Social Club Behind Bars. The film refrains from revealing the musicians’ crimes until the tail credits, and the grim details come as a shock given how much we’ve warmed to these guys. Although Music from the Big House doesn’t explore all the questions it raises, it’s a deeply moving and haunting piece of work.

By throwing their weight behind Whistler, filmmakers like McDonald and Egoyan are recognizing its bid to become Canada’s Sundance, a creative hot tub for Canadian talent. Hard Core Logo 2 is the first movie by a significant Canadian director to have its world premiere at Whistler. And as McDonald points out, the idea for the film was hatched at a previous visit to the festival. But Whistler has a long way to go before it can live up to its own hype. The screening facilities are makeshift, the sound and projection are not first class, and the production of special events such as the tributes often seems haphazard.

Shauna Hardy Mishaw, the WFF’s co-founder and executive director, is a redheaded spitfire who preaches the future of the Whistler Nation with messianic fervour. The festival, she says is “at the tipping point.” And she’s at the crest of  a funding drive to raise $5 million for capital projects that will include a state-of-the-art cinema planned to open for the 2011 festival. Which is wonderful. But, as if still infused by Olympic-scale ambition, Shauna predicts that, if we all pull together, Whistler will become one of the very top film festivals in the world. That seems unlikely. And not just because it would need more cinemas.

Every festival has to find its niche, and the field is increasingly crowded. The international superpowers of the festival circuit—Cannes, TIFF, Berlin, Venice and Sundance—are long established. Even Sundance still has trouble outgrowing its role as a springboard for American indie cinema. If Whistler stays the course and continues to carve out its niche as a creative turbine of Canadian cinema, that’s more than enough.  Sure, it should continue to present international work, but if it keeps its prime focus on developing, showcasing and awarding Canadian films, it can play a vital and enduring role. Whistler has never been limited by West Coast provincialism; it draws heavily on filmmakers from the rest of Canada, and program director Stacy Donen, who joined last year, raised the WFF’s pedigree with this year’s selection. Whistler will need better production values. But it has all the other  key ingredients to building a festival: warm hospitality, solid programming and a dash of glitz—plus the skiing, the locale, and the frontier-bashing confidence that seems rooted there.

There was one critic at Whistler who complained to me that there weren’t enough films at the festival to keep him occupied. But he doesn’t ski. And Whistler doesn’t show movies in the morning. Personally, that’s one thing I would not want to see change.