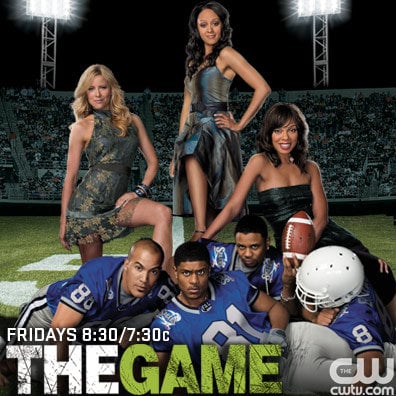 The return of The Game on BET, years after being canceled when the CW divested itself of African-American sitcoms, did better than almost anyone expected: 7.7 million viewers for its first episode back. That’s something like three times as many viewers as it got on the CW network.

The Game, a spinoff from Girlfriends, followed an interesting path even before it was canceled and resurrected. Originally a regular three-camera sitcom, it got more and more dramatic, becoming a half-hour fusion of sitcom and straightforward soapy drama of the kind that hadn’t been seen since at least the ’90s. Part of this might have been due to the recognition that comedy was on its way out at the CW; the creator tried to save it by arguing that it should be retooled as a one-hour drama. It also dropped the studio audience at some point, and is now about as close as U.S. TV gets to the old form of single-camera-with-laugh-track. At a Television Critics’ Association panel, the producer even proudly admitted they’re using a laugh track to reinforce the sitcom elements of the show in the midst of the drama.

As Erin Copple Smith points out, the show’s revival on BET is both good news and bad news: good news, because it shows that BET can be a home for new episodes of sitcoms; bad news, because it will increase the perception that shows with African-American leads are not mainstream network shows.

Of course, since the CW gets fewer viewers for its show than a good cable network, it raises the whole question of what a “mainstream” network is and whether the CW is one. If this show had the potential to get a lot of viewers — and viewers who mainly fall into the young female demographic that the CW claims to be aiming at — then why couldn’t the network get those viewers? Is it about promotion, or targeting, or just that the show’s cancellation (and the save-our-show campaign connected with it) actually built its audience? It does seem like the CW decided that its African-American comedies were niche shows, only to replace them with shows that are even more “niche.”

Anyway, this is another example of what James Poniewozik calls “a big market for basic cable in making shows that broadcast networks could make, but for some reason don’t.” The thing I’m wondering about is if someday one of these basic-cable comedies could turn out to be really good. TV Land, for example. Hot in Cleveland is not a show I’m very impressed by — the actresses are pros and so are the writers, but everything is a bit standard and predictable — but TV Land is still new at this, and as they continue to draw on the large pool of talent neglected by the networks (older sitcom actors and writers) they could eventually come up with a first-rate show. Same with BET and ABC Family and other networks that are getting into the half-hour comedy game. It’s not guaranteed that their shows will get better — Nickelodeon and Disney fans frequently argue that those networks’ comedies used to be better than their later, more popular entries. But you never know: one network might find the right combination with one new show.