Charles Taylor and the tarnished pursuit of justice

When old Nazi collaborators are found here, our government responds. Not so when an alleged African war criminal is discovered 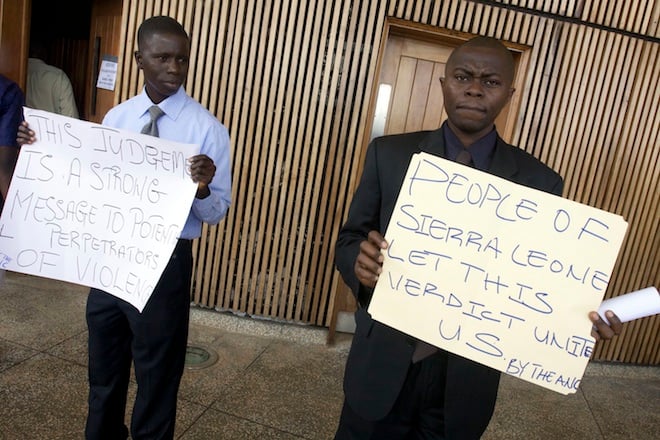 Charles Taylor’s conviction at the UN-backed Special Court for Sierra Leone is a partial victory for justice and for the countries Taylor traumatized: Liberia and Sierra Leone.

The Court found Taylor, a former warlord and then president of Liberia, guilty of aiding and abetting war crimes — including terror, murder, and rape — because of his support for rebel groups in Sierra Leone, including the Revolutionary United Front, a marauding gang of psychopaths and child soldiers that he created to destabilize the country and ensure a flow of blood diamonds into Liberia.

The wars in Liberia and Sierra Leone were sordid almost beyond description. Children fought them. They involved cannibalism and sex slavery, mass rapes and voodoo. Little boys went into battle with sticks they pretended were guns and fluorescent wigs they thought would stave off bullets.

Detritus from the wars washed up in Canada. Maclean’s revealed that one of Charles Taylor’s former commanders named Bill Horace, implicated in multiple war crimes, was living freely in Canada. When old Nazi collaborators are found here, our government responds. It’s big news. Not so when an alleged African war criminal is discovered.  The Maclean’s story was published and all-but ignored.

Other times the pathos of West Africa’s wars could provoke pity even for those intimately involved in their worst atrocities. While researching Bill Horace, I learned about another Liberian living in Canada who had led one of Charles Taylor’s ‘Small Boys Units,’ groups of drugged children as young as eight who fought and massacred with no apparent fear or restraint. But the former commander was 11 or 12 years old when he fought. I let him be.

Charles Taylor, more than any other single individual, was responsible for these horrors. His conviction is deserved, and to the extent that it sends a message to others of his ilk that they will not have impunity, even if they lead a country, it serves a greater purpose.

But the Special Court deserves harsh criticism for its treatment of at least one Liberian who was vital to its efforts to bring Taylor to justice. Cindor Reeves, Charles Taylor’s former brother-in-law and a gun and diamond runner, risked his life to help the Special Court build its case against Taylor.

The Court put Reeves and his family in a makeshift witness protection program in Europe. It was a flawed and informal process, the result of a deal the Court made with Germany. Reeves hated it there. His legal status was precarious, and the Special Court failed to properly reimburse the German police who were managing his case, making him fear for his future in Germany. He moved with his family to Canada and applied for refugee status.

“Although I don’t necessarily support anyone fleeing to another country without following the proper legal and immigration process, I can certainly understand why Mr. Reeves fled to Canada after being abandoned by the Special Court,” Alan White, chief of investigations at the Special Court from 2002 to 2005, wrote in an affidavit.

The Court didn’t completely abandon Reeves in Canada. It still approached him whenever it needed his help. Reeves freely gave it. Canada, meanwhile, tried to deport him. Reeves’ legal bill piled up. At one point he moved his family into a homeless shelter. The Special Court did nothing. Canada eventually denied Reeves refugee status, while granting it to his wife and children under the bizarre reasoning that it was too dangerous for them to return to Liberia because of their relationship to Reeves.

Reeves is now in hiding in another country. This is a tragedy for him and a stain on Canada’s record of treatment of refugees. But it’s also a blow to the future prospects of international justice. Knowing how a UN-backed court treated Reeves, next time an alleged war criminal is indicted and an international court approaches his former associates to ask for help, how will they respond?