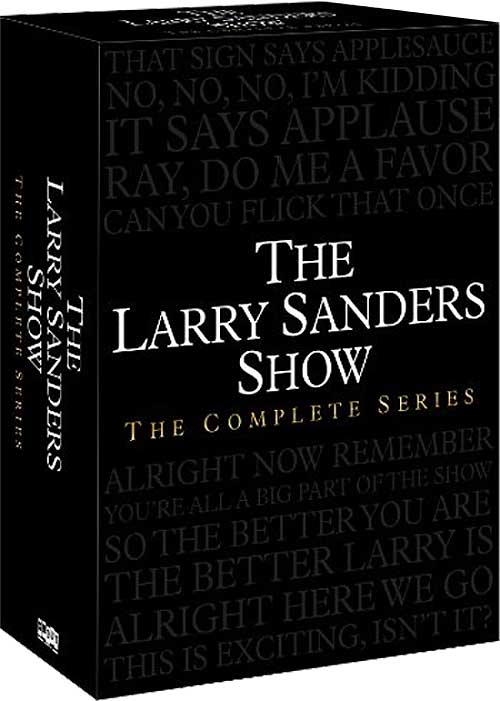 The most important TV-on-DVD release for the rest of the year is Shout! Factory’s The Larry Sanders Show: The Complete Series. The show itself is a classic. There are so many ’90s sitcoms that hold up well today, it almost seems to devalue them; one gets tired of hearing that this or that half-hour comedy was great. But nevertheless, it seems like the ’90s was an era when there was a confidence and a professionalism in the making of half-hour comedy that eludes even some of the good shows today (the reverse applies with drama; some of the dramas of the era — not Homicide, though — seem a little ramshackle now). Larry Sanders was the HBO alternative to mainstream network comedy, but it partakes of the same confidence, the sense that you can follow the writers and performers because they know what they’re doing.

Shandling had tried out all kinds of interesting things on It’s Garry Shandling’s Show, which was wonderful but uneven. When he did Larry Sanders, he’d learned his trade and could apply everything he knew about comedy, storytelling, and show business. Like several other great ’90s comedies, it feels fresh but it also feels like a distillation of experience (sort of like The Simpsons was a combination of experimental energy with the long experience of James L. Brooks and Sam Simon, and Frasier applied a lot of what its writers had learned in previous shows and careers). It looks and feels loose, but it’s actually pretty tight. Today, Curb Your Enthusiasm has some of that same professionalism and skill, but it’s not nearly as ambitious as Larry Sanders was.

One thing that the otherwise admirable DVD set can’t fix, as the review mentions, is the quality of the prints: it never looked very good. I doubt it could be made to look better, since this is one of the drawbacks of the ’90s sitcoms. They were shot on film (except for the talk show segments on Sanders, which are videotape) but edited on video, so there are no original negatives to edit from. I think Seinfeld fixed this by creating new masters for the DVD version; without the money to do that, the video masters are all that exist, and since Larry Sanders was a low-budget show, it doesn’t look pretty.

Still, the lack of visual beauty on a show like Sanders probably helped the show be as good as it was. Paul Simms, one of the writers of the show until he left to do NewsRadio, once mentioned that he thought it “helped the energy” on Sanders that “even though it looks single-camera, we shot it with four cameras.” (This shows the problem with using “single-camera” as a term, but the term has stuck and there’s nothing we can do about it.) I don’t think the number of cameras really has an effect; what has an effect is that the show was shot fast: not much worry over lighting or angles, not a great deal of location shooting, not even a lot of extras in the background.

It all works because it fits in with the idea of going behind the scenes at a talk show, but it also creates the sense that we’re watching the characters interact without a lot of stuff coming between us. Whereas visually inventive comedies, while they can certainly get laughs from their visuals, can also dilute the comedy, making it seem like the lighting and multiple setups and music are getting in the way of us watching the actors do their thing. This may be another reason, apart from the comedy branding, why the music-free, simply-shot mock-documentaries like The Office and Modern Family tend to be the single-camera shows that connect with the widest audiences these days.

You can tell that Sanders was shot fast from looking at the list of episodes and the people who directed them. The first season had two directors, Todd Holland and Ken Kwapis (who directed the pilot and who has become to single-cam what James Burrows is to multi-cam, sort of the Pilot King). Holland was the main director for most of the seasons after that, often directing many episodes in a row.For example, in the fourth season Holland directed nine of the first ten episodes. To direct as many episodes as he did is very difficult for a more elaborate single-camera show; usually they’ll try to have one regular director, but he can never direct much more than half of the episodes in a season, while the others rotate among other directors. Larry Sanders was a faster show and presumably didn’t take as much preparation to direct; in that it resembled single-camera sitcoms of the ’60s, which were done in only a few days and could therefore have fewer directors (sometimes one director for the whole season).

Something similar is happening with Modern Family this season, though it’s hard to know how much more or less expensive it is than other shows. Still, it’s definitely a show that shoots pretty fast (similarly, the cast of My Name Is Earl once spent part of a commentary track talking about the shorter hours of the cast on The Office), and it shows in the number of directors they’re using; of the first seven episodes, five are directed by the current regular director, Michael Spiller. And on cable, look at FX: all three of that show’s current live-action comedies, It’s Always Sunny In Philadelphia, The League, and Louie, are done so fast that they can have one director for an entire season, just like Green Acres or something. They don’t have to have one director for every episode, but they can.

The success of one-camera comedies that can be shot fast and cheap doesn’t mean that all one-camera comedies have to be done that way — there are things a more elaborate, Parker Lewis/Malcolm in the Middle type of comedy can do that they can’t. But it does seem like a reminder of a paradoxical point about comedy: there’s no inherent advantage in spending more money. With drama, more money doesn’t mean quality, but it does give you the ability to do certain things that are associated with quality, and dramas are always trying to seem like they have more money than they really do. With comedy, a show can look like it was made quickly and without a lot of attention paid to visual splendour — and that can make it funnier. Of course there are limits; if a show is too cheap then there are funny things it can’t afford to do, just like The Simpsons was funnier than previous prime-time cartoons because it was somewhat better-animated. But a show can really benefit from the impression (false, but with a certain amount of truth underlying it) that the director is just turning on the cameras, letting the actors be funny, and picking the funniest — not prettiest — takes.