Clegg: is he good for the Canucks? 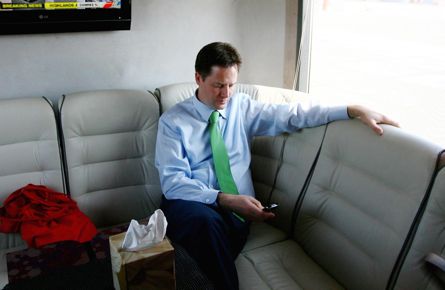 You’ve probably heard about the startling eleventh-hour rise in the polls that Britain’s Liberal Democrats have enjoyed since their leader Nick Clegg, a reformed skirt-chaser and unreformed atheist, leapt out of the tall grass to win an Apr. 15 televised election debate. It’s time Canadians started contemplating the domestic impact of a strong Lib-Dem performance in the May 6 vote.

Lately you can find individual UK polls that have the three major parties in almost every order except for those that have the ruling Labour Party at the top. Conservative leader David Cameron, until recently a heavy favourite to win the election and capture a majority, suddenly finds himself confronted with the possibility of a historic, 1964-Phillies-esque collapse down the stretch. Prime Minister Gordon Brown has been reduced to near-irrelevance on the hustings—but because of his Labour Party’s regional strength, his party is likely to control more seats than the Liberal Democrats even if Labour finishes third in the vote.

Punters at UK gambling site Betfair are currently forecasting better-than-even odds (57%) of a hung Parliament and a reasonable chance (fractional odds: 7-to-1) of someone other than Brown or Cameron becoming Prime Minister. Under such chaotic circumstances it is entirely possible that “someone other than Brown or Cameron” could end up being a coalition leader other than Clegg himself. And the price of the exotic “two elections in 2010” prop bet has soared, implying a 27% chance of a quickie second vote. Also, dogs and cats have been spotted living together in Scunthorpe.

The Clegg boomlet may not end up changing anything in the long run. But even though the UK parties map awkwardly onto ours, it would appear to have relevance to Canada on at least a couple of fronts. The Lib-Dem moment is the very same one of which the New Democrats have been dreaming since the Winnipeg Declaration, and of which they caught a brief glimpse in ’88; to wit, voters finally get tired of the choice between Coke and Pepsi and start getting curious about Dr. Pepper.

I went to rabble.ca expecting to find a lot of excitement about this. More fool me. The online left is far too busy tilting at Zionist windmills and trying to win the All-Canada Summarize Chomsky Competition to pay any heed to the model for our democracy. But a strong electoral performance by Clegg would provide data for a future debate about the fate and usefulness of a social-democratic party that no longer believes in socialism—and one that, given the excess weight given to labour unions in its leadership balloting, arguably isn’t all that strong on democracy either. Recall that the “Democrat” half the Liberal-Democrat DNA derives from light-pink Labourites who got tired of trade-union bullying and wanted to build a non-militant home for the Left. Thatcher crushed the unions, Labour became neoliberal, and thirty years zipped by, but somehow the Lib Dems have recovered a raison d’être.

It seems highly speculative to imagine that such a thing could ever happen to the NDP. (I’m not aware that there exists some brand of “awareness of one’s own irrelevance” fairy-dust that can be sprinkled on NDP supporters.) Of more immediate concern to Canada is the possibility that a strong Lib-Dem result could a) create pressure for the adoption of proportional representation in the UK and b) bring about the conditions for its immediate adoption as the price of Liberal-Democrat participation in a governing coalition. If the three UK parties were each to get the exact same numbers of votes on May 6, with the regionally distorted riding-by-riding distribution remaining about the same, the seat distribution in the Commons would end up being roughly LAB 300-CON 200-LIB 100.

I don’t think there is necessarily a major ethical problem with this, particularly since what it practically amounts to is giving Scotland and Wales something more like an equal say in British government and protecting them from being demographically overrun. Only a crazed extremist for “democracy” in the strictest technical meaning of the term would argue that Scotland and Wales should have influence on Parliament not one iota greater than their nose count. The effect of “first past the post” in current British politics is much the same as that of the U.S.A. giving equal representation to the states in the Senate, and, by extension, giving smaller states a disproportionate say in the Electoral College.

Still, this election may provide a tough, maybe destructive test of tolerance for that arrangement—particularly in the light of ever-louder murmurs of English nationalism and English awareness of the West Lothian Question. (The existence of Welsh and Scottish assemblies considerably weakens the argument that Parliament can never revise constitutional arrangements in a manner contrary to the interests of Wales and Scotland, and the argument isn’t totally decisive anyway.) A fiasco for first-past-the-post would be bad news for its future here; its abandonment in the UK as part of a power-sharing deal would make us stick out like a sore thumb. Even pro-FPTPers can’t deny that.