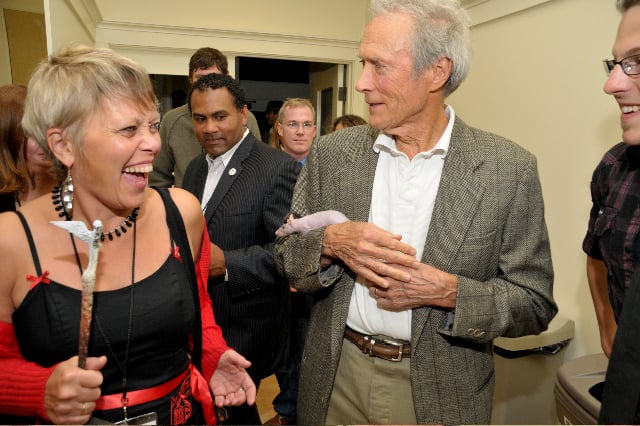 Penelope Buitenhaus with Clint Eastwood (and unidentified rat) in Carmel

For an 80-year-old, Clint Eastwood is one busy dude. But just before jetting off to the premiere of his latest movie, Hereafter, which closed the New York Film Festival, he found the time to honour a Canadian filmmaker at a much smaller festival, in his home town of Carmel, California. Last week Eastwood was on hand at the Carmel Art and Film Festival to present Penelope Buitenhuis, the director of A Wake, the prize for best dramatic feature. Starring Martha Burns, Graham Abbey and Nicholas Campbell, the movie is a darkly comic improvised drama about former theatre colleagues who reunite for the funeral wake of their infamous director. “Everybody warned me that Clint never talks,” Buitenhuis told me. “Even when he directs, he doesn’t say much.” But as she struck up a conversation with him backstage at the Carmel awards, he became positively chatty. “I was shocked at how incredibly young he is in life,” she said. “You’d never know he was 80 years old. He’s really fit and strong. And very approachable in a stoic kind of cowboy way. We laughed about directing and why we got into it, and he said he thought he had more to say than just with his poker face in front of the camera.” Eastwood is legendary for his efficiency on the set. So when it came time to pose for a photo with Buitenhuis, his director discipline soon kicked in. As the camera flashed, he said, “How many shots do you need? I get mine in three takes.”

FILED UNDER: A Wake Penelope Buitenhuis