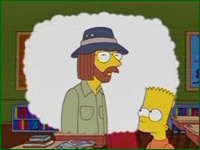 What got me back on this subject was the release on DVD this week of season 12 of The Simpsons, the last of four seasons run by Mike Scully. Scully gave almost unmatched power to one of The Simpsons‘ longtime writers, George Meyer, who by season 10 or 11 was so influential in the rewrite room that its whole comedy style was his more than any other person’s, including Scully. (On the commentaries you can sometimes hear the writers saying either that a joke came from Meyer ,or that it was inspired by his style, or that they’re just proud that the joke made Meyer laugh.) To me this is a partial explanation of why most of the Scully episodes are hard for me to watch, because Meyer specialized in a type of joke that is often more appropriate for his underground comedy magazine Army Man than a TV situation comedy. It’s sort of a joke about a joke, where the humour is supposed to come not from the characters and their reactions to their situations, but from the writer’s attempt to put his own ironic twist on the thing you might expect to hear in that situation.

The example I always use from season 12 of The Simpsons — I don’t know if Meyer came up with it, but it certainly is a Meyeresque joke — is when Grandpa Simpson says that he was such a great grifter in his youth that “They used to call me Grifty McGrift.” The line is supposed to be funny because it’s not funny, because in a spot that normally calls for a funny turn of phrase, the writer could not come up with any turn of phrase at all, and just repeated the word “Grift” twice. Another favourite George Meyer joke technique is to have a character describe a plan as “Operation ______” and then fill in something that’s just a straight, prosaic description of whatever he’s going to do: “Time for Operation Mail-Take.” “Now for Operation Strike Make-O Longer.” “Now for Operation Christmas-Remind-Her-Of-How-Good-Is.” (A George Meyer line that was cut from an early episode, according to a commentary, was “You couldn’t find Mr. Burns’ inner goodness with a Mr. Burns’ inner-goodness-finding-machine.”) It is not really a joke, it’s, as someone else put it, a parody of bad writing. And that’s why I think of it as comedy-writer comedy, because it references their own struggles in coming up with jokes and their own intimate knowledge of old joke structures. It never once sounds like anything an actual human being might say. This also applies to jokes that are based on the assumption that it’s funny to hear a deliberately awkward turn of phrase, like “Don’t worry, I’m not a stabbing hobo, I’m a singing hobo,” or “She changed her name to Appleseed and her family changed theirs to Buffalkill.” The main joke there is just that it sounds a little weird.

These jokes are fine in small doses, surrounded by bread-n’-butter character, situational and un-ironic jokes. (And in the good years of the show, Meyer came up with lots of lines that are just funny because of the character saying them, like Homer watching the Three Stooges and saying “Moe is their leader!”) But by the Mike Scully era, every episode was wall-to-wall jokes like that. It’s not just a George Meyer thing, because he’s not involved with Futurama, and that show has pretty much always consisted of nothing but jokes-that-aren’t-really-jokes (I’ve come to the conclusion that Futurama really is a pretty weakly-written show much of the time).

30 Rock has a lot of jokes like that too (most of them coming from Tracy, like “foxy boxing combines my two favorite things, boxing and referees!” — see, it’s funny because it makes no sense!), but manages to make up for it by including lots of simple, effective and even corny jokes. Writer-type jokes are fine, in moderation. When they take over, there’s not a moment when you’re not being reminded that someone is writing this thing.

I actually find The Simpsons more tolerable to watch now, when Meyer is no longer on the full-time staff, than I did in the Scully era; the actual quality of the jokes isn’t better — mostly consisting of really lame-o puns — but I find a pun to be a more acceptable than constant lines like “put down that science pole!” and “hey, what’s with the attitude? I just wanted some dealies.”

Update: The next-to-last paragraph originally ended in mid-sentence, as pointed out in comments. I’d like to say this was conscious performance art, but it was not. Fixed.

Update 2: Lots of interesting comments. I should add that back in the ancient 1990s, I would usually cite my favourite Simpsons line of all time as Bart’s “My God, he is like some kind of… non-giving-up… school guy!,” which is perhaps the ultimate, textbook example of the self-reflexive, joke-about-not-making-a-joke construction I’m talking about here. And when I see that episode, that line still makes me laugh a lot. Which means: a) It all depends on context b) These jokes are fine in moderation c) I’m a hypocrite d) All of the above, but with special emphasis on the hypocrite thing.

FILED UNDER: The Simpsons Writing