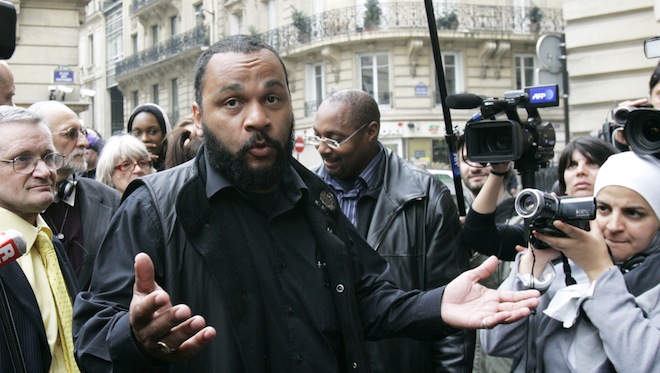 Extend your arm so that it’s pointing at the ground. Then place the hand of your opposite arm above the shoulder of the extended arm. You’ve just performed the quenelle. Hopefully you didn’t do it in polite company or on French television, because it’s currently France’s most verboten gesture. Doing it in public has become, in some cases, a firing offence.

The quenelle is the creation of Dieudonné M’Bala M’Bala, a French comic who, over the course of his decades-long career, has gone from being the darling to the bête noire of France’s political and media establishment. Not coincidentally, this falling out of favour coincided with Dieudonné ever-growing obsession with the Jews and Zionism. His one-man shows, once uproariously funny, have essentially become weird digressions into the supposedly caustic effect of both on French society.

Jews, he opined in 2002, “are a sect, a fraud. They are among the worst because they were the first.”  He has called Holocaust commemorations “memorial pornography” and joked how Jews themselves are conveniently obsessed with reminding the world of their suffering. French courts have condemned him numerous times for his words, though he’s found a loophole to avoid paying the fines. A lefty by practically by birthright—his mother was a painter and sociologist—he is today in constant flirtation with France’s far right.

In short, comedian Dieudonné is a hateful little twit. Dieudonné the self-promoter, on the other hand, is a genius—a man who has grown rich, popular and powerful essentially by bottling and selling the near-constant outrage directed towards him. And whom does he have to thank the most for making him rich, popular and powerful? His supposed foil the French government, which in its ham-fisted attempts to silence him has time and again fallen victim to his shtick. The most recent demonstration of this is the quenelle.

Dieudonné first performed the quenelle—literally, “dumpling”—in 2005 during one of his shows. He did so offhandedly during a stream of consciousness bit about the great mammalian plot against humans. “Today, dolphins look down on human beings. They know they can shove their fins right up our asses,” he said, indicating on his right arm with his left hand exactly how far those dolphin fins could reach. The quenelle was born.

Dieudonné has since used the gesture in his campaign posters in 2009, when he ran unsuccessfully for European parliament. In the posters, which call for a “Liberated Europe,” the comic notably stands next to Alain Soral, a notorious anti-Zionist whose knack for self-promotion nearly rivals that of Dieudonné.

The quenelle has since taken on different meanings for different people: for some, it’s a show of solidarity for the oppressed. For others, it’s a cutesy way to demonstrate one’s displeasure with the political status quo, or a grab bag of apparent sacred cows (including, naturally, the Holocaust.) It’s this last bit that is most troubling: given Dieudonné’s obsession with all things Jewish and Zionist, many see it as a blatantly anti-Semitic gesture akin to the Nazi salute.

Regardless of the meaning, those who perform the gesture are likely all supporters of Dieudonné, which is perhaps the reason why the comic is so gleeful these days: many, many people are doing it. Superstar soccer players, politicians, military members, reality TV stars, and thousands upon thousands of regular Joes: in France, the quenelle is everywhere.

Successive French Presidents from Jacques Chirac onwards have attempted to shut Dieudonné up, resulting in dozens of cancelled shows. In 2009, Nicolas Sarkozy’s government attempted to have him banned from running for European parliament. Dieudonné was giddy at the news, going so far as to call Sarkozy spokesperson Claude Guéant “my press attaché” when I interviewed the comic that year. “Attention, buzz, it’s not positive or negative. It just is. I’ll take either. I’ll play the bad guy if they want,” he said.

The current government of François Hollande has only ramped up the anti-Dieudonné offensive. It has put its military and civil service on notice: doing the quenelle is a potential firing offence. French interior minister Manuel Valls successfully urged the cities of Bordeaux, Tours, Orléans and Nantes to cancel his upcoming shows. “It’s a victory for the republic,” said French interior minister Manuel Valls.

Dieudonné’s longevity and burgeoning popularity would suggest, however, that it’s a victory only for Dieudonné. His career has only benefitted from these attempts to silence him. In 2005, the year he first quenelled, Dieudonné “was disappearing from the media spotlight,” as Le Figaro pointed out recently. “His shows were getting cancelled. He was forced to perform his shows on a bus. So he cultivated a counter-culture that bloomed on the Internet.”

It was here where the quenelle went from being a reference to perverse dolphin acts to… well, whatever people wanted it to be: soccer celebration, anti-authoritarian jab, a middle finger to the deeply unpopular Hollande government and, distressingly, ersatz Nazi salute. Absurdly, quenelle hysteria forced a Parisian store to temporarily close it doors. It seems staff received several death threats after one of its mannequins was left in the quenelle position. (The mannequin in question was actually modeling a purse someone forgot to install.)

Dieudonné, meanwhile, certainly isn’t performing in buses any longer. He owns his own theatre, where he regularly performs to guichet fermé. His Bal des Quenelles, a yearly festival celebrating the quenelle as well as the comic’s uber-offensive ditty about the holocaust known as “Shoananas,” draws legions of his fans from across Europe. “2014 will be the year of the quenelle,” he declared in a recent video. Indeed: as the thousands-strong pro-Dieudonné demonstration in Nantes demonstrates, the government’s role in canceling his shows has elevated him from hateful little man to free-speech martyr. By provoking the government into acting like the thuggish caricature he and his fans believe it to be, he’s made his idiocy matter.

Attacking Dieudonné shouldn’t be the job of government, but of his fellow comics. He is ripe for satire, and not only because his obsessive focus on the Holocaust has turned him into a one-note comic. The supposed populist actually trademarked the quenelle, and threatened legal action (against his friend Alain Soral!) when he thought it was being misused. The supposed free speech advocate called the publishing of the so-called Mohammed cartoons “spitting in the face of Muslims.” And the supposed humanist has expressed his support for Syria’s Bachar Al Assad.

In short, Dieudonné should be shown for the bumbling inconsequence that he is. That today he is anything but is the fault of those, the French government included, who try to silence him.