Coppola and Cannes in the wild 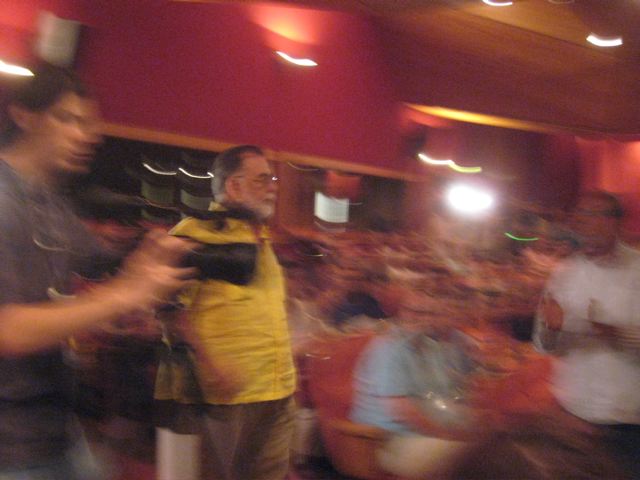 Trying to capture Cannes is an elusive game. The place gets lost in translation. I’m surrounded by thousands of other journalist trying to do just that, the pixilating horde of wired media. Films are seen, interviews granted, pictures taken, but the day’s impressions run through your fingers as fast as celluloid past a hot lens. So here’s a free-associating harvest of impressions, typed after midnight, because they’ll be gone by dawn:

• Thinking back on Up, the 3D animated feature that opened the festival, and remember that I’d forgotten to mention one of the most salient features, the way the subtitles floated in front of the image. You learn to become injured to subtitles, especially in Cannes where with some films they are stacked in both French in English. But we’ve never seen 3D subtitles before, and here they were upstaging the image, dimensionally at least.

• I saw Francis Ford Coppola’s Tetro open the Director’s Fortnight this morning—a theatrical drama about art, showbiz, tragic accidents, revolving around a volcanic family that seethes with Freudian fear and loathing. Amazed and bewildered, I came to realize this was the work a retired filmmaker, a winemaker who has rediscovered cinema as a hobby which can pursue without the usual restraints. Once upon a time in America, Coppola was filmmaking his way out of a black hole of debt. Now he’s a self-financing auteur accountable to no one, and to nothing but his own whimsy. It makes you wonder if art needs obstacles.

• Luciously photographed in black-and-white,  Tetro is quixotic adventure in filmmaking, the work of a grand old man of cinema trying to take the creative risks he could never afford when he was in his prime. It’s as if Coppola is time-travelling back to the European New Wave, crafting his own private 81/2, consequences be damned.

• Set primarily in Buenos Aires, then flying off the rails in an odyssey to an absurd arts festival in Patagoinia, Tetro is about warring brothers and a sinister  patriarch. The brothers are played by the ever-irritable Vincent Gallo, whose ego is well used as an embittered expatriate, and Alden Ehrenreich, who plays his estranged kid brother. Watching Ehrenreich, I spent much of the film trying to place this strangely familiar actor.I He’s  like a cross between a young Leonardo DiCaprio and Emile Hirsh, and I was sure I’d seen him in something. Only afterwards did I learn he’d never been in a movie before. An actor to watch

• Coppola has cast two fabulous Spanish women: Maribel Verdú of Y tu mamá también fame and Pedro Almodóvar diva Carmen Maura, who could have been one of Fellini’s women. The film’s style is reminiscent of Almodóvar, but without the realism or rigour; and of Fellini, but without the lyrical surrender to madness (Coppola is an incurable moralist). Magic realism, Eugene O’Neill, Freudian psychodrama, bohemian theatricality, celebrity satire–Coppla served up quite the antipasti platter. Trapped in one of those critical paradoxes, I found myself happily  browsing the buffet–oddly enjoying the film and marvelling at its unleashed eccentricity, without buying it for a second.

• More dramatic than the movie itself was Coppola’s entrance. A good five minutes passed after the closing credits as we waited for the Great Man, whose physical proportions have become almost Wellesian. I’ve never seen so many TV cameras in a cinema before. Waiting for the Auteur as Rock Star. Coppola, in a canary-yellow shirt took it in stride. He sat on the stage with his son, Roman, plus several of the actors, and answered questions. He said the movie was very personal, and it is one of just three that he has wirtten himself. His father, like the patriarch played by Klaus Maria Brandauer onscreen, was a celebrated composer/conductor. As Coppola explains it: “Nothing in the story really happened but everything is true.” Ah, that old ruse.

I’d promised you fleeting impressions of the day, hoping for something more scattered, not just a series of bullets. But I got carried away with Coppola. C’est la vie. . .

To keep typing at this hour would be folly. I’ve got to be up bright and early for Bright Star, the new Jane Campion movie. She hasn’t made one in six years, not since getting Meg Ryan buck naked with Mark Ruffalo for In the Cut. Can’t wait to see what’s been on her mind.