'Creation' and survival of the TIFFest 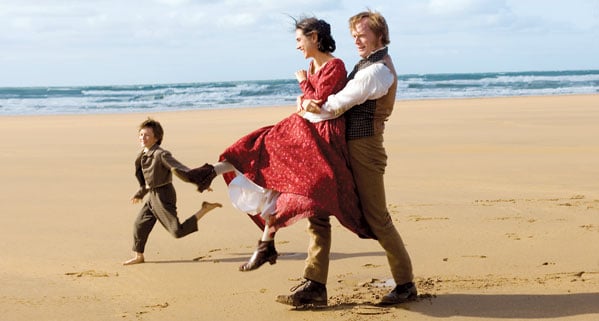 I hate to rain on the parade before TIFF has barely begun, but I found the opening-night gala, Creation, to be underwhelming. Over the years, there’s been an unwritten rule that the festival open with a Canadian film. Sometimes, however, it’s impossible to find a Canadian film that is good enough, mainstream enough for the corporate opening-night crowd, and large enough to hold its own in the cavernous Roy Thompson Hall. Also, it’s nice to have a movie with some actual movie stars to kick off the world’s most important festival next to Cannes. This year the obvious choice would have been Atom Egoyan’s Chloe, which stars Liam Neeson, Amanda Seyfried and Julianne Moore. I haven’t seen Chloe yet, but from what I’ve heard it’s far more accessible than most Egoyan films—it was, after all, produced by Ghostbuster mogul Ivan Reitman. (For my story about Ivan and Atom on the set of Chloe, click on Odd Couple.) This year’s opening night spot would have been available to Chloe, but Egoyan didn’t want it. His producers are selling his movie to distributors at TIFF, and they want the best possible audience for it—the socialite crowd that shows up on opening night is less than ideal.

So, given that TIFF decided to break with tradition and open with a non-Canadian title, it had a much larger range of options. And I fully expected that Creation would be an inspired choice. It certainly looks good on paper. It’s a movie about Charles Darwin that’s nicely timed to coincide with the 200th anniversary of his birth and the 150th anniversary of his game-changing book, Origin of the Species. It’s a movie about Big Ideas at a time when a raging debate between creationism and evolution, and faith vs. reason, has become hugely important, especially in America. And it boasts a couple of strong actors who are also stars, though not of the super-nova variety—Paul Bettany and Jennifer Connelly, the co-stars of A Beautiful Mind, who are once again playing the role they play in real life: husband and wife.

But Creation is not half as smart as it pretends to be. It’s the kind of movie that tells you what to think, and feel, every step of the way. But it starts out with great promise.

British director Jon Amiel succeeds in illustrating Darwin’s evolutionary theories with lovely time-lapse shots of natural decay and growth. The man is struggling to complete The Origin of the Species, but he’s wracked by guilt on two fronts—because he’s breaking Christian creationist taboo and he’s haunted by the death of his young daughter, Annie. Midway through, the drama gets stalled in a rut of psychotherapeutic angst, another modern notion that Darwin was apparently on the verge of discovering. And he spends an inordinate amount of time talking to his daughter’s ghost, until he finally blast through his torpor, and restores his failing health, by confronting his demons (and his wife) and purging his guilt. Intellectually, this is all intriguing stuff. But dramatically, it becomes turgid. You just don’t care what happens next. And Connelly is squandered. The bulk of her performance is reserved until the final act, when it suddenly has to rev into full-blown domestic melodrama. Too little too late.

Bettany also appears in TIFF’s closing night gala, another 19th-century spectacle—The Young Victoria, which was directed by Quebec’s Jean-Marc Vallée (C.R.A.Z.Y.) It’s a less ambitious film, but a more satisfying one. It has the kind of subtle shading and wit that Creation so clearly lacks. And given that it’s directed by a Canadian, it might have been a better choice for opening night. The Young Victoria, however, has already played around Europe, and TIFF likes to reserve its opening gala for a world premiere where possible. So TIFF ended up playing it safe, kicking off the festival with a solid, well-crafted, perfectly respectable, yet sadly pedestrian period piece about one of the greatest thinkers ever to squint into a microscope. A beautiful mind is a shameful thing to waste.

For my ongoing list of favorite films at TIFF, go to: The Best of the Fest.