An open letter to Brad Pitt and Angelina Jolie 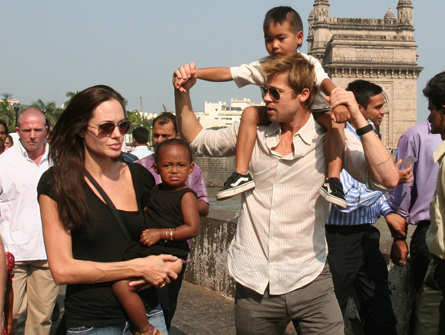 According to new reports, Brad Pitt and Angelina Jolie will soon move one child closer to convening their own underage G20. The couple is said to be looking to adopt a child from India.

An open letter to Brad Pitt and Angelina Jolie:

It has come to my attention – through stories in the press and the telltale sound of millions of orphans simultaneously raising their arms and shouting, “Oooo, pick me!” – that you are thinking of adopting another child. I commend you both on your noble impulse. And I humbly prescribe a provocative course of action as you plan an even larger family.

You should adopt me.

There’s no denying I would be an unconventional choice. For one thing, I am a full-grown adult – which puts me at something of a disadvantage. For instance, I couldn’t find a wicker hamper big enough to leave myself on your doorstep.

But believe me, I’ll fit right in, and not just because I too hate Jon Voight. For instance, you both work tirelessly to ease suffering among the world’s least fortunate – whereas I had an Amnesty International sticker on my math binder in high school.

In media interviews, you’ve indicated that you place a priority on achieving further diversity in your family. Advantage, Feschuk. You are two of the most attractive people on the face of the Earth, whereas I am neither beautiful nor thin. Talk about balancing the ticket.

And that’s not all. Your oldest child, Maddox, is Cambodian. Shiloh was born in Namibia. What a happy coincidence that I too hail from an exotic and mystical land. Perhaps you have heard of Canada? No? Well, it’s very much like the post-apocalyptic world depicted in Mad Max but with more Yeti and taxes. Also, we’ve got this crazy health care system where you don’t even have to pay when you get sick or “accidentally” run over a paparazzo if you catch my drift. What I’m saying is that I know a guy.

In many ways, Brad, I already think of you as a father. I find myself reflecting on the quality time we’ve spent together alone, just the two of us, such as when I went to see Meet Joe Black. As for you, Angelina, you’re never far from my thoughts. In fact, I’m thinking about you right now. I’m thinking about you in that scene from Mr. and Mrs. Smith, the one near the beginning when you’re in that slinky white top and … oh my… the cleavage and the… uhh…

Mom and Dad – I’m not taking anything for granted but I’ve already picked out some cool Star Wars wallpaper for my room and text messaged Jennifer Aniston to call her a bitch. I also checked with my “real” father and he’s cool with this, so long as you answer one question that’s of the utmost importance to him: what is Susan Sarandon’s phone number? He’s getting nowhere just standing outside her house.

I know that some may view this adoption pitch as a cynical gambit – a shameless ploy to be welcomed into a wealthy and also rich family in a caring and, my lawyers tell me, legally binding in perpetuity way. But I’m just an ordinary human being with ordinary human needs. I crave the simple things in life: a chuck on the shoulder from my new Dad to signify his approval, a kiss from my new Mom to signify her love (maybe, if I’m lucky, her tongue love) and a lucrative three-picture screenwriting deal with Universal.

Let me make a heartfelt pledge to each of you:

Dad, I’ll never embarrass you in public In fact, I’ll hardly ever leave the house at all, what with my busy schedule of trying to accidentally walk in on Mom when she’s coming out of the shower.

And Mom: What time do you typically shower?

P.S. If this arrives too late and you’ve already adopted, please forward this to Ashton and Demi.

P.P.S. But if Madonna calls, you’ve never heard of me.